Venture through a world of soaring frigate birds, dozing sea lions, and delightful penguins on this Galapagos Islands vacation. Travelling aboard a luxury yacht, you’ll enjoy deluxe accommodations and expert service as you visit the diverse Galapagos Islands and see highlights like the Green Beach and Dragon Hill. 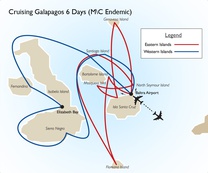 This 6-day Galapagos vacation takes you through the islands aboard a luxury yacht.

Your Ecuador vacation showcases the wonders of the Galapagos Islands, the world’s most biodiverse set of islands. The M/Y Endemic will be your base on your journey through the islands. As the Galapagos’ newest catamaran, the M/Y Endemic carries a maximum of 16 passengers and offers large interiors, high-end amenities, and gorgeous social areas. Enjoy air-conditioning in your cabin and experience a service ratio of crew to passengers that is almost one-to-one, which guarantees personalized and attentive service.

Your journey through the Galapagos begins on Bartholomew Island, where you can see Galapagos penguins and experience the panoramic views of Sullivan Bay and famous Pinnacle Rock. Pass on to Floreana Island, where you’ll explore the Green Beach at Cormorant Point, which runs a deep green due to the olivine crystals in its sand. Head out onto the water to see the Devil’s Crown, an underwater crater that looks like a sinister crown. Then head back onto land at Post Office Bay, where you’ll see the Post Office Barrel that has served as a mailbox since the 18th century. Complete your exploration of Floreana Island by climbing to Baroness Lookout where you’ll enjoy spectacular views of the island.

Continue to Santiago Island and visit Chinese Hat, a small islet to its southeast that resembles a rice-picking hat when viewed from land. You’ll find plenty of sea lions and iguanas on Chinese Hat. Head southeast to North Seymour Island, a tiny island covered in low brush that’s home to the largest frigate bird colony in the islands. Watch these birds fly high through the air. The next day, pass on to Mosquera Island, a tiny islet between Baltra and North Seymour that’s home to sea lions and gulls who colonize the lava fields.

Pass onto Santa Cruz Island, where you’ll climb Dragon Hill, crossing through a rocky landscape populated by land iguanas on route to a lagoon covered with flamingos. Pass on to Genovesa Island where you’ll stroll along the sandy beach of Darwin Bay and climb the stone staircase of El Barranco, which leads to a plateau of masked boobies and storm petrels. Return to Santa Cruz Island to explore the famous Twin Craters before continuing to Santiago Island, where you’ll pass over the volcanic landscape of Sullivan Bay and see a white-coral sand beach.

After lunch, you will discover Bartholomew Island. Once here, you will ascend to admire the spectacular panorama of the Sullivan Bay and the famous Pinnacle Rock. The beaches at the foot of the Pinnacle Rock are excellent for snorkeling from which you can discover the marvelous underwater world.

In the morning, after breakfast, the first spot to be visited is Cormorant Point. You will land on a green olivine sand beach. Following a 100 meters long path you will soon reach a lagoon with flamingoes.

Later, the next visit will take place to Devil´s Crown that is an underwater volcanic crater, almost covered completely by Galapagos waters. Just a small portion of the rock formation can be seen from above and it looks like a crown. The underwater world is very rich in coral reefs, abundant marine species. Birds are also part of this visitor point due to its location in open waters.

Then, you will go to the Baroness' Lookout (Mirador de la Baronesa).This viewpoint is located on the north of the Floreana Island. The way up and trail is very easy, steps are placed in this area for security. Your naturalist guide will tell the murder and mystery legend of the Baroness.

In the morning, after breakfast you will visit Chinese Hat, which is a small islet off the south coast of Santiago, with a maximum elevation of 160 feet (52 meters). Though within easy reach of Santa Cruz, Sombrero Chino is typically only visited by those aboard a Galapagos Cruise.

In the afternoon, North Seymour Island will be discovered. It is located slightly to the north of Baltra. It is a low, flat island, formed by submarine lava formation uplift. Covered with low, bushy vegetation, it contains the largest colony of magnificent frigate birds in the Galapagos. There is also a large population of blue-footed boobies that perform an amusing courtship dance when nesting conditions are right.

In the morning, you will visit Mosquera, a small islet found between Baltra &amp; North Seymour Islands. Lava gulls, sea lions, Sally light foot crabs inhabit this sand bank with an extension of over 600 meters. It also hots the largest populations of sea lions and orca whales can be seen occasionally depending on the season you visit the islet.

In the afternoon, the visit to Dragon Hill will take place, which is located in the north-western part of Santa Cruz Island. Here you will have the opportunity to walk into the island and view the land iguana. Be among these magnificent reptiles that just a few decades ago were on the brink of extinction.

Moreover, at Dragon Hill you will see a flamingos' lagoon, pintail ducks and other endemic birds including flycatchers and warblers. After a short trek, amazing view awaits us up the hill. Offshore snorkeling before returning to the yacht.

In the morning, visit to Darwin Bay, which is the only sandy beach found in the caldera on Genovesa. Colonies of the Great Frigates are found along the beach. Male exhibit their red balloon pouch to females for hope of a match.

Red-footed boobies nest in the trees in contrast to the other two booby species which do so on the ground.

In the afternoon, we will go to El Barranco (Prince Philip's Steps), a carved out of stone stair. This will lead you to a wide plateau, where you can observe large colonies of masked boobies, frigate birds, storm petrels and ducks. During this easy stroll you will cross a little Scalesia wood, in which you can observe the short-eared owl. The same path will lead you back to your boat.

In the morning, after breakfast, the Twin Craters will be visited. Located in the highlands of Santa Cruz on the road to Baltra airport from Puerto Ayora, the Scenic Twin Craters are approximately 30 meters deep. These two huge land depressions are surrounded by a Scalesia Forest with abundant birds such as yellow warbler and the Vermilion Flycatcher. Gorgeous views of the leafy green highlands forest are also part of the visit. Then we will continue our journey to board the M/C Endemic.

After this last visit, transfer to Baltra airport for your return flight to mainland Ecuador.
Assistance and farewell at the airport.