Spend 8 days uncovering the natural wonders of the Galapagos Islands. You’ll have the opportunity to snorkel and hike while evenings are spent aboard Coral I, a stylish and luxurious yacht. 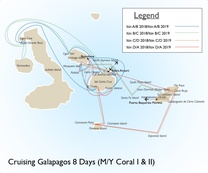 For itinerary details please click the above itinerary tab.

Today marks your departure from mainland Ecuador to Baltra (approx. 2 and half hour flight). You will be picked up at the airport by your guides and taken on a ten minute bus drive to the pier to board the Corals.

In the afternoon, make a dry landing on Santa Cruz for a visit to the Galapagos giant tortoises breeding program, where the famous Lonesome George (last surviving specimen of Pinta Island) lived for decades. The center is conducted by the Galapagos National Park staff with the collaboration of scientists from the Charles Darwin Station. Here, eggs taken from Pinzon, Santiago and Santa Cruz Islands hatch without the danger of introduced species. After artificial incubation; the "galapaguitos" (newborn tortoises) are reared until the age of 5, when they are released in their native habitats, having the capabilities to survive alone. Since the 70s, more than 2000 specimens have returned to their own islands. In addition, the Darwin Station works in several scientific projects, botanical research, providing environmental education to communities, schools within the Islands and tourists. If there is enough time, it is possible to visit Puerto Ayora.

In the morning, walk by a brackish lagoon to see flamingos. The trail leads across a typical dry zone vegetation. Keeping up until Dragon Hill, there will be an important nesting ground for endemic land iguanas, offering lovely views of the anchored boats and neighboring islands. The forest is home to mockingbirds, Darwin's finches, yellow warblers, and Galapagos doves.

This afternoon make a wet landing to discover a fascinating landscape formed by different volcanic parasitic cones -lava bombs, spatter, cinder cones - that resembles the moon. Going up to the summit there will be an impressive view of the surrounding islands, including the eroded tuff cone Pinnacle Rock. We also encounter marine iguanas, lava lizards, and blue-footed boobies.

Beach time is a great opportunity to do snorkeling and see the famous Galapagos Penguins, sea turtles and White-tipped Reef Sharks among a great variety of colorful fish. For many visitors, this may turn out to be the best snorkeling experience. Crystal clear water is the perfect spot to appreciate the incredible marine life it has to offer.

Due to its geographical location, the lack of vegetation is immediately noticeable however, there are pioneer plants including the endemic Tiquilia nesiotica and Chamaesyce (known as sand mat or spurge in English), lava cactus, and Scalesia bushes.

This morning you will explore Rabida, also known as Jervis Island in English, one of the most diverse in terms of volcanic activity as it lies at the very heart of the archipelago's volcanic origin. In this deep red beach, surrounded by cliffs and steep slopes of volcanic cinder cones it is usual to find nesting colonies of brown pelicans, as well as, nine species of Darwin finches, fur seals, and Nazca boobies. Snorkel off the coast, where marine life is particularly active and colorful.

During the afternoon, you will visit Buccaneers Cove / Espumilla Beach in Santiago Island.

This is an amazing location, featuring the remains of an eroded shoreline that is home to seabirds, fur seals and the playful sea lions. Its different shapes have been made throughout a process caused by erosion of the waves and the wind. Espumilla Beach is a white-sandy beach in James Bay and is a popular place among visitors. There are mangroves and a small palo santo forest that lead to salty-water lagoons that are home to wading birds like flamingos. In the upper dunes are a nesting site for sea turtles. A good place to snorkel to see rays.

This morning enjoy a dinghy ride on the north shore of Santa Cruz Island, accessible only by sea, where four species of mangrove crowd form an internal lagoon. Turtles visit the calm waters, peaking their heads above the surface, while the fish and rays circle below. White-tipped reef sharks can be seen beneath the boat, plus seabirds including pelicans, herons, and egrets feed from the cove. This cove has been declared as a "Turtle Sanctuary".

This afternoon you will have a dry landing. In the mountains of Galapagos is possible to admire different kinds of birds, such as tree and ground finches, vermillion flycatchers, paint-billed crakes, yellow warblers, and cattle egrets (usually standing on the tortoises' shell). The journey to the reserve offers great opportunities to see the contrasts that the island offers in reference to the variety of ecosystems. The road goes from the coast through the agricultural zone and straight up to the dense humid forests. Often, Galapagos Giant Tortoises are also seen on the way, wandering through pastures in the paddocks. This spot is a birdwatchers' haven since almost every land bird present on the island lives or migrates here.

Explore Vicente Roca point, a high peak of land created out of remains of a tuff cone, with two protected turquoise coves on both sides. One of them, the Bolivar Channel is one of the richest marine ecosystems on Earth. This place is only accessible by water, with great opportunities for deep-water snorkeling. In this part of the Galapagos, the upwelling of cold water currents from the west, offer an abundant plankton supply for marine species like red-lipped batfish, seahorses, frogfish, nudibranchs, octopus, and the mola-mola or sunfish. It is common to observe dolphin pods, sea lions rafts, and tuna banks. The dinghy ride along the coast will allow observing a great diversity of seabirds like noddies, brown pelicans, Galapagos penguins, flightless cormorants, Nazca and Blue-footed boobies are often seen feeding all at once during the cold season (May - December). Whale watching is also common while navigating.

Later, make a dry landing at Espinosa Point, the only stop on Fernandina, from where you can see the island of Isabela across the Bolivar Channel, an area that boasts some of the highest diversity of endemic sea fauna in the Galapagos. The largest, most primitive looking race of marine iguanas are found mingling with sea lions and Sally Lightfoot Crabs. This is a wonderful opportunity to encounter flightless cormorants at their nesting sites, Galapagos Penguins and the Galapagos Hawk, the King of predators on the Islands.

This morning, make a wet landing on a volcanic 'black' beach. Depending on the season, you may find giant tortoises, land iguanas and the unusual flightless cormorant. After a short walk inland, snorkeling time is allotted, giving you yet another chance to swim with sea turtles, sea lions and countless tropical fish. Urbina Bay features a wide variety of plant life that changes depending on season. You can observe the beautiful colours of plants that attract different insects, birds and reptiles. The tour will explore the uplifted coral reef that resulted from 1954 volcanic activity, with a spectacular view of Alcedo Volcano.

This afternoon, make a dry landing on Galapagos' largest island where you will learn about the eruption of the five volcanoes that form it. The trail leads to Darwin's salt-water crater Lake and excellent views of lava fields and volcanic formations. Later, return along the same path for a dinghy ride along a shoreline full of marine wildlife where you will admire a variety of seabirds such as Blue-Footed Boobies, Brown Noddies, terns, flightless cormorant and depending on the season, Galapagos Penguins. Galapagos Penguins, which only reach 35cm in height, are the only penguin species in the world to extend its range into the northern hemisphere along the equator. They are monogamous and lay their eggs in small cracks of lava on the lower parts of the island near the shoreline as not to be reached by the ocean waves. The population of penguins on the islands is about 2 000 individuals most of which live on this western portion of Isabela with others scattered further south on the island. You will have an opportunity to snorkel in deep water. Graffiti believed to be have been left by 19th century pirates is a curious reminder of an intriguing past.

This morning you will make a wet landing. Egas Port is a black volcanic sand beach, visited by Darwin in 1835. The first section of the trail is formed of volcanic ash (eroded tuff) and the other half is an uneven terrain of volcanic basaltic rock. The unique, truly striking layered terrain of Santiago shore is home to a variety of animals including the bizarre yellow-crowned night heron and marine wildlife including lobster, starfish and marine iguanas grazing on algae beds alongside Sally light-foot crabs. It is easy to see colonies of endemic fur seals swimming in cool water volcanic rock pools.

Later today, you will make a wet landing. This site located at the southeastern portion of Santiago Island is of important geologic interest. It features extensive relative young pa-hoe-hoe lava flows formed during the last quarter of the 19th century. In the middle of the lava flow, older reddish-yellow-colored tuff cones appear. Mollugo plants with their yellow-to-orange whorled leaves usually grow out of the fissures. Walking on the solidified lava gives the impression of been in another planet. Tree molds are found, indicating that in that position large size plants grew in small crevices, until the lava flow of past eruptions burned down the flora of the island.

This morning you will make a wet landing. On the north side of Santa Cruz; behind the beach lies two small flamingo ponds were iguanas sunbathe, see coastal birds, Darwin finches, mockingbirds, and gulls, as well as interesting native vegetation like red and black mangrove, salt bushes. This beach is one of the main sea turtles nesting sites in the Galapagos. A turtle can lay eggs 3 or 4 times per season with an average of 70 eggs each time. At this paradisiacal site, we will also find the remains of barges that sank a long time ago, when the United States Navy operated a base during World War II on Baltra Island. Local people modified the word barges to "Bachas".

Later, you will be transferred to the airport for your return flight to mainland Ecuador.