FIRST-CLASS | CRUISE: Experience the diversity of the Galapagos Islands as you spend 8 days sailing aboard the luxurious Legend. Take the time to get close to wildlife as you hike and snorkel around the islands. 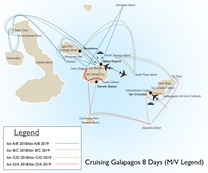 Nowhere embodies the spirit of eco-travel like the Galapagos Islands. They have inspired nature lovers all the way back to Charles Darwin, and today draw visitors from all parts of the globe. As the world’s second largest marine reserve after the Great Barrier Reef, the Islands are perhaps best experienced on a guided cruise. See Blue-footed Boobies, sea lions, and the famed Galapagos Tortoise. Then relax after each day’s discoveries aboard your first class vessel. The Legend sleeps 100 passengers with a commitment to luxury and privacy. Multilingual naturalist guides are onboard, along with a concierge and 24-hour medical service.

At the base of Dragon Hill, Ballena Bay gets your visit off to a picturesque start, its beach highlighted by green olivine crystal sands. Marine iguanas and sea birds also dot the landscape. Land on a volcanic sand beach visited by Darwin in 1835. You’ll find a wide variety of bird and sea life here, including endemic fur seals, who keep cool in the volcanic rock pools. Pass lava lizards and Blue-footed Boobies as you hike to the summit of the island. You may even have the chance to swim with Galapagos Penguins, sea turtles and Whitetip Reef Sharks.

Make another dry landing at North Seymour. Many of the Islands’ biggest stars can be found here, including Blue-footed Boobies and sea lions. Spend a day at Bachas Beach. A prime nesting spot for sea turtles, the beach is also the final resting place of numerous US Navy barges operated here during World War 2. In fact, the name ‘Bachas’ is derived from how the locals pronounce ‘barges’.

Santiago and Rabida Islands are the epicenter of the Galapagos and home to its most diverse volcanic ecology. A number of birds nest here as well, including Darwin’s finches and Brown Pelicans from July to September.

Isabela is the largest of the Islands. Tour the coral reef that emerged following volcanic activity in 1954. Learn more about the eruptions that formed the archipelago, before following the trail to Darwin’s Salt-water Crater Lake, to see the effects of this history first hand. This is another haven for the Islands’ birds, including the Galapagos Penguin, the only penguin whose range extends into the northern hemisphere.

Large marine iguanas and sea lions can be found at Espinosa Point. You’ll also see flightless cormorants and the king of local predators, the Galapagos Hawk. Go deep water snorkeling at Bolivar Channel, admiring the coastal birds as you explore in a dinghy. Your final day is devoted to the giant tortoises of Santa Cruz.

Mainland to the Galapagos, Bartolome

This morning, take a flight departing from mainland Ecuador heading to Baltra (2.5 hours). Upon arrival, you will be picked up at the airport and take a 10 minute bus ride to the pier to board the Galapagos Legend.

This afternoon make a dry or wet landing at Bartolome Island. Discover a fascinating landscape formed by different volcanic parasitic cones -lava bombs, spatter, cinder cones - that resembles the moon. Going up to the summit there will be an impressive views of the surrounding islands, including the eroded tuff cone Pinnacle Rock. We also encounter marine iguanas, lava lizards, and blue-footed boobies.

Beach time is a great opportunity to do snorkeling and see the famous Galapagos Penguins, sea turtles and White-tipped Reef Sharks among a great variety of colorful fish. For many visitors, this may turn out to be the best snorkeling experience. Crystal clear water is the perfect spot to appreciate the incredible marine life it has to offer.
Due to its geographical location, the lack of vegetation is immediately noticeable however, there are pioneer plants including the endemic Tiquilia nesiotica and Chamaesyce (known as sand mat or spurge in English), lava cactus, and Scalesia bushes.

This morning, make a dry landing on the northern part of Plaza Island. The walk will begin with an impressive cactus forest surrounded by land and marine iguanas. As you reach the highest point, you may encounter tropic birds and a bachelor sea lion colony.

South Plaza has a large colony of the smaller sized land iguanas.The population is approximately 300 individuals. They feed on all kinds of vegetation, but during the dry season suvive on the fruits and flowers of Opuntia cacti. Due to their geographic and genetic proximity with marine iguanas, you will also encounter the unique Galapagos hybrid iguana.

This afternoon you will visit North Seymour Island. This landmass was formed by a series of underwater volcanic eruptions, which deposited layers of lava on the ocean floor. An approximately two-hour walk amidst large nesting colonies of blue-footed boobies, magnificent and great frigate birds, and swallow-tailed gulls for an in depth encounter with sea bird breeding cycles and sea lions. You will also encounter land iguanas, and on a lucky day, you might even come across the endemic Galapagos Snake.

Today you will make a wet landing on Pitt Islet followed by a high intensity hike on rocky terrain. The trail includes an olivine beach, 90 meters long, and a path that climbs to the top of a volcanic tuff, passing several magnificent viewpoints. This is probably the only site where the three booby species of the Galapagos can be seen together. This is an excellent area for dinghy rides and snorkeling as a wide variety of sea birds can be observed.

Continue with a wet landing at Cerro Brujo, an eroding tuff cone that at several locations is composed of AA lava formations and a beautiful white sand beach that is ideal for snorkeling and sunbathing. You will visit a lagoon where migratory bird species can be seen including Black-necked Stilts, Ruddy Turnstones, Whimbrels and White-cheeked Pintails. Cerro Brujo offers beautiful views of Kicker Rock, the southern part of San Cristobal and the adjacent coast.

Dry landing at Puerto Baquerizo Moreno. You will visit the San Cristobal giant tortoise Breeding Center to learn about the National Park's conservation programs. Enjoy a beautiful landscape on the way to the Reserve. You will also have the opportunity to visit the port village, have a drink or shop for souvenirs.

Later, you will make a dry landing in Puerto Baquerizo Moreno, capital of the Galapagos Islands. Visit the Interpretation Center, an excellent place to learn about the natural history of the Galapagos. The Museum of Natural History displays information on the volcanic origins of the islands, their remoteness from the continent, ocean curents, climate, the arrival of the different species and their colonization. The human history is also showcased, chronologically narrating the most significant events related to the discovery and colonization of the islands.

Continue to Tijeretas Hill which involves a high intensity walk through beautiful landscapes ending with a magnificent view nearby a large frigatebird colony.

This afternoon is a dry landing on an island of geological interest. You will explore volcanic formations and a riveting wildlife including large sea lion colonies, the Espanola mockingbird, Nazca boobies and the spectacular red billed tropicbird. You will also encounter marine iguanas, lava lizards and the colorful Sally Lightfoot Crabs.

A somewhat lengthy hike will bring you among Nazca and Blue-footed Boobies, right up to nesting grounds that sometimes overlap the trail. Other birding favorites include Galapagos Dove, Galapagos Hawk, Swallow-tailed Gulls and the world's largest colony of Waved Albatross (an unequivocal highlight during mating season: May-December).

Admire the island's dramatic backdrop featuring the famous Soplador, a seaward blowhole that shoots water to some 23 m (75 ft) in the air.

In the morning, make a wet landing to visit the Post Office on the north side of Floreana. The bay is so-named because in 1793 Captain James Colnett installed a wooden barrel which served as an informal post office for sailors passing through, who would take letters with them to their destinations. Today, visitors continue the tradition by placing unstamped postcards inside the barrel that should reach their destinations for free. It can take weeks, months, even years, not arrive at all, or even arrive before you!

You may also encounter Darwin finches, Yellow Warbler and lava lizards. This area also provides great snorkeling opportunities with Green Pacific Sea Turtles as well. However, the island is best known for its endemic vegetation: Scalesia villosa, Lecocarpus pinnatifidus, and Galapagos milkwort. Snorkelers can practice on the main beach amongst playful sea lions.

This afternoon, make a wet landing on an olivine green sand beach. You hike from the black mangrove beds to a brackish lagoon, which usually holds one of the largest flamingo populations in the Galapagos. This island features some endemic plants such as Scalesia villosa, white and black mangrove, and holy stick. The trail continues to a beautiful white sand beach, one of the most important nesting sites of Green Pacific Sea Turtles. It is important to avoid walking in the water due to the Sting Rays that may be hiding in the sand which can be dangerous if accidentally stepped on. From the beach one can spot sea turtles and Blue-footed Boobies plunging into the water. The shoreline is also scattered with small reef sharks floating along in search of food.

A coral sand beach marks the end of the trail. You will head back to the olivine beach that you landed on to swim or snorkel amongst sea turtles, reef fish, sea lions and possibly white-tipped reef sharks. A small colony of penguins resides on Floreana and can sometimes be observed as well.

After a dry landing, a 45 minute bus ride will take you to the Santa Cruz highlands located to the northwest of Puerto Ayora, where you will find a natural reserve with giant tortoises. These enormous and slow-moving reptiles are responsible for the island's name and therefore approaching them in their humid and forested abode is always an inspiring adventure. They can weigh between 250 and 300 kg and can live 150-200 years. Additionally, travelers can walk inside surprising lava tubes.

In the afternoon, make a dry landing at Santa Cruz. You will visit the station where the Galapagos giant tortoise breeding program takes place. This visit makes for a great photo opportunity. While at the station, take time to admire a prickly pear cactus forest and a variety of Darwin's finches and other land birds. The Darwin Station also works providing environmental education to communities and schools within the islands and to tourists visiting the Galapagos Islands. You will have some free time to visit the town and shop for souvenirs.

Early this morning you will go to this rocky cliff that offers a great opportunity to explore more the various marine biodiversity of the islands. Do snorkeling among a variety of colorful fish, stingrays, and if lucky, there could be the chance to see the magnificent White tipped shark.

Later, transfer directly to Baltra Airport for your return flight to mainland Ecuador.

Itineraries: Due to government regulations designed to control and protect the impact of tourism, each vessel, based on length of cruise has its own distinct itinerary. The itineraries are designed to allow visitors to visit all regions of the islands and we suggest you request the advice of Goway's Latin specialists as to which itinerary would suit you best.