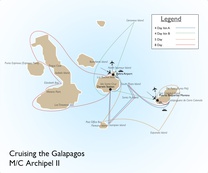 AM: Arrival at Baltra Airport
Upon arrival at Seymour Ecological Airport, a check-up is carried out first, to ensure that no foreign plant or animal species are introduced on the islands. Furthermore, your TCC (Transit Control Card) is stamped; this must be kept safe during your trip, as it has to be presented again on your return flight. In addition, entrance to the Galapagos National Park is due for entry ($100USD), if this has not yet been paid. Your guide will meet you at the airport, assist you with the luggage and accompany you on the short bus ride to the harbour of Puerto Ayora. Here you will climb aboard the yacht Archipel II. After greeting the crew and the captain, your cabins will be assigned to you and then you will enjoy your first lunch on-board.

PM: North Seymour
The tabletop islet of North Seymour is an uplifted part of the seabed. Between the dry shrubs you might perceive a Galapagos land iguana.

You can spot lots of seabirds, such as brown pelicans, red-billed tropic birds, endemic swallow-tailed gulls and seasonally even Nazca boobies. But the main attraction are the archipelago's most extensive breeding colonies of blue-footed boobies and frigate birds. At the start of the breeding season adult frigate bird - males blow up their vivid red pouches to impressive football-sized balloons.

AM: Prince Philip's Steps (Genovesa)
At breakfast time we will sail to nearby Prince Philip's Steps, close to the entrance of the broken caldera. Sometimes a Galapagos fur seal might be resting on one of the shaded ledges. Here you can snorkel once again, and then follow the guided trail through clifftop seabird colonies. At the seaside of the rim, the bushes open up and you can enjoy wide views and the strong sea breeze. Following the exposed rim you will first pass a colony of Nazca boobies and finally reach the extensive storm petrel nesting places, where if you are lucky you can see how the well-camouflaged short-eared owl hunts for them on foot!

PM: Darwin Bay (Genovesa)
Inside the submerged caldera of Genovesa lies Darwin Bay. The small-scaled area will surprise you as find yourself walking along a coral sand beach, crossing barren lava formations and creeks, passing tidal pools, shrubs and further ahead following the top of some cliffs. Every single species has occupied its own ecological niche. Whimbrels and wandering tattlers forage actively along the surf, next to resting Galapagos sea lions. Impressive frigate birds and red-footed boobies nest in the mangroves, where you can also see vocalists such as the yellow warbler, Darwin's finches and the Galapagos mockingbird. Uniquely, two sub-populations of the same species of large cactus finch differ in their singing.

AM: Bartolome
The island of Bartolome rises 114m above Sullivan Bay. Climb the steps of the Bartolome Peak Trail and you will be rewarded with panoramic views over volcanic peaks, lunar craters and lava fields. Afterwards you can refresh yourself at the foot of the famous "Pinnacle Rock" and explore the underwater world in the shallow water while snorkeling. Although there is little vegetation on this island, it has two breathtaking beaches, where sea turtles live. At the foot of the mountain you can also discover a small colony of Galapagos penguins.

PM: Sullivan Bay (Santiago)
The arrival in Sullivan Bay is like a moon landing. The desolate, sprawling fields seem to be mostly lifeless, but this island, which is particularly popular among photographers, still offers a lot to see. There is even some life! Green sea turtles burrow in the small white sand beach, where you can also find crabs, blue herons and oyster catchers.

AM: Charles Darwin Station (Santa Cruz)
Our dinghies will bring you to the touristic pier of Puerto Ayora, from where you will be brought to the Charles Darwin Research Station. This is where biological research and indispensable conservation management of this unique archipelago are carried out. The complex houses interpretation and information centers about the National Park and the Galapagos Marine Reserve. The most memorable part of your visit will probably be the successful breeding center and the enclosures with Galapagos giant tortoises. Afterwards, you will have some free time to stroll around.