Choose from three itineraries ranging from 4 to 8 days for an exploration of the Galapagos Islands aboard the M/C Camila. Enjoy the pristine accommodations of this 5-star vessel as you venture through the world’s greatest natural playground. 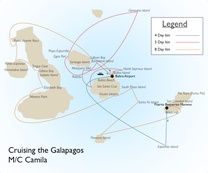 The M/C Camila offers comprehensive Galapagos Islands cruises from 4 to 8 days, which take you to a variety of islands showcasing the amazing wildlife that have made this archipelago famous. Explore the world’s greatest natural playground aboard the M/C Camila.

Departing from Baltra Island, each of the three itineraries offers excellent service and maximum comfort while aboard. The itineraries are as follows:

Cruise to San Cristobal, one of the geographically-oldest islands in the archipelago. Stroll along the powdery white-sand beach of Witch Hill before spotting rare red-footed boobies at Pitt Point. On Espanola, enjoy a birdwatchers’ paradise. See the albatross breeding grounds at Suarez Point before strolling through a landscape home to mockingbirds and blue-footed and Nazca boobies. Close out your time on the island by heading to Gardner Bay to enjoy the beach and spot red and green marine iguanas. Your final stop is Santa Cruz, where you can enjoy a day swimming off of Bachas Beach before returning to Baltra.

Start with a journey to Bartholomew, where you’ll drink in the views of Pinnacle Rock and the lava formations and volcanic peaks that have transformed the island into a moon-like landscape. On Rabida, channel your inner birder as you spot finches, flycatchers, and Galapagos hawks. Then stroll along the island’s dark red sand beach. On Genovesa, continue your birdwatching with sights of swallow-tailed gulls, storm petrels, and frigate birds. Then spot rare red-footed boobies at Darwin Bay before strolling along the steep path of El Barranco for stunning views of the island and surrounding ocean. Head to Mosquerra Islet off of Santa Cruz to share a white-sand beach with sea lions. Continue to Charles Darwin Station on Santa Cruz where you’ll explore a volcanic landscape of lava tunnels and craters and see giant tortoises, among the world’s oldest land animals. Close out your cruise with a trip to North Seymour Island to see male frigate birds show off their magnificent red pouches in one of the Animal Kingdom’s most fascinating mating displays.

Begin with a trip to Santiago where you’ll venture to Sullivan Bay to see its landscape of lava and volcanic rock. Continue your exploration of volcanic activity on Isabela, the largest and most volcanically active of the islands. Cross the volcanic landscape to see giant tortoises and share the waters with humpback whales, stingrays, and turtles in mangrove lagoons. On Fernandina, experience one of the world’s most pristine ecosystems, one that’s entirely free of foreign species. Visit flightless cormorant and Galapagos penguin nesting sites before seeing the Galapagos Hawks of Espinosa Point. Back on Isabela, see the petrified rain of Tagus Cove and the tortoises of Urbina Bay. Close out with a trip to Moreno Point, where you’ll hike through a landscape of black rocks and barren lava flows. On Santa Cruz, visit the Charles Darwin Research Station and see the giant tortoises before hiking to the lava tubes and volcanoes in the highlands. On Santa Fe, venture through a prickly pear cactus grove and see the 5ft-long land iguanas that feast on the cacti. Spot more cacti and yellow and red land iguanas, as well as the islands’ largest sea lion colony, on South Plaza, the smallest island in the archipelago. Venture to Floreana to see Post Office Bay, home to a barrel that’s been used as a post box since the 18th century. You’ll also see the flamingoes and green beaches of Cormorant Point and snorkel alongside rays and sea turtles off Devil’s Crown. Close out your trip on San Cristobal, where Charles Darwin first landed in 1835, and see the giant tortoises before learning about the Galapagos’ fascinating geological history at the Interpretation Center.

Assistance will be provided upon your arrival by an M/C Camila representative after passing through immigration and baggage claim. When ready, you will be transferred to the yacht. You will then be shown to your cabin where you will have some time to settle in before the welcome briefing and lunch.

San Cristobal Island is the fifth largest island in the Galapagos and lies farthest East. It is where Darwin first landed back in 1835 and where the first permanent settlements were founded. Today the main port Puerto Baquerizo Moreno is the capital of the Galapagos province and houses many government offices, the Ecuadorian Navy, and an airport with daily flights to the mainland of Ecuador. Conservation challenges the island faces include invasive plants like blackberry and guayaba and insects like the blackfly.

Lobos Island is an islet about an hour away from San Cristobal. Blue-footed boobies will nest here seasonally. In recent years frigate birds have begun to nest here. Sea lions are abundant, as well as marine iguanas. It is a very calm and tranquil site with beautiful views, including Kicker Rock off in the distance.

Kicker rock or Leon Dormido as it is called in Spanish is a huge structure formed of two eroded volcanic cones that tower over the sea at about 104 meters and sits in the middle of the open water. It is one of the most well-known landmarks in Galapagos with many popular sea birds that surround the area. This is also perhaps one of the best sites in the Galapagos see incredible underwater life.

Pitt Point on San Cristobal is on the easternmost side of the Galapagos Islands. It's also one of the only places that red-footed boobies, blue-footed boobies, and Nazca's can be found all on the same place. The visitor site is very interesting as the formations of old volcanic rock are profoundly unique and the hike to the top of the site provides incredible views of the surrounding area.

Witch Hill is home to a popular beach in the Galapagos with powdery white sand and turquoise waters that are a joy to swim in and snorkel spotting the tropical fish beneath the surface. The occasional sea lion may stop by to swim with you or you'll find them snoozing on the shore. On a panga ride you can explore the many crevices in the eroding rocks, leaving you in awe of the sheer power of erosion.

In Espanola Island lies the southernmost island in the Galapagos, as well as the oldest. It is estimated to be about four million years old. Because it is so far away from the other islands it has the most endemic species. It is a wonderful opportunity for some great photography of endemic bird species that are found only on Espanola and awesome landscapes created by millions of years of erosion.

Suarez Point is a phenomenal site where you will get to see many of Espanola Island's endemic species. The trail will pass by the only Waved Albatross breeding site. If you are lucky you might see a young albatross take off for its first flight for up to five years at sea. Older birds stay at sea for months at a time, only coming back to breed. They have the same mate for life and will meet each other each year, only here to reproduce. Other species that can be seen are marine iguanas that stay brightly colored year round, Galapagos doves, Nazca boobies, blue-footed boobies, swallow-tailed gulls, red-billed tropic birds, and Darwin finches.

Gardner Bay/Osborn Islet - visit one of the best beaches in the Galapagos. The white sandy beach is home to a large colony of friendly and playful sea lions. Three different types of finches can be seen. The Espanola Mockingbird is very friendly, but probably looking for food. At one point in time, tourists must have given it water or food, which taught them bad habits. The site is also where green sea turtles will come to nest their eggs between January and March.

Bachas Beach is located on the north shore of Santa Cruz, and is a great swimming beach. One of the few remnants of the U.S. World War II, a floating pier, presents its self here. You may see flamingos, Sally-Lightfoot crabs, hermit crabs, Black-Necked stilts, and whimbrels. Sea turtles also nest off the beach.

Your cruise has officially come to an end. We hope you enjoyed your Galapagos Cruise! We will now transfer you to your scheduled departure from Baltra Airport to mainland Ecuador. Safe travels!