DELUXE | CRUISE: Explore a magical world of soaring frigate birds, lumbering tortoises, and delightful penguins on this journey to the Galapagos Islands. Travelling aboard a luxurious yacht, you’ll enjoy deluxe accommodations and expert service as you pass between the islands of the Galapagos, exploring this breathtakingly diverse ecosystem. 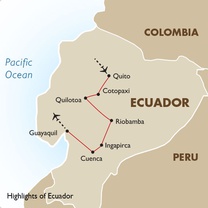 This 8-day Galapagos vacation takes you throughout these biodiverse islands to explore their natural treasures.

Your Ecuador vacation takes you to the Galapagos Islands, the world’s most biodiverse set of islands. The M/Y Endemic will be your base on your journey through the islands. As the Galapagos’ newest catamaran, the M/Y Endemic carries a maximum of 16 passengers and offers large interiors, high-end amenities, and gorgeous social areas. Enjoy air-conditioning in your cabin and experience a service ratio of crew to passengers that is almost one-to-one, which guarantees personalized and attentive service.

Your Galapagos Islands vacation begins on Santa Cruz Island, where you’ll climb Dragon Hill, crossing through a rocky landscape populated by land iguanas on route to a lagoon covered with flamingos. Pass on to Genovesa Island where you’ll stroll along the sandy beach of Darwin Bay and climb the stone staircase of El Barranco, which leads to a plateau of masked boobies and storm petrels. Return to Santa Cruz Island to explore the famous Twin Craters before continuing to Santiago Island, where you’ll pass over the volcanic landscape of Sullivan Bay and see a white-coral sand beach.

On Isabela Island, you’ll explore the lava fields of Sierra Negra Volcano, one of the largest volcanoes in the archipelago. Climb Orchilla Hill to see giant tortoises and marine iguanas and enjoy brilliant views of Puerto Villamil and the nearby volcanoes. You’ll also see the Wall of Tears, a remnant of the Ecuadorian penal colony founded in the 1940s, before heading to Arnaldo Tupiza Breeding Centre to learn about the conservation of giant tortoises. In Elizabeth Bay, ride a zodiac to see the largest colony of penguins in the Galapagos. In Urbina Bay, you’ll see the magnificent coral formations and spot more penguins, land iguanas, and giant tortoises. Head to Tagus Cove to hike up the land to a lookout with gorgeous views of Darwin Bay.

Continue your Galapagos vacation by heading to Fernandina Island and Espinoza Point, where you’ll pass through a landscape of lava cactuses and mangroves growing atop the lava fields. Pass onto Santiago Island where you’ll see the eternal dance between predator and prey at Espumilla Beach, where herons attempt to eat the thousands of crabs that cover the shore. Spend some time in the water seeing the octopuses and moray eels before connecting to Buccaneer Cove to learn about the history of piracy in the islands.

On your final stops, you’ll visit Rabid Island, home to the famous red-sand beach that astounds with its brilliant colours. Head back to Santa Cruz Island for a final exploration of Black Turtle Cove, where you’ll witness how the mangroves have transformed the natural landscape. Then connect back to Baltra for your flight back home.

In the afternoon, visit to Las Bachas, which is a beautiful white-sand beach, located on the northern coast of Santa Cruz Island. There you can go for a stroll or do some easy snorkeling in the gentle surf. Sea turtles lay their eggs at the edge of the vegetation. You can also look for a rusted pontoon, a relic of the Second World War. In fact, "bachas" is a poor pronunciation of "barges," two of which were wrecked offshore at that time: the locals mispronounced the name and it stuck.

In the morning, visit to Darwin Bay, which is the only sandy beach found in the caldera on Genovesa. Colonies of the Great Frigates are found along the beach. Male exhibit their red balloon pouch to females for hope of a match.

Red-footed boobies nest in the trees in contrast to the other two booby species which do so on the ground.

In the afternoon, we will go to El Barranco (Prince Philip's Steps), a carved out of stone stair. This will lead you to a wide plateau, where you can observe large colonies of masked boobies, frigate birds, storm petrels and ducks. During this easy stroll you will cross a small Scalesia forest, habitat of the short-eared owl. The same path will lead you back to your boat.

In the morning, after breakfast, the Twin Craters will be visited. Located in the highlands of Santa Cruz on the road to Baltra airport from Puerto Ayora, these scenic craters are approximately 30 meters deep. These two huge land depressions are surrounded by a Scalesia forest with abundant birds such as the yellow warbler and the Vermilion Flycatcher. Gorgeous views of the leafy green highlands forest are also part of the visit. You will stay in the highlands of Santa Cruz island to see giant tortoises in the wild. These impressive animal gives the name to the archipelago. You can easily appreciate the Galapagos giant tortoises in their natural habitat, eating, walking among others. This is also a good place to see birds such as short-eared owls, Darwin's finches, yellow warblers, Galapagos rails and paint-billed crakes. As part of this experience, you will visit underground lava tubes formed by cooled and solidified lava. Then we will continue our journey to board the M/C Endemic.

In the afternoon, you will visit Sullivan Bay, located on the east coast of Santiago Island. We land on a white coral sand beach and begin our walk over lava that flowed less than 100 years ago. This is the perfect place to see and feel the volcanic origin of Galapagos. Also in this area you will admire flora that grows in lava fields.

Isabela Island is the largest of the archipelago with a surface of 4,588 square kilometers. It encompasses more than the half of the total land area of Galapagos.

In the morning, you will be transported to the Wetlands (Humedales), that are a complex of trails of 6 kilometers long, located south of Isabela Island. They have a wide variety of flora and abundant bird life, including gallinules, finches, stilts and ducks among others.

Or you may visit Sierra Negra Volcano, one of largest craters in the archipelago with a diameter of five kilometers. It offers mesmerizing views with great contrast in colors between lava fields, vegetation and fumaroles.

On the way up to Orchilla hill, giant tortoises and marine iguanas will appear. From the viewpoint the spectacular scenery of the bay, the town of Puerto Villamil, volcanoes, islets and rocks can be appreciated. Isabela wetlands has endemic and introduced species.

After lunch visit the Arnaldo Tupiza Breeding Center of Isabela, infant and juvenile giant tortoises can be seen until they are ready to be released and survive in the wild.

Or you may visit the Wall of Tears. This is a man-made monument which has been built in the 40's by prisoners, since Isabela island was once an Ecuadorian penal colony and building up the wall was part of the punishment.

On the way back to the yacht, be ready to spot flamingos and other water birds.

In the morning, you will discover Elizabeth Bay, which is a marine visitor site. The excursion is carried out in a zodiac and so there is no landing point. Your zodiac ride starts with a visit to the Marielas islets where there is the largest and most important penguin colony in the Galapagos Islands. The excursion continues into the cove that is surrounded by red mangroves where you can spot sea turtles, flightless cormorants, spotted eagle rays, golden rays, brown pelicans and sea lions.

After breakfast, Tagus Cove will be the first attraction to see. A ride along the cliffs in a zodiac will give visitors a good chance to see the Galapagos penguin, the flightless cormorant and other sea birds. From the landing dock it is about a 30-minute hike along the trail up to the top of the cliff from where you can view Darwin Lake, a saline lake saltier than the sea. You can also see several volcanoes from this location.

After lunch, Espinoza point will be visited, which is one of Fernandina's visit points. Located within a fascinating lava scenery with Lava-Cactuses. On the surface of the lava, mangroves thrive. The highlights are sea lions, penguins, the flightless cormorant (especially in spring and summer), and one of the biggest iguana colonies of Galapagos.

In the morning, you will have the opportunity to discover the Buccaneer Cove that is located just north of James Bay. It was known as a safe haven in the 17th and 18th century for pirates to stash their loot, take on fresh water and capture tortoises for food. It is a nice place for a zodiac ride, snorkeling and kayaking. Blue-footed, Nazca boobys, fur seals, and Galapagos hawks can be seen flying overhead.

Or visit to Espumilla Beach will take place. It is a pristine sandy beach and a popular place for marine iguanas and Sally Lightfoot Crabs. The crabs attract the hunting herons, performing the dance of predator and prey. With an abundance of marine life including octopi, moray eel, and shark, snorkeling is recommended and available.

In the afternoon, you will be taken to Rabida Island. Its main attraction is the red sand beach, famous for its cactus groves and rock formation scenery, aside from the vegetation of the arid zone and the presence of native and endemic species. During the walk on the red sand beach you will see brown pelicans' nests, and a lagoon where flamingos are seen from time to time.

In the morning, visit to Mosquera, a small islet found between Baltra and North Seymour Islands. Lava gulls, sea lions, Sally light foot crabs inhabit this sand bank with an extension of over 600 meters. It also hosts the largest populations of sea lions and orca whales that can be seen occasionally depending on the season you visit the islet.

After this last visit, transfer to Baltra airport for your return flight to mainland Ecuador.

Assistance and farewell at the airport.