The Tip Top IV continues the tradition of fine cruising as the latest superior Galapagos yacht in the Wittmer line. She has all of the fine features of her older sister ships, with a few more modern conveniences designed for comfort, privacy, and focus on the incredible Galapagos Islands. 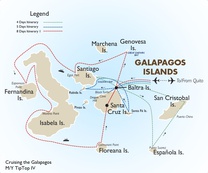 The M/Y Tip Top IV invites you to explore the Galapagos Islands in the finest tradition of eco-friendly cruising. Enjoy amenities including a spacious sundeck, dining room, stocked bar, onboard library, and air conditioning throughout the vessel, along with a private bathroom for each of the 10 cabins onboard. It’s all designed for comfort, allowing you to focus on nature in its ultimate playground, the Galapagos Islands.

Transfer from Baltra’s airport to Charles Darwin Station to learn about conservation efforts in the Galapagos and visit the local town. Then board the M/Y Tip Top and sail on to Punta Suarez on Espanola, breeding site of most of the world’s 12,000 pairs of waved albatrosses. Sea lions also thrive here, particularly at the breeding site at Gardner Bay. On San Cristobal, visit Punta Pitt, known for its olivine beach and awesome volcanic viewpoints. It’s also the only place you can see all three boobie species and both frigate bird species nesting together. Visit Kicker Rock and enjoy some time to snorkel. On your last day, visit the sea lions and pelicans of Mosquera Island, a tiny islet with 600 metres of beach.

Keep a lookout for wildlife in the mangrove forests of Black Turtle Cove before sailing onto the Chinese Hat, a small rocky island alive with penguins, rays, iguanas, and sea lions. Nearby Rabida is a birdwatcher’s delight with dark red sand beaches and another large sea lion colony. Sail to Sullivan, also known as Bartome Island to see the impressive lava formations and volcanic peaks, including Pinnacle Rock. Then go on to Santa Fe, home to the Galapagos’ largest land iguanas and the Opuntia cactus, their favourite food. These also populate South Plaza, your next stop, alongside sea lions, and yellow and red iguanas. Return to Santa Cruz where you’ll have time to see the Flamingo lagoon of Las Bachas Beach before departing.

North Seymour is a tiny island packed with sea lions, watched over by blue footed boobies, frigate birds and more. It’s also a great swimming spot where you’ll begin this Galapagos journey. Then sail to Genovesa, and make landing at Darwin Bay to enjoy this birdwatcher’s paradise. Zip over to Santiago Island and you’ll see the unique four-eyed blenny, marine iguanas, and a massive colony of up to 40,000 fur sea lions, who’ve made a comeback in the Galapagos after being wrongly presumed extinct. Over the next few days, explore Isabela, the largest of the Galapagos Islands, and neighbouring Fernandina. You’ll almost certainly see giant tortoises, stingrays and small sharks in the mangrove lagoons, an ecosystem untouched by foreign species on Fernandina, and in season, perhaps even humpback whales. Sailing into Urbina Bay, you’ll have the chance to admire the corals along the shore, and perhaps swim, snorkel, or kayak. Sail to Floreana, and you’ll find a colourful flamingo lagoon behind white and black mangroves. Equally famous is Post Office Bay, where a barrel once used by 18th century whalers is still known to deliver mail today. Disembark at Santa Cruz Island, with time to visit the native forests and twin craters before your trip to Baltra’s airport.

Flight from mainland Ecuador (Quito or Guayaquil) to Baltra, with AVIANCA Airlines, arriving at 09:20 A.M. approximately. Your guide conducts you to the bus and after a short 5-kilometer ride to the pier; we board the yacht without delay. As the crew weighs anchor, we greet you with our first orientation and we offer a light snack.

In the afternoon, we make a dry landing for a walk along the coast and the interior of North Seymour Island, a low, flat island that was uplifted from the sea by underground seismic activity. We observe blue footed boobies (they nest from May to November), marine iguanas, pelicans, frigate birds, shore birds, sea lions and endemic Palo Santo.

We return to the yacht for a welcome cocktail with the entire crew, and dinner.

Optional: time for those who would like to swim, snorkel or kayak. We come aboard for a delicious lunch.

Later in the afternoon, we make a dry landing on Prince Phillips's Steps (Barranco), we walk and observe the interesting lives of the birds here. Dinner on the Yacht, and then our orientation about conservation efforts made to protect the Islands.

After breakfast, we make a wet landing on James Bay (Puerto Egas), to walk and observe sponges, snails, hermit crabs, a variety of shore birds, barnacles and the endemic four-eyed blenny, marine iguanas and sea lions.

Optional: time for those who would like to swim or snorkel.

We return to the boat for a delicious lunch. In the afternoon, we navigate around Buccaneer Cove (Caleta Bucanero), an area of steep cliffs and dark beaches. The cliffs and pinnacle are used as nesting areas by several species of seabirds. This was a popular place for 17th &amp; 18th century buccaneers to careen their vessels.

Optional: time for those who would like to swim, snorkel or kayak. Dinner and our nightly orientation.

After breakfast, we make a panga ride on Punta Vicente Roca to observe plenty of sea lions, marine iguanas, blue-footed and masked boobies, and flightless cormorants.

We come aboard for a delicious lunch. In the afternoon, we make a dry landing on Punta Espinoza to observe and see a large colony of sea lions, marine iguanas and the flightless cormorants and clumps of lava cactus. Return to the yacht for dinner and our nightly orientation.

After breakfast, we make a panga ride on Tagus Cove, a protected cove between the shoulders of two volcanic craters which protect it from the open sea; we observe penguins, marine iguanas, sea lions and a variety of birds including flightless cormorant and blue footed boobies.

After breakfast, we make a wet landing on Urbina Bay to take a walk and observe a coral area, land iguanas, flightless cormorants and giant tortoises.

Sail to Punta Moreno, again we make a wet landing. We make a walk along shore lagoons located among petrified lava flows where different type of birds can be seeing. On top we have a panoramic view of the famous volcanoes Sierra Negra and Cerro Azul, as well as the highest part of Fernandina Island. Return to the yacht for dinner and our night orientation.

After breakfast, we make a wet landing on Point Cormorant for a short walk to the Flamingos Lagoon of this island. Then we continue the walk until we reach the beach called "La Picona" to see marine turtles and their spawning grounds.

Later, we make a panga ride on Champion Islet, a small island off the Coast of Floreana Island. The principal attraction of Champion Islet is the nearly-extinct Charles (Floreana) Mockingbird. Visitors can also observe bird species such as Swallow-tailed Gulls, Nazca Boobies or Brown Noddies. It is a great place for snorkeling; we will see sea turtles, reef fishes, Galapagos Penguins and white-tipped reef sharks.

Return to the yacht for lunch. In the afternoon we make a wet landing on Post Office Bay, a historic site that recalls the days of the whalers, who presumably placed a wooden barrel in the 18th century to use it as a post office.

Optional: time for those who would like to swim and/or snorkel. Return to the yacht for dinner and our nightly orientation.

After breakfast, we disembark and a bus takes us to the highlands of Santa Cruz Island for a visit to the native forests and twin craters. Then the bus takes us directly to the airport (Baltra). Your guide accompanies you on this ride.