Combine the Yucatan Peninsula’s Mayan civilization’s history and culture with a stay at an outstanding beach resort. Discover the wonders of amazing sites such as Chichen Itza, Uxmal, Ek Balam and Coba, each with its own characteristics. Later unwind and relax in Cancun. 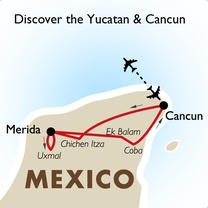 Start your discovery of the Yucatan Peninsula with a night in Cancun and then head to the best known, largest and most restored Mayan archaeological site, Chichen Itza. You will have a tour of the site which will include the impressive buildings of the northern and central archaeological sites, such as the Kukulcan Temple, the Ball Game, the Observatory, the Warrior’s Temple, the Convent of the Nuns and the Sacred Cenote.

Later travel to the city of Merida, the capital of the Yucatan for 2 nights’ accommodation.

Here you will have a tour of the highlights of the city. You will stop at the Zocalo (main plaza), which houses the Cathedral, the Government Palace, the Municipal Palace and the Francisco Montejo House Museum.

Another important site is Uxmal of the classical Mayan period not far from Merida which you will visit. Its buildings are noted for their size and decoration. It is one of the few Mayan cities where the visitor can get a good idea of how the entire ceremonial centre looked in ancient times. Uxmal's main constructions are the Fortune Teller's Pyramid, the Governor's Palace and the Quadrangle of the Nuns. Return later back to Merida.

Leave Merida for Cancun stopping en route at Ek Balam dating from 100 BC to its height at 700-1,200 BC. It is unlike any other Mayan site as it has a feel all of its own. The site is noted for the preservation of the plaster on the tomb of Ukit-Kan-Lek-Tok, a king buried in the largest pyramid. Also stop at Coba, The Mayan ruins here are unique in that only a few of its estimated 6,500 structures have been uncovered, but the ones that have been are impressive. Coba may once have had the largest population of all the Mayan sites. It dates from 600-900 A.D. and there were an estimated 100,000 people living here.

Arrive in the resort of Cancun for a 3 night stay to unwind and relax. Cancun is a very popular resort and Mexico’s showcase resort. It is naturally endowed with turquoise waters and powdery white sandy beaches. Your time here is at leisure to round off a perfect week.

On arrival into Cancun you will be met at the airport and transferred to your hotel. The remainder of the day is free.

Then lunch in a local restaurant. The trip to Merida continues in the afternoon.

Enjoy lunch in a restaurant in Uxmal. Return to Merida for City tour and free afternoon for personal activities.

Departure to Cancun; during the trip, visit to the Ekbalam archaeological site. Ekbalam is a Mayan word that means "Black Jaguar", and this site was built during the years 700 to 1000 AD. Visitors can admire the Plaza Central that stands out thanks to its three ceremonial sculptures; the main pyramid is known as "La Torre" (The Tower) and is comparable in size to the outstanding Mayan constructions of the southeast Yucatan. After the visit the tour continues to Coba.

Enjoy lunch in a local restaurant. In the afternoon visit of the archeological site of Coba, which was not discovered and consequently not predated by the Spanish. The site hosts the tallest Mayan pyramids of Mexico: the "Nohoch Mul". After that, departure towards Cancun, where the tour will arrive after approximately 2 hours. On arrival in Cancun you will be transferred to your chosen hotel.

After Breakfast you are transferred to Cancun International Airport for your onward travels.