Enjoy the famous Mayan sites and beach resorts of the Yucatan Peninsula. Gaze upon Kukulcan Pyramid at Chichen Itza, one of the New Seven Wonders of the World, sample Yucatecan cuisine in colonial Merida and relax on the pristine beaches of chic Playa del Carmen. 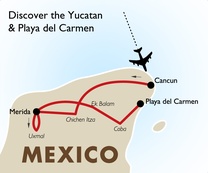 This 7-day small group tour combines the rich history of the Mayans with the world-famous relaxation of Playa del Carmen.

Your tour begins in the resort city of Cancun, on the Yucatan Peninsula in Mexico. Cancun is one of the most popular tropical getaways in the world, known for its bustling resort infrastructure and sparkling white-sand beaches. West of Cancun is Chichen Itza, one of the best Mayan archaeological sites in Latin America. Most famous for its massive Kukulcan pyramid, Chichen Itza served as the Mayan capital from the fifth to the tenth century. It was one of the largest cities in the Americas prior to European contact and enjoys a robust afterlife as a UNESCO World Heritage Site and one of the New Seven Wonders of the World. You can tour the temples and see the spectacular lightshow that replicates a serpent descending the pyramid stairs.

Heading further west you’ll reach Merida, the cultural capital of the Yucatan that boasts gorgeous colonial architecture and charming city streets. Merida acts as a counterpoint to the rest of the peninsula, offering a taste of what the Yucatan was after European expansion but before resort culture took over. In the Zocalo, you can see the city’s architectural highlights, from the government palace to the sixteenth century mansion, Casa de Montejo. While in Merida, be sure to sample unique Yucatecan food like salbutes and panuchos or Mayan papadzules, which are remarkably different than typical Mexican dishes.

From Merida you’ll access the fascinating archaeological sites that dot the peninsula. Visit the five-story Pyramid of the Magician in hilly Uxmal. See the tomb of the king, Ukit Kan Lek Tok, buried at Ek Balam. Feel like Indiana Jones as you venture deep into the jungle to Coba, which was first settled over two thousand years ago and avoided Spanish discovery. The ruins have barely been excavated and the pyramid Nohoch Mul is the tallest on the peninsula. Climb it to get a spectacular view of the surrounding region.

After exploring the Mayan ruins of the peninsula, head to Playa del Carmen on the peninsula’s east coast and enjoy one of the world’s premier resort cities. Take a shopping excursion on Quinta Avenida. Snorkel in the reefs and see rays, moray eels and sea turtles. Relax on the white-sand beaches and soak in the rays and the Euro-chic vibe. At the end of your stay, you’ll truly understand why the Yucatan peninsula is famous the world over.

On arrival into Cancun you will be met at the airport and transferred to your hotel. The remainder of the day is free.

Then lunch in a local restaurant. The trip to Merida continues in the afternoon.

Enjoy lunch in a restaurant in Uxmal. At noon, return to Merida for City tour and free afternoon for personal activities.

Departure to Playa del Carmen; during the trip, visit to the Ekbalam archaeological site. Ekbalam is a Mayan word that means "Black Jaguar", and this site was built during the years 700 to 1000 AD. Visitors can admire the Plaza Central that stands out thanks to its three ceremonial sculptures; the main pyramid is known as "La Torre" (The Tower) and is comparable in size to the outstanding Mayan constructions of the southeast Yucatan. After the visit the tour continues to Coba.

Enjoy lunch in a local restaurant. In the afternoon visit of the archeological site of Coba, which was not discovered and consequently not predated by the Spanish. The site hosts the tallest Mayan pyramids of Mexico: the "Nohoch Mul". After that, departure towards Playa del Carmen, where the tour will arrive after approximately 2 hours. On arrival, you will be transferred to the hotel.

After Breakfast you are transferred to Cancun International Airport for your onward travels.