Let the remnants of the Mayan empire intrigue you on this short Yucatan Peninsula tour, which takes in the famous sights of Chichen Itza, Uxmal, Ekbalam, and Coba, before returning you to the sundrenched shores of Cancun. 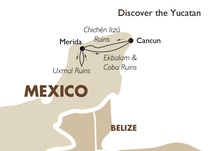 This 3-day stay on the Yucatan is all about the fascinating ruins of the Maya.

Set out from Cancun bound for the Chichen Itza archaeological site. This was the Mayan capital of Yucatan between the 5th and 10th centuries, and is now one the most famous Mayan sites. You’ll tour the Kukulcan Temple, the Observatory, the Convent of the Nuns and other important structures, before going on to Merida, your base for the next two nights. Spend the afternoon exploring gorgeous colonial architecture, including its main cathedral and government buildings.

Your Mayan adventure continues at Uxmal, highlighted by the famous Pyramid of the Magician. With design more typical of the Mayan period, this was a dominant city in the region for much of the late 9th and early 10th centuries, though it dates back to about 500AD. That long history offers some explanation for its name, which means ‘built in three stages.’ Return to Merida in the afternoon.

On your final day, you’ll explore Ekbalam, a city whose name means ‘Black Jaguar.’ Its central pyramid, La Torre, is thought by many to compare with the famous Tikal pyramid, and all the structures date back to between 700 and 1000AD. The last archaeological site on your itinerary is Coba, which actually contains the tallest Mayan pyramids in Mexico, the Nohoch Mul. Your final destination is Cancun, where you can depart, or transfer to your chosen hotel for a few days in the sun.

Then lunch in a local restaurant. The trip to Merida continues in the afternoon, followed by a panoramic visit to the city known as the "White City", which has Colonial houses as well as houses that date back to the beginning of the century in the Arabic, French and Italian styles. Those houses have witnessed all the old wealth that was generated thanks to the sisal culture.

You will stop at Merida's Zocalo, where visitors can admire the city's main monuments, such as the Cathedral, the Government's Palace, the Municipal Palace and the Francisco Montejo's House.

Enjoy lunch in restaurant Hacienda Ochill. Return to Merida in the afternoon.

Departure to Cancun; during the trip, visit to the Ekbalam archaeological site. Ekbalam is a Mayan word that means "Black Jaguar", and this site was built during the years 700 to 1000 AD. Visitors can admire the Plaza Central that stands out thanks to its three ceremonial sculptures; the main pyramid is known as "La Torre" (The Tower) and is comparable in size to the outstanding Mayan constructions of the southeast Yucatan. After the visit the tour continues to Coba.

Enjoy lunch in restaurant Selva Maya with some time for a refreshing wim in its Cenote. In the afternoon visit of the archaeological site of Coba, which was not discovered and consequently not predated by the Spanish. The site hosts the tallest Mayan pyramids of Mexico: the "Nohoch Mul". After that, departure towards Cancun, where the tour will arrive after approximately 2 hours. On arrival in Cancun you will be transferred to your chosen hotel. (Not included in the trip price)