One of the world’s most mysterious islands is one of its most intriguing destinations. 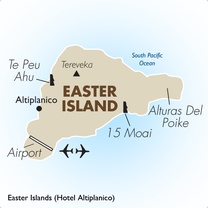 Spend 3, 4 or 5 days on Easter Island, a destination every traveller has heard about, but few really understand. After a traditional Polynesian welcome, spend the next day following the eerie gazes of the Moai. These mysterious ‘heads’ have made the Island famous worldwide. What was their purpose? Why do they all face inland? What happened to their original creators? You may leave with these answers, or simply more questions. Either way, this is a trip you’ll be talking about for years.

On your arrival in to the Mataveri airport, from the mainland, you will be met with the traditional reception of a flower necklace and welcome drink made from fruits from the island - remember this is a Polynesian Island! After the warm welcome, you will be transferred to your hotel.

Please note this day is a full day of travel.

Easter Island is one of the most isolated islands in the world but 1200 years ago a double-hulled canoe filled with seafarers from a distant culture landed upon its shores. Over the centuries that followed a remarkable society developed in isolation on the island. For reasons still unknown, they began carving giant statues out of volcanic rock. These monuments, known as "moai", are some of the most incredible ancient relics ever discovered.

Experience the beauty, mystery and dramatic scenery of Easter Island in this full-day tour to Anakena, a white sand beach said to have been the landing point of Polynesian chief Hotu Matu'a who first settled the island. The tour starts in Hanga Roa, from where we will explore the Southeastern and Northeastern coasts of the island, visiting the temples of Ahu, Akahanga and Tongariki.

Against an ocean backdrop, discover the original ceremonial site of Ahu Akahanga and ponder over its toppled moai. Then view restored statues at Ahu Tongariki, before exploring the volcanic slopes and quarry of Rano Raraku, where most moai originated and can be found. After a box lunch, finish the day by relaxing on the white sand beach of Anakena.

Today after breakfast you have a chance for some last minute shopping before being transferred to the airport for your return flight back to Santiago.