Added on to a South America vacation or taken on its own, a visit to Antarctica is an unforgettable adventure. Few Antarctic trips however let you stay on land, making this short excursion a truly unique experience. 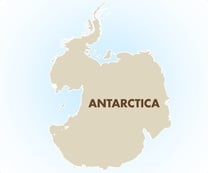 This 5-day Antarctica trip offers all that’s unique and beautiful about the frozen continent, with one special difference. You’ll overnight at Frei Base Research Station, coming away with serious bragging rights as well as amazing memories. Fly from Punta Arenas, Chile, to King George Island. Then spend the day enjoying the glaciers, wildlife, and other sights found in this astonishing part of the world. Keep a look out for whales, seals and sea lions, and a variety of penguins. You’ll also visit the Presidente Frei Meteorological Center, and several other research stations to learn more about the work being done here.

Today is spent in a pre-trip briefing where you learn of the safety procedures, protection of the local environment during your stay as well as an introduction to your fellow explorers. Join some of your fellow travellers tonight for dinner in this remote but beautiful city.

Assuming weather allows flying, you cross the Magellan Straight and Tierra del Fuego, the many glaciers dotting the Andes before passing over Cape Horn and the furthest point south in the world.

The first explorer on King George Island in 1819 was the British sailor William Smith. Unlike Smith, Scott, Palmer, Shackleton and other earlier and now modern day explorers, who had and do face the roughness of the Drake sea for several days, you will arrive at the Antarctic airport of Frei Base at King George Island after a pleasant three and a half hours flight.

After arrival, you will visit the establishments of Villa Las Estrellas, as well as witness the wild fauna, glaciers and other attractions dotted nearby. Baleen whales, Orcas or Killer Whales, Sea Lions, Weddell Seals, Antarctic Seals and Penguins make up the fauna all of which feeds on the Antarctic's rich waters. The famous Adelie penguins are abundant but you will also be able to see the Papua Penguins, Antarctic Penguins amongst others.

Frei Base was established in 1980 under the name of Teniente Rodolfo Marsh, along with Presidente Frei Meteorological Center, inaugurated in 1969. It is one of the main meteorological and navigational stations in the Antarctic and we spend time visiting the centre.

Return by air back to Punta Arenas where you are transferred to your hotel.

If you were able to visit Antarctica the day before, today you are free to depart or spend more time in Punta Arenas. There is no refund for unused hotel nights.

If were unable to fly to Antarctica yesterday, another attempt will be made today. If you cannot fly due to weather today your day is free to explore Punta Arenas. Optional tours available and payable locally.

If you were able to visit Antarctica the day before, today you are free to depart or spend more time in Punta Arenas. There is no refund for unused hotel nights.

If were unable to fly to Antarctica yesterday, another attempt will be made today. If you cannot fly due to weather today your day is free to explore Punta Arenas. Optional tours available and payable locally.

If you were able to visit Antarctica the day before, today you depart Punta Arenas.

You are transferred to the airport for your onward travels.

Arrival into Punta Arenas on day 1 of the trip is required to be no later than 500PM. Both programs are weather dependent and may change or be cancelled if conditions dictate. Hotel in Punta Arenas is the Cabo de Hornos Hotel or similar.

Prices are "from" per person based on twin/double share accommodation and for travel in low season. Seasonal surcharges and blackout dates may apply. Limited seat/spaces and all pricing is subject to change and availability. Rates for single or triple travellers are available on request - please inquire. Subject to availability and weather conditions