Escape on the ultimate family getaway to a luxury safari camp in the Galapagos Islands. Staying at the Galapagos Tented Safari Camp, you and your family will explore the archipelago, cross volcanic landscapes, and spot exciting and beloved animal species like Galapagos penguins, blue-footed boobies, and Giant Tortoises. 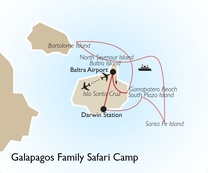 This 6-day Galapagos vacation takes you to a luxury safari tented camp on Santa Cruz Island to spend a few days exploring the archipelago. It features deluxe accommodations, small group tours, and is a great way for families to see the Galapagos Islands.

After arriving at the airport on Baltra, you’ll connect to Santa Cruz Island to traverse a landscape of craters and lava tunnels on route to the Tortoise Reserve where your kids can get their first glimpse of the Galapagos’ most famous inhabitant, the Giant Tortoise. Afterwards, you’ll connect to Galapagos Safari Tented Camp, a 5-star camp set on a 55ha farm on Santa Cruz Island. Only 30 minutes from the sea, the camp’s nine tents offer the best in privacy and comfort as well as breathtaking views of the ocean and the farm’s abundant wildlife.

You’ll spend four full days in the Galapagos, using Galapagos Safari Tented Camp as your base. On your first day, head across Santa Cruz Island to explore the Cerro Mesa Reserve, enjoying views of the island’s largest crater before crossing a landscape of black lava to reach Garrapatero Beach to take advantage of its turquoise waters and see the flamingos in the lagoon. The next day, head to Bartolome to walk along the boardwalk, spot Pinaccle Rock rising above the sea, and explore Sullivan Bay and see its many Galapagos Penguins and sea lions. On Santa Fe Island, you’ll venture across the ancient volcanic landscape to see the inky-black land iguanas and spot the comically-looking blue-footed boobies, which your kids will adore.

On North Seymour Island, hike through boobie nests, spot land iguanas, and marvel at the massive red pouches of male frigate birds. You’ll then ride a dinghy to Mosquera Islet, spotting a sea lion colony. Afterwards, venture to South Plaza Island to snorkel off Punta Carrion and share the water with rays and reef sharks. Another day, join local fishermen on a fishing excursion through the waters of the archipelago, retiring to a pristine desert beach at day’s end, where you and your kids can suntan and snorkel. On your final day, head to the Charles Darwin Research Station, where your kids can get up close to the Giant Tortoises. Afterwards, explore Puerto Ayora before riding a speedboat to Tortuga Bay to spend your final sunset on the beach.

At the end of your stay, connect back to the airport to continue your onward journey.

Galapagos Islands - In search of the giant tortoise

Welcome to the Galapagos! An English-speaking naturalist guide meets you at the VIP lounge at Baltra Airport to escort you on your excursion of the highlands of Santa Cruz Island. Enjoy a delicious, locally-sourced lunch at a farm in the western hills. Take in the area's natural beauty, pit craters, lava tunnels, and learn more about the Scalesia and Guayabillo forests. At the Tortoise Reserve, share some time in the giant tortoises' natural habitat, surrounded by the abundant bird life of the area. End this day at Galapagos Safari Camp with a sunset cocktail followed by dinner.

After breakfast, visit a neighboring organic coffee plantation to learn about responsible small-scale farming in the Galapagos, and the children have a chance to pick coffee beans if season allows. Then drive to the enormous Cerro Mesa crater for a short walk in the wetlands that is home to a wonderful variety of birds and the occasional bathing tortoise. After lunch at a local restaurant, jump on bikes for a downhill ride to Garrapatero Beach, where the contrast of mangroves, black lava, white sand, and turquoise water, along with its birdlife and flamingo lagoon, is magnificent. Explore the bay in sea kayaks, accompanied by marine iguanas, blue-footed boobies, and countless shorebirds. In the evening, back at the camp, parents can relax while the children take a private art class with a local artist.

Early morning finds you on a motor vessel heading to one of the neighboring islands: North Seymour, Bartolome, Plazas and Santa Fe. Each island is an endemic treasure to explore and enjoy. The Galapagos Marine Reserve is the second largest marine reserve in the world, and snorkeling off the boat is highly recommended. Destinations will be given advised based on weather conditions and wildlife activity closer to the departure date.

Bartolome
Your day starts with a hike up a 600-meter wooden boardwalk and stairway across ancient red, black and orange lava fields to the highest point on the island. The panoramic view from the lookout surveys the iconic Pinnacle Rock in the foreground, Sullivan Bay in the distance, and Daphne Major and Minor on the horizon. Following the hike, enjoy a dinghy ride around the coastline, looking for Galapagos penguins and hawks resting on the cliffs. In the afternoon, explore the shore, where sea lions, Sally Light-Foot crabs, and marine iguanas greet us on the beach. This is a great place to snorkel, discovering the colorful underwater world of the islands amongst playful Galapagos sea lions, penguins, reef sharks and rays.

Santa Fe
This island is among the oldest in the archipelago, with underwater lava formations dating back 3.9 million years. Its visitor trails are bursting with animal activity. Santa Fe is home to a healthy population of terrestrial iguanas including the Santa Fe yellow iguana, as well as the inky-black marine iguanas. Other residents include Galapagos hawks and blue-footed boobies. Friendly sea lions line the shores and swim besides you when snorkeling, while marine iguanas bask in the sunshine on shoreline rocks, or dart quickly past under the waves. We can also hope to observe sharks, rays, and colorful schools of fish.

North Seymour
This island, brimming with life across its rocky surface, hosts blue-footed booby and frigate mating colonies. Land iguanas also frequent the area, seen along the 2-mile trail that loops around the southern section of the island. As we begin our walk, we come across nests of comic-looking blue-footed boobies. Galapagos mockingbirds and yellow warblers are often spotted. As we draw near to the frigate colony, the remarkable birds seem to be nesting in every surrounding tree. Males inflate their red, basketball-sized pouches to attract mates. Back in our dinghy, we head to Mosquera islet, in the channel between Baltra and North Seymour. Here you can find a large sea lion colony, full of pups, bulls and females of different ages.

South Plaza
While en-route to Plaza, we stop at Punta Carrion. The shallow waters of the sheltered cove make a fun place to snorkel with schools of fish, rays and, if we are lucky, reef sharks. The dock at South Plaza is usually overrun with sea lions, but we can maneuver around them to start walking along the trail that winds its way past yellow land iguanas resting in the shade of groves of prickly pear cactus trees. The landscape is vibrant, the black lava outcrops and ground carpeted with the reds and yellows of sesuvium cactus. At the island's southern cliff edge, we can observe all sorts of birds swirling in the currents, including dazzling red-billed tropic birds. Following the trail round to the west, we come to a busy sea lion colony. South Plaza's other residents include land and marine iguanas, Nazca and blue-footed boobies and swallow-tailed gulls and other species of birds. Return to your tented camp late in the day.

An excursion with local fishermen is a favorite among children. This excursion is both a wildlife experience and a cultural exchange opportunity. The camp is involved in a program with the National Park Service that aims to engage local fisherman in tourism activities as an alternative means of income, with the added benefit of protecting local fisheries from depletion. The fishermen have very safe and modern speedboats, which we charter privately for the day. With your guide acting as translator, the fishermen share anecdotes from a lifetime at sea, and the children learn local fishing tricks. After fishing, you'll land on a deserted beach and may snorkel in a spot known only to locals. If you prefer to limit fishing and enhance the snorkeling or beach experience, your guide is there to adapt the day to your preferences. Return to your tented camp late in the day.

Visit the famous Charles Darwin Research Station to learn about its preservation efforts and scientific research. The children will have an up-close experience with the tortoises that are the islands' namesake. Parents can enjoy free time to wander around Puerto Ayora, while your guide takes the children to a local playground or on a tour of the local fish market on the waterfront. After lunch, take a speedboat to Tortuga Bay, a white sandy beach with basking marine iguanas, and shallow turquoise waters teeming with white-tip reef sharks and fish. Or you can join a snorkeling boat that will take you to frolic with sea lions. Return to your tented camp late in the day.

Enjoy the serenity that Galapagos Safari Camp has to offer. Relax, walk, or enjoy the sunrise from the observatory before departure to your next destination. (Here's where you'll wish you had extended your journey!).