Haciendas of the Yucatan

DELUXE | PRIVATE-GUIDED: Spend time in the Yucatan Peninsula to explore outstanding Mayan archaeological sites and get a glimpse of how this civilization lived. Of particular note are Uxmal and Chichen Itza, which you'll discover alongside a knowledgeable private guide. Along the way, relax in a range of top-notch haciendas. 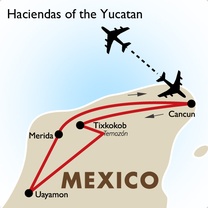 The Yucatan Peninsula contains the most popular beach resort of Cancun, a fairly recently man-made resort dating back to 1970 before which it did not exist as such and is Mexico’s showcase resort. It is naturally endowed with turquoise waters and powdery white sandy beaches. It is here you start tour with an overnight’s accommodation.

The Yucatan is home to many excellent archaeological sites of the Mayan civilization. Your first introduction is at Tixkokob to visit the Ekbalam archaeological site built between 700 and 1000 AD and includes the three ceremonial sculptures and the main pyramid known as La Torre (The Tower). Later visit the city of Valladolid, the second largest city in the Yucatan. Continue to your overnight hacienda stay in Chichen.

The next day visit the ancient archaeological site of Dzibilchaltun founded in 600 BC and famous for its old temple and its once astronomical importance. Then head to Temozon where you will stay in a hacienda for 2 nights with a day at leisure to enjoy your accommodation.

Depart from Temozon and travel to the Uxmal, an important Mayan site. Its buildings are noted for their size and decoration. Thanks to its good state of preservation, it is one of the few Mayan cities where the visitor can get a good idea of how the entire ceremonial centre looked in ancient times. Then it’s on to Uayamon for overnight.

This is followed by an early morning visit to Edzna, a Mayan city which traded mainly with Tikal by whom it was architecturally influenced. Then continue to Campeche, a city founded in 1540 and the oldest city in Yucatan Peninsula. The city centre has some beautifully preserved colonial buildings painted in pastel colours. Then it’s on to Mérida, a city of contrasts. You will find elegant hotels, restaurants and malls plus a large central market and numerous small shops all around the main plaza. Merida has a rich cultural life which also reflects its diversity. Here you can admire monuments such as the Cathedral, the Government Palace, the Municipal Palace and the Francisco Montejo's house. Overnight in Merida.

On your last day visit one of the most impressive archaeological sites not only in Mexico but in the world. Chichen Itza is the largest and most restored site and also the most visited. The Pyramid of Kukulcan or El Castillo is the most famous landmark of Chichen Itza. It was the Mayan capital of Yucatan and flourished between the 5th and 10th centuries AD. Admire the impressive buildings of the northern and central archaeological sites, such as the Kukulcán Temple, the Ball Game, the Observatory, the Warrior's Temple, the Convent of the Nuns and the Sacred Cenote. Later return to Cancun where your tour ends.

On arrival at Cancun's International airport you will be met and transferred to the hotel. The remainder of the day is at leisure.

Departure to Tixkokob; during the journey, visit to Ekbalam archaeological site. Ekbalam is a Mayan word that means "Black Jaguar" and this and this site was built during the years 700 to 1000 AD. Visitors can admire the Plaza Central that stands out thanks to its three ceremonial sculptures; the main pyramid is known as "La Torre" (The Tower) and is comparable in size to the outstanding Mayan constructions of the southeast Yucatan. Our day continue with a brief visit of the city of Valladolid, the Yucatan's second biggest city founded in 1543 by Francisco Montejo and received its name after its homonym city in Spain. Arrival at Hacienda San Jose Cholul and accommodation in Superior room.

This Hacienda was built in the XVII century and originally was used to raise cattle.

Leaving to visit the archaeological site of Dzibilchaltun. This ancient city was founded around 600 B.C. "El Templo de las Siete Munecas" is certainly the most impressive construction of the area, not only for this architecture, but also for its astronomical importance: every equinox it can be observed how the sun crosses through its east door. After that, departure towards Temozon. Arrival and accommodation in Superior room at Hacienda Temozon.

Hacienda Temozon lived its best times during the XIX century when it became one of the main producers of sisal fibers worldwide.

Day at leisure to enjoy this charming hacienda. Otherwise it is possible to propose an optional full day tour to "The convents route" or "The Ria Celestun".

Departure in the morning to visit the Uxmal archaeological site. Uxmal is a very interesting place due to its delicate architecture and its fine masonry. You will appreciate here the "Fortune teller's temple", the highly decorated "Nun's Quadrangle", the "Ball court", the "House of the tortoises" and "The Governor's palace". Uxmal comes from the Mayan "Och Mal" that means "Three constructions".

Afterwards the tour continues to Uayamon. Arrival and accommodation in Junior Suite at Hacienda Uayamon.After the XVI century, this hacienda suffered continuous attacks from the English corsairs. It was sold several times until the 19th century when it became one of the most important haciendas of the Campeche area.

Early in the morning, visit of Edzna. This Mayan city traded mainly with Tikal by whom it was architecturally influenced. At the end of the Classic Period, Edzna lost importance and was abandoned by its ruling class. The journey continues to Campeche. This city was founded in 1540 (the oldest city in Yucatan peninsula). The city centre has preserved some beautiful colonial buildings, painted in pastel colors. After that, we continue to Merida the "White City", Merida where visitors can admire the city's main monuments as: the Cathedral, the Government's Palace, the Municipal Palace and the Francisco Montejo's house. Arrival and accommodation in Deluxe room at Presidente Villa Mercedes Merida.

Leaving towards the Chichen Itza's archaeological site. Chichen Itza was the Mayan capital of Yucatan and flourished between the 5th and 10th centuries AD. Visitors can admire the impressive buildings of the northern and central archaeological sites, such as the Kukulcan Temple, the Ball Game, the Observatory, the Warrior's Temple, the Convent of the Nuns and the Sacred Cenote.

The trip to Cancun's international airport or Riviera Maya's hotel continues in the afternoon. End of services.

Low Season prices apply for arrivals from 23rd April to 10th December. Prices for Dec 11tht to Jan 3rd are on request.