DELUXE | PRIVATE-GUIDED: The UNESCO-listed city center of Quito is worth enjoying to its fullest. Described as the least altered and best preserved in Latin America, immerse yourself in this historically rich barrio with a stay at Casa Gangotena - an impeccable, colonial-style hotel with lovely terrace views. 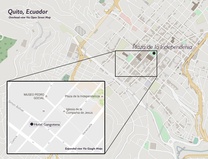 The elegant air-conditioned rooms at this property come with a flat-screen TV, a small seating area and a private bathroom with a spa bath. Some boast views of the city.

International and regional cuisine is served at the on-site restaurant, and guests can find other dining options within just 500 metres of the hotel.

Plaza Independencia Square is a 5-minute walk away, and Casa del Albado Museum is situated just 200 metres away.

Ecuador is history, fascinating indigenous cultures, slow winding rivers and lush tropical forests, spectacular snow capped volcanoes and some of the most exciting wildlife on earth.

The place to start is the 'Mitad del Mundo'; a site located just 30 minutes north of Quito, where a monument marks the equator at its closest point to the city. Archaeological evidence shows that both pre-Inca and Inca civilizations recognized and celebrated the equinox, the day the sun is directly over the equator.

In the morning we will make a 45 minute journey northwest to the equatorial line, where we will walk the rim of the extinct Pululahua volcanic crater. Later we will visit the "Ciudad Mitad del Mundo" a group of buildings designed to explain the significance of the site, as well as the Ethnographic or Intiñan Museum, located right on the Equator. Here you will have the chance to plant your feet in two hemispheres at the same time.

Back in Quito, after lunch we will visit the city's impressive colonial center, the reason Quito was the first city to be named a world heritage site by the United Nations. First on the agenda is a walk through the main plaza, the 'Plaza de la Independencia', where you will see the Government Palace, the Cathedral, and some of the most important churches built around the XVI and XVII centuries, including the San Francisco Monastery, a building begun only 5 days after the founding of the city.

We will have the chance to enjoy a chocolate experience, which starts with a guided tour explaining the history of cocoa in Ecuador, followed by a chocolate tasting.

Ecuador's unique equatorial climate provides the perfect environment for growing the world's finest cocoa - Cacao Arriba. Cocoa has been revered in Latin America for over 5,000 years. Spanish explorers loved it so much they called it the 'Food of the Gods'.

The Republica del Cacao's founders began their voyage over ten years ago when they set themselves an ambitious mission: to produce the most authentic and delicious chocolate, while protecting and developing sustainable fine cocoa production.