World famous for Incan Ruins and ancient cultures, a Peru vacation can also be a showcase for a range of luxury and culinary experiences. 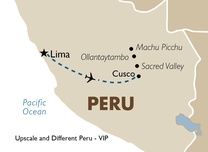 This is a mistake as Peru is home to some of the most luxurious and well-appointed hotels anywhere in the world and over the past 2 years the country has been the winner of world travel awards for its culinary offerings. In short – with its rich cultural history, world famous ruins and world class services and accommodation Peru is the perfect VIP luxury getaway.

Goway’s VIP Peruvian experience sees you at the famous Machu Picchu where you experience a private tour of the ruins and stay at the equally famous Belmond Hotel (formerly Orient Express) Sanctuary Lodge. Visit local markets in your air conditioned private transport to shop till you drop and dine in some of the country’s most famous restaurants as you savour all of Peru’s offerings. Backed by a 24/7 personal concierge service this is your best choice for a VIP experience to Peru.

On your arrival into Lima you will be met and transferred to your hotel – the Belmond Miraflores Park Hotel.

The Miraflores Park Hotel in Lima is located in the Malecon de la Reserva in an exclusive residential area. The hotel provides easy access for all that's best about Lima and is renowned for its beautiful setting with breathtaking views of the Pacific Ocean.

Luxuriously appointed hotel suites combined with personalized service and state-of-the-art business facilities provide hotel guests with the perfect 'home from home' environment by which to explore and enjoy Lima.

Peru's capital Lima is one of the most interesting cities in South America, with potent mix of colonial architecture, superb museums, Inca gold and antiquities, and glamorous shops, bars and restaurants all just moments from the hotel.

As most flights arrive late in the evening – even early morning, your Lima City tour for today will commence mid morning.

After refreshing up from your flight you begin an private tour around Lima with access to some of the most private of residences in Lima.

You will visit the tourist district of Miraflores, and see the Pacific Ocean from the Love Park.

The tour continues with the modern suburb of San Isidro and a visit to the pre-Inca pyramid of Huaca Huallamarca. Then, you will visit the Historical Center: Plaza Mayor ("Main Square"), the Government Palace, the Archbishop's Palace, the City Hall and old streets with colonial mansions and Moorish balconies.

The visit also includes Santo Domingo Convent, an icon of colonial architecture, which was completed in the late stages of the sixteenth century and has been restored recently. It has an ancient crypt where the relics of Peruvian saints such as Saint Rose of Lima and San Martin de Porres lie.

Later on, you will tour the Archbishop’s Palace, a beautiful building with thirty rooms, in which 16th-19th century art works, genuine heritage of the Catholic Church, are on display.

Watch the changing of the guard at the Government Palace from one of the wood carved Neo-classical balconies on the building’s façade.

Finally, you will visit the Cathedral, the stage upon which the most important events in the lives of Lima residents used to take place and the oldest building in the capital.

After this exhilarating day of discovery you then will enjoy a memorable dinner on and over the sea at one of Lima’s most popular restaurants – Rosa Nautica.

Peru has won numerous awards for its high calibre of food – in fact Peru has won, 2 years in a row, the World Travel Award for SOUTH AMERICA'S LEADING CULINARY DESTINATION
2012 & 2013.

Today you will sample the fine food Peru has on offer.

Visit one of Lima’s symbolic markets to see the amazing variety of fish, fruit, and vegetables used in Peruvian food. You will be equipped with a list of names and descriptions of foods you will encounter to help you enjoy this visit even more.

Afterwards, you will watch as the chefs from “LIMA 27” restaurant demonstrate how to prepare Peru’s main dishes and learn how to make an exquisite Ceviche or famous Lomo Saltado (sautéed tenderloin strips and French fries). Rounding out this culinary experience is a delicious lunch.

After relaxing at your hotel you then venture out to another of Peru’s finest restaurants – Astrid Gaston.

An early rise and a transfer to the airport for your 40 minute flight up and over the Andes.

On arrival in to Cusco you are met and transferred to your hotel – JW Marriott – where the rest of the day is free to relax and begin acclimatization.

Your guide will meet you at a pre-set time and take you dinner at one of the following restaurants: Ciccioliona or Limo

The hotel has a charming Colonial courtyard with a sculpted stone arch, an on-site massage room and a souvenir gift shop. There is Wi-Fi access for a fee.

Rooms are elegantly styled with parquet floors, upholstered chairs and dark wood fittings. They have cable TV, minibars and private bathrooms with showers.

Guests can taste Peruvian specialties or international cuisine at the 2 on-site restaurants, in a stylish setting.

Cusco’s picturesque main square is 5 blocks from the hotel.

Get to know intimately, the imperial city and original Incan capital city of Cusco, its history and culture, through a guided walking tour.

Start the tour at Koricancha, an old Incan palace, then continue to the Main Square on which sits the cathedral, the exquisite Church of the La Compañía de Jesús, and other colonial buildings. The tour continues to Sacsayhuaman Fortress, an impressive example of Incan military architecture that overlooks the city.

Finally, to end the tour, you will enjoy a sparkling glass of wine overlooking the UNESCO World Heritage site of Cusco.

Tonight is free to dine and or relax at your own pace.

Enjoy an early breakfast before heading into the Sacred Valley of the Incas.

The day’s first visit is in the small town Pisaq, in the Urubamba Valley, where one of the region’s most famous markets is. Artisans sell their wares wrought in alpaca wool, silver, and ceramic, as well as other products from around the region. The experience is one of a mixture of color and tradition.

Afterwards, you set off for Chinchero, a charming valley town, and there you will attend a seminar to witness how the townsfolk spin and weave using traditional Andean techniques that they have preserved over the millenea. You can also try your hand at what you have seen, making your very own cloth to take home with you.

Last destination of the day is Ollantaytambo, a distinctive town on account of its architectural design, typically Incan, with narrow streets and canals that bring fresh water. There is an incredible archeological site, as well, with terraced slopes and finely worked stone walls that show the Incas’ advanced masonry skills.

Lunch is included at Sol y Luna Wayra Restaurant, where you will enjoy the local food served on a terrace, as you enjoy the Paso fino horse show.

Dinner is at your leisure.

Today you visit the community of Mullaka’s Misminay, to discover the traditional Andean lifestyle.

Share with the local people the ancestral knowledge of this community by taking part in one of their daily activities: weaving seminar, agricultural or ethnobotany session.

During the Weaving Seminar, the hostess will teach you the techniques used since many centuries ago by their ancestors. They are still using some traditional old tools as the “Telar” made of wood, and for coloring they use natural tints that come from roots and typical plants. In the agricultural session, you will also have the chance to learn about ancient techniques, the tools used by the Incas, which are the same they still use daily. You will know about the different products that come from their fields and which they produce.

The Ethnobotany session will show you the local herbs that can used to assist with healing. You will learn how to chop them and the proportions that are used for medicinal purposes.

Finally, discover more Peruvian gastronomy of the local bent and enjoy a delicious brunch made by the locals with their locally grown products.

Today board the famous and luxurious Hiram Bingham Train for the ride through the Sacred Valley of Urubamba to the "Lost City of the Incas," Machu Picchu.

Perched 8, 200 feet above the valley, it was hidden by mountains and semi-tropical jungles for 400 years until discovered by Hiram Bingham of Yale University in 1911. Archaeologists believe that the Inca "Virgins of the Sun" took refuge from the Spanish Conquistadors here.

Enjoy a private guided tour of the ruins. Enjoy lunch at the Sanctuary Lodge before exploring the ruins on your own, Visit the Sun Gate, the Inca Bridge or climb Huayna Picchu.

Tonight you stay at the Sanctuary Lodge hotel.

The Belmond Sanctuary Lodge is the only hotel located adjacent to the ancient Inca citadel of Machu Picchu.

It offers its guests exceptionally easy access from early morning to late afternoon, when most of the day visitors and buses have left.

Sit out on a terrace and savour Peruvian cuisine based on produce grown on the Lodge’s own plot: this delightful hideaway is the perfect place to relax and unwind in the shadow of the Lost City.

Machu Picchu and return to Cusco

With easy access to the entrance of the ruins you have the morning with your guide for further explorations of the ruins.

At a set time you return to Cusco via the Hiram Bingham train. This afternoon is free for last minute shopping.

An early breakfast and you are transferred to the airport for your flight to Lima. On arrival you are once again transferred to your hotel where a day room has been reserved.

The day is free to wander the street of Miraflores for any other last minute shopping or to simply savour the bustling modern Lima.

Early evening you are taken from your hotel to the Larco Museum where you have a private tour with the curator before enjoying your last dinner I Peru at the museums excellent restaurant.

From here you are transferred to the international airport for your onward travels.

Can we entice you into visiting the Amazon on one of our luxury Amazon Cruise vessels or maybe a 5 star adventure over the Nazca Lines with a night of dining in the Peruvian desert?