Experience the history and nature of Mexico on this unforgettable journey through the nation. Begin in Mexico City, where you’ll explore the historical city centre before heading north to Piedra Herrada to see the monarch butterflies. Then jet west to reach La Paz and the coast of Baja California Sur, home to calving gray whales and breathtaking ocean views. 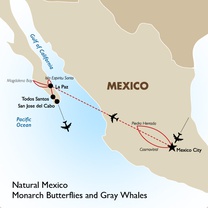 This 8-day Mexico vacation takes you from Mexico City to the coastal towns of La Paz and Todos Santos in Baja California Sur.

Your Mexican vacation package begins in Mexico City, the country’s capital and one of the largest cities in the world. As an epicentre of western civilization for over 500 years, Mexico City has a lot to discover. It is big, old, and full of constant innovation. You’ll find new things to experience around every corner, from pre-Columbian ruins to colonial mansions to some of the grandest churches in the Americas. The city works hard to make you forget about the headlines plaguing parts of Mexico and it won’t take you long to forget about all troubles and lose yourself in the vibrancy of the culture.

On your first full day, you’ll head on a historical tour through the city centre to explore its cultural heritage. Starting on Reforma Avenue, you’ll wind your way through the city before ending at the Anthropology Museum, which charts the origins of Mexican civilization and houses treasures from the Aztec, Olmec, Maya, and Teotihuacan empires. Along the way, you’ll see popular landmarks like the Palacio National, home to the federal government, and Templo Mayor, which was the main temple of the city prior to European contact. The next day, head northwest 95km to the Sanctuary of Piedra Herrada and the Monarch Butterfly Biosphere Reserve. Pass through the nesting forest of the Monarch Butterflies, allowing these majestic insects to swarm around you in the air. After gazing upon thousands of these gorgeous butterflies and learning about their epic migration patterns, you’ll return to Mexico City, stopping off at Toluca to see its famous Art Nouveau Botanic Gardens along the way.

From Mexico City, continue your Mexican vacation by jumping west across the country and making for Baja California Sur, the peninsula that juts out of the south of California in the United States. Here, you’ll stay in La Paz, the capital of the state and a picturesque port town on the Pacific Ocean. While here, you’ll explore the natural wonders of the coastline. One day, head to Magdalena Bay to see where mighty gray whales give birth in protected waters. If you’re lucky, you’ll spot a mother and her calf in the glimmering waters. The next day, head to the island of Espiritu Santo to gaze out upon the Sea of Cortez and revel in the breathtaking juxtaposition of reddish limestone cliffs and turquoise blue sea. On your final day in Baja California Sur, head to the town of Todos Santos to learn about the state’s sugarcane industry and explore a urban centre of historic houses, boutique art galleries, and traditional workshops. At the end of your Mexico vacation, connect to the airport to continue your onward journey.

On arrival into Mexico City, you will be met be and transferred to your hotel.

Tour the historical surroundings of Mexico City. You will drive down Reforma Avenue, built by the emperor, Maximilian, along which some of the most important monuments in the city are located; Juarez Avenue, along La Alameda Park and the Palacio de Bellas Artes, designed and erected by the Italian architect, Adamo Boari; then 5 de Mayo Street, until reaching the main square or Zocalo.

At this last site, you will visit Palacio Nacional, current seat of the government, which walls are decorated with frescoes by Diego Rivera, one of Mexico's great contemporary painters; the Cathedral, a living example of colonial architecture; and the Templo Mayor (Main Temple). Later, the tour takes you to Chapultepec Park, driving through Las Lomas residential area, one of the most high-end neighborhoods of the capital city. The largest museum in Mexico. The building is one of the most beautiful examples of Mexican contemporary architecture.

After lunch you will visit the famed Anthropology Museum. Here you will visit the Mesoamerica halls, where the origins of ancient Mexico's civilizations will be revealed; Teotihuacan, Aztec, Olmec (the mother culture) and the Maya civilization that developed in the Mexican southeast and in part of Central America, whose greatness has been recognized for its advanced knowledge of architecture, astronomy, mathematics, philosophy and art.

It is a very early departure to the Sanctuary of Piedra Herrada and the Monarch Butterfly Biosphere Reserve. A UNESCO World Heritage site, and one of the most important ecotourism destinations in Mexico, the reserve is located 95 kilometers northwest of Mexico City, and extends over the limits of Michoacan and the State of Mexico, in the highlands of central-western Mexico.

After a literally immersion in one of nature's most mysterious migrations, you return to Mexico City with a stop in Toluca, the capital of the State of Mexico and visit the famous Botanical Gardens. The building in which it was originally housed a market that was built in 1909 and operated as such until 1975, when it was decided to turn it into a botanical garden respecting the style of its original construction "Art Nouveau". The large windows were used, transforming them into a Cosmovitral (stained glass mural) whose complete structure is made up of 71 modules totaling three thousand square meters.

After breakfast you will be transferred to Mexico City the airport to board your flight (not included in the trip price) to the capital of Baja California. On arrival you are transferred to your hotel.

With only 220,000 inhabitants and being the commercial and political center of the region as well as the state of Baja California Sur, La Paz remains a tranquil port town. It reflects a provincial atmosphere that suggests that little has changed here for decades.

From La Paz, travel to Magdalena Bay. Baja California is well known as a great place to see whales. Along its Pacific coasts there are three main lagoons where whales return every year. The three areas offer an excellent place to observe Gray whales up close.

The gray whale spends summers in the waters of Alaska and then heads south to the warmer Baja lagoons in January, February and March. Their main reason for heading south is to mate and give birth in shallow protected lagoons in Baja California. No other place on Earth offers such an experience.

This lagoon on the Pacific side of Baja California hosts an incredible number of marine species. Seeing a whale gliding silently under your boat is an experience that will last forever.

The island of Espiritu Santo is the closest to the bay of La Paz and has the most impressive views of all the islands in the Sea of Cortez. Its contrasting desert landscapes and reddish limestone cliffs juxtaposed with a turquoise blue sea are an impressive example of the exquisite views found here. Travelers from all over the world visit the coves and canyons of Espiritu Santo to camp, dive or just relax on its beautiful beaches.

Today enjoy a visit to Ensenada de Pescadores, a quiet beach with few visitors. The huge crater walls that surround this area and the vast expanse of shallow water provide a spectacular view.

Today you move onto Los Cabos with a stop to enjoy the town of Todos Santos.

Todos Santos is a small town on the shores of the immense Pacific Ocean. It was founded as a mission in 1774 and later became a major producer of sugarcane. It is located just south of the Tropic of Cancer. This town has been declared by the Mexican government as a historic city. It has always been considered a special place as reflected in its live theater, in its art galleries, centers for workshops and seminars, as well as historic houses. The cultural vocation of this picturesque town has attracted artists, painters, sculptors, artisans, poets and intellectuals who have settled there.

Continue to San Jose del Cabo and your hotel.

After breakfast you are transferred to the airport for your onward travels.