FIRST-CLASS | PRIVATE-GUIDED: Experience the contrasts of Panama in this fantastic weeklong adventure. This program allows you to combine tours to historical areas, a visit to a tropical rainforest, and of course an exploration of the famous Panama Canal. 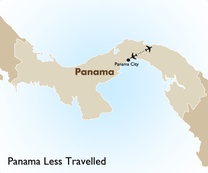 Exploring a modern, well-developed country that links the Americas, this 7 day tour offers an ideal introduction to Panama.

Spend a full day seeing the sights of Panama City, both colonial and new, including the cathedral tower, the Old Panama Museum, and the historic Casco Viejo district. A visit to the Panama Canal Museum is a must, as is a stop at the Miraflores Locks to see ships transitting the Panama Canal. The following day, you’ll have a chance to kayak in the Panama Canal, or follow The Pirate Trail to the Castle of San Lorenzo on the Caribbean coast.

Enjoy a partial transit of the Panama Canal before spending a day at leisure seeing Panama your way. You may want to spend the day learning about life in an indigenous village in Chagres National Park, or take a boat into the heart of the rainforest and try your hand at fishing for peacock bass on Gatun Lake.

On your arrival into Panama, you will be met at the airport and transferred to your hotel in Panama City where you will receive a Panama information kit. The balance of your day is at leisure.

Morning tour of Old Panama, climb up the Cathedral tower, the Old Panama Museum and Casco Viejo, the old city compound, which dates from the late 1600's. Learn about the events in history leading up to the eventual movement of the capital city to its present location. See monuments to Ferdinand de Lesseps and other Frenchmen instrumental in the ill-fated attempt by the French to construct a canal through Panama. Continue on to visit the Miraflores Locks at the Panama Canal where large ships can be seen transiting the canal. Enjoy a presentation on the history of the Panama Canal and marvel at the workings of this feat of human engineering. Lunch will be in a local restaurant. Continue to the Panama Canal area and the town of Balboa. Stop at the folk art market at the old YMCA building. Late afternoon you will return to your hotel in Panama City.

Once you arrive to Colon province you will have the opportunity to visit the Agua Clara Visitors Center and be amazed by the panoramic view of the Agua Clara Locks. It has the same concept of the Gatun Locks, but was reinvented to handle bigger cargo, re-using water and locking the chambers with rolling gates. After enjoying the panoramic view, continue onto the screening room where you will learn more about the construction and effort of several Panamanians of this modern engineering masterpiece.

After passing through old military ground you will arrive to Fort of San Lorenzo, a UNESCO World Heritage Site, built at the mouth of the Chagres River. This Spanish bastion served to fortify and protect the river entrance to Las Cruces Trail that led to Panama City on the Pacific Ocean. This entrance was later used as the port of entry for gold diggers on their way to California during the second half of the 19th century. You will be traveling through lush rainforest within San Lorenzo National Park, where you might have the opportunity to see monkeys, Two and Three-toed sloths, coatimundis, toucans and other wildlife. Lunch included in a local restaurant.

After the tour you will be transferred to the train station for your ride to Panama City. The Isthmus Railway offers an unforgettable experience joining two oceans. This is one of the most important historic routes in Panama. Relive the experience of the California Gold Rush and enjoy this scenic ride: observing the rain forest in the heart of Panama from inside your train car.

Your Panama Canal tour starts with an early morning pick-up at your hotel for a short transfer to Flamenco Island, at the Causeway of Amador on the Pacific side of the canal. You will first sail under the bridge of the Americas, which raises over 100 meters above sea level and reunites the land divided during construction of the canal forming another link in the Pan-American Highway. Lunch is served in buffet style. The Panama Canal is 80 kilometers long from deep waters in the Pacific Ocean to deep waters in the Caribbean Sea. It was cut through the lowest and one of the narrowest saddles of the long mountainous Isthmus that joins North and South America. The original elevation was 95 meters above sea level where it crosses the Continental Divide. You will cross the two locks at the Pacific side: Miraflores and Pedro Miguel locks, before meeting a vehicle which returns you to your hotel.

Note this Transit can either go northbound or southbound it depends on the day and Panama Canal Authority. The above description describes the northbound transit. Also please note that due to the dry season and low water levels in Gatun Lake, which provides water to all the Canal operations, the Panama Canal Authority has implemented strict water conservation guidelines. These measures restrict transit schedules and may cause changes in Canal Transit departure times. A representative will be in contact with you the day before the transit to confirm the pickup transit time.

Today you will have a free day for relaxation and exploration of the nearby areas on your own.

Optional activities can be arranged upon request.

Transfer back to the city with a stop at Miraflores Locks where you can admire the full operation of the Panama Canal. Check in and overnight at your hotel in the city.

Today you will be transferred to Tocumen International Airport for your outbound flight.

Departure days depend on schedule of operation of Panama Canal, please enquire with our Destination Specialists.

Prices are “from” per person and based on twin share based on current exchange rates and subject to change. Subject to availability, limited seats available, seasonal surcharges may apply.