DELUXE | PRIVATE-GUIDED: Head to Peru’s north to explore lush rainforest and pre-Incan ruins. On this vacation, you’ll see the third-tallest waterfall in the world, Gocta Falls, explore the Chachapoyas citadel fortress of Kuelap, and visit the Leymebamba Museum to see mummies and other ancient relics. 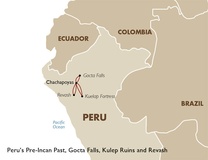 This 5-day Peru vacation takes you to the pre-Incan sites in the north of the country.

If you’re itching to get off the “Gringo Trail” of southern Peru, take a one-hour flight from Lima to Jaen in the north of the country and head on incredible rainforest excursions to archaeological sites predating the Incan Empire. First stop is Gocta Falls, the third-tallest waterfall system in the world. Only outstripped by Angel Falls and Victoria Falls, Gocta Falls stands 771 metres tall. Take an 11 kilometre hike (return included) through the Andean Cloud Forest to reach the falls. The moment you break through the rainforest and are met with a blast of fresh air at the base of the falls is magical.

After surveying this mighty waterfall, head to Kuelap Fortress, one of the oldest stone monuments in the Americas. Sitting on the top of a mountain plateau, Kuelap was built by the Chachapoyas but disappeared from history in the Middle Ages, only to be rediscovered in 1843. Hike up the mountain or ride the newly-built cable car to ascend its massive stone walls and enjoy breathtaking panoramas of the surrounding jungle. As you survey this citadel fortress, you’ll marvel at the remarkable preservation of the ruins and learn about the legends that surround the fortress.

You’ll continue an exploration of ruins at Revash, a cemetery town near Santo Tomas. Revash is remarkable for how its tombs appear to be red and white buildings decorating the cliff side. Explore the town and make a circuit of its tomb villages before heading to Leymebamba Museum, where you can see 200 mummies and burial offerings from the nearby region. Although these mummies used to be fodder for tomb robbers and desecration, the museum now preserves them and lets you learn more about pre-Incan societies like the Chachapoyas, as well as the modern peoples who inhabit the rainforest areas in Peru’s north.

This Peru vacation exploring the North’s pre-Incan past is an ideal add-on to longer explorations of Lima and the Sacred Valley of the Incas.

Offering an outdoor pool and a restaurant, Gocta Andes Lodge is located in Chachapoyas. Guests can enjoy a buffet breakfast each morning at this lodge, just 3.7 miles from the Gocta waterfalls.

The walk to the base of the falls begins at Cocachamba, the small town where the Gocta Lodge is located. It is here where you register for your trek and where you begin the 11km return trek to the base of the world's 3rd tallest waterfalls, after Angel Falls in Venezuela - the world's highest uninterrupted waterfall, with a height of 979 meters (3212 feet) and Victoria Falls - 885 meters (2900 feet) in Zimbabwe: Gocta Falls at 771 meters (2529 feet).

At 5.5km each way, the distance is not challenging but being in the Andean Cloud Forest at about 1200 meters (3937 feet), the temperature is surprisingly humid and that, combined with some extreme up and down tracks, makes the trek an achievable but challenging one.

The effort is well worth it! As you round a corner and come out of the cloud forest to stand the base of Gocta you are face to face with water plummeting from the secondary section of the falls. The water falling, displaces the air and after the humid trek you are met with a fresh spray of water blasted from the falls. For those that want to walk that little bit more, you can continue to the pool formed by the falling water but, be warned you will get very wet this close to the base of the falls.

Kuelap Fortress, atop a mountain plateau and removed from all around it, was forgotten by the modern world until in 1843 when Juan Crisostomo Nieto rediscovered the site. Quickly it became an object for explorers, historians and archaeologists. Since then word has spread and more and more people have been enchanted by its mystical history and beautiful surroundings.

Built by the Chachapoyas, the fortified citadel of Kuelap was home to the Warriors of the Cloud in Peru, before they were conquered by invaders. Massive stone walls and hundreds of ruins stand as a reminder of a formidable culture lost to history. The purported site at which the Inca King Huayna Capac, was poisoned and killed, leading to the civil war that wracked the empire just before the Spanish Conquistadores landed, Kuelap is at the cross roads of ancient and modern Peruvian history.

Kuelap is one of the largest ancient stone monuments in the New World, and is located 3,000 meters (approximately 10,000 feet) above sea level on the slope of the Andes in northern Peru. Getting to the peak is easy as you take the newly built, and highly exhilarating cable car ride to the summit. For those wishing to escape the "gringo trail" of southern Peru and explore a region few have visited a visit to Kuelap - "father to Machu Picchu ruins" - is a moderate physical undertaking but highly rewarding.

Offering a terrace and views of the mountain, La Xalca Hotel is situated in Chachapoyas. Free WiFi is offered throughout the property and free private parking is available on site.

Revash is a collection of tombs near the town of Santo Tomas. The tombs look like houses and are set alongside the ledges of limestone cliffs. The tombs of Revash are built from mud-set stones and are painted in red and white hues. The buildings look like small houses and seem to form mini villages along the face of the cliff. A winding road up and into the Andes take you to a small town from where you begin a short 3k, trek to the ruins. It is an easy walk with a few up and downs.

Opened in June 2000, the Museo Leymebamba displays the more than 200 mummies and their burial offerings recovered in 1997 from the near-by Laguna de los Condores. Once at risk from looters and vandals, today this valuable collection is housed in the Museo Leymebamba. An initiative of The Bioanthropology Foundation Peru-Centro Mallqui, the Museo Leymebamba's construction was made possible by a donation from a group of Austrian citizens as well as by funds from private donors.

Literally built by hand, by the people of Leymebamba, the museum is an amazing insight into the pre Incan cultures that predominated what is modern day Peru and in particular the burial offerings indicateof the Chachapoya (ca. AD 800-1470), Chachapoya-Inca (ca. 1470-1532) and early Colonial (ca. 1532-1570) times.

In addition to the three museum halls dedicated to the archaeological finds from the Laguna de los Condores, an ethnographic hall presents the varied lifestyles of the region's modern inhabitants, and a fifth hall is designed to host cultural and scientific activities.