Visit Potosi, a famous colonial city and main source of silver during Spanish colonial times. Explore the mines, visit the mint and discover why a trip to Potosi is a trip back in time. 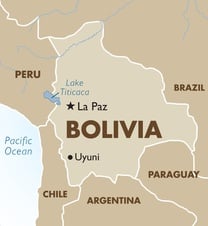 3 days in Potosi reveals one of the most fascinating city histories in South America.

Soon after it was founded in 1546, Potosi rose on the world’s richest silver mines to become one of the largest, most prosperous cities in the Americas. The city’s wealth was eventually depleted, but old habits die hard. The Casa de la moneda (house of money) is just one sight you’ll visit on a half day tour, along with the variety of museums and churches that line the narrow streets. You’ll also visit the mines and mint that powered the city for much of its early history.

The Coloso Potosi Hotel is centrally located at the heart of Potosi's historic city center. The hotel is just 5 minutes walking from Potosi's Main Cathedral, museums and other places of interest.

The town of Potosi is characterized by its baroque architecture, the beauty of its churches, monasteries, temples, palaces and mansions that adorn the narrow streets. The town is located 4,070 meters above sea level, it is one of the highest cities of the world, located at the feet of the Cerro Rico. During the city tour, we will visit the Place 6 de Agosto, the Plaza 10 de Noviembre, museums, churches and the famous Casa de la moneda (house of money), local markets and the surroundings.

Half Day Mine in Cerro Rico

The city of Potosi was born under the name of Villa Imperial de Carlos V, in honor of then Spanish king Carlos V. Large-scale excavation of the silver deposit began on the site immediately and the first shipment of silver was sent to Spain.

In 1672, a mint was established to coin silver and water reservoirs were built to fulfill the growing population's needs. At that time more than eighty six churches were built and the city's population increased to nearly 200,000, making it one of the largest and wealthiest cities in Latin America and in the world.

During the early 19th-century, struggles for independence in the city caused many churches to be looted. Then the city's wealth was removed to Europe or to other parts of the Spanish realm. By then the population dropped to less than 10,000. By the time of independence in 1825, the mines of the Cerro Rico were almost exhausted. In the mid 19th century, a fall in silver prices hurt Potosi's economy in a way from which it has never completely recovered. On December 11, 1987 (in Paris, France), UNESCO declared the city of Potosí a "World Heritage Site" in recognition for its rich history and its wealth of colonial architecture.

The ore has been extracted by miners in some of the most abysmal conditions imaginable - a visit to see today's miners at work provokes disbelief at just how appalling the job is. But the rest of Potosi - its grand churches, ornate colonial architecture and down-to-earth, friendly inhabitants - is a real delight.

The almost "Dark ages" mining techniques witnessed on a tour into the mines is like stepping back in time. En route to the mine we visit the mint where the coins were stamped as well as stopping to buy dynamite and coca leaves for the miners