Tikal is one of the world's travel wonders. This monumental site, with its towering pyramids, looms out of the thick jungle canopy like stoic sentinels of ancient mysteries. 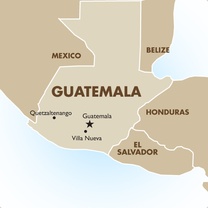 If you’re coming to Guatemala just for temples, you’re going to miss a lot. But if you are pushed for time, this 3 day stopover lets you explore Tikal, the crown jewel of Central America’s Mayan ruins. Stand in the Great Plaza and be taken back in time as the 70 metre high temples tower over you. An afternoon tour takes you to the highlights of this ancient city, with time on your own to explore its many sites.

This eco-friendly hotel offers a restaurant and a bar/lounge. Complimentary wireless and wired high-speed Internet access is available in public areas and an Internet point is located on site. Business amenities include small meeting rooms and audiovisual equipment. Additional amenities include an outdoor pool, a terrace, and multilingual staff.

Tikal National park is a UNESCO protected site. Huge Mayan temples rise above the jungle canopy and monkeys and tropical birds are abundant in the surrounding rainforest. Tikal is among the world's travel wonders, many calling Tikal one of the most spiritually powerful spots on earth. The monumental site with its towering pyramids looms out of the thick jungle canopy like stoic sentinels of ancient mysteries.

Tikal was once a wealthy metropolis of 100, 000 inhabitants and the seat of power for the great Jaguar clan lords. Today, Tikal attracts archaeologists from all around the globe and the wild-life surrounding the ruins makes it a naturalist's dream.

Your tour takes you through the heart of the more than 3, 000 structures extending over six square miles including palaces, temples, ceremonial platforms, ball courts, terraces, plazas, avenues and steam baths.

The Tikal National Park is not only home to an ancient Mayan City. Screeching howler monkeys and squawking parrots provide nature's soundtrack to all visitors in the area. From monkeys to white lipped peccary, brocket deer, coati-mundis, toucans, scarlet macaws, parrots, ocelots; even the seldom jaguar can occasionally be spotted. Along with many vegetation and spices there is also an abundance of tropical flowers.

After the guided tour you have time to explore on your own, possibly summit one of the tall temples or simply reflect on what was once the grand Mayan civilization.