Valleys of the North West 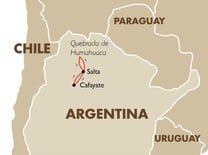 Salta is a city located in mountainous north western Argentina, known for its Spanish Colonial architecture which has been better preserved than in other Argentinean cities. It is a sophisticated city with outstanding museums and plaza-side cafes and much live music. Situated in the Lerma Valley, Salta is 1150 metres/3780 feet above sea level in the foothills of the Andes Mountains.

On your first of 3 days here, you will have an extensive tour around the old city viewing the Cabildo (former seat of government), the Cathedral, the San Francisco Church, the San Bernardo Convent, the National University, theVaqueros River and the craft fair.

On your final day, visit the second most important city in the Salta region, Cafayate. It is
Argentina’s second centre for quality wine production and is a popular tourist destination with vineyards backed by the soaring mountains beyond. You will visit a winery here. On the way back to Salta, stop at the roadside Posta de las Cabras to shop for a variety of products including local cheese and wines.

Catch up with family, friends, and colleagues during an unforgettable stay at the Sheraton Salta Hotel. Nestled in one of the destination's most aristocratic locales, our hotel is just 10 blocks from Salta's bustling city center, and features a panoramic view of the Lerma Valley. Relax and enjoy your time spent in the welcoming neighborhood of Monumento.

Salta, the most splendid of all Creole cities, sits at the foot of 20 de Febrero and San Bernardo hills. In an extensive tour around the old city, you will discover the Cabildo, Cathedral, San Francisco Church, San Bernardo Convent, San Bernardo Hill, National University, Vaqueros River, Castellanos Stream and the craft fair.

Surrounded by high mountain ranges and carved by the Grande River, the magnificent Quebrada de Humahuaca, declared a World Heritage Site by UNESCO, displays a heavenly landscape with the small villages of the area. Sharing history and ancient traditions, its residents still practice their traditional beliefs, rituals, art, festivities, and agricultural techniques. You will travel Sub-Andean valleys, crossing San Salvador de Jujuy, Leon y Yala, before reaching the Quebrada's main gate. Starting here, you will visit Purmamarca at the foot of Cerro de los Siete Colores (Seven Colors Hill), Tilcara, with its colorful crafts and looms fair and Pucara, where you will visit the ruins and the Anthropological Museum. Finally, you arrive at the historical city of Humahuaca where the Church and Cabildo visit are a must.

Only 183 km away from the capital of Salta, Cafayate is undoubtedly the second most important city in the Salta region. It stands out for the torrontes (white and fruity) wine production which is possible due to the combination of temperature and humidity in this region.

Starting at Cerillos Watch, you will travel across El Carril, Coronel Moldes, Ampascachi, Talapampa, and Quebrada del Rio Las Conchas arriving at Cafayate, a village located within Valles Calchaquies, where you will visit a winery. On your way back to the city of Salta, soak in the quebrada at sunset and stop at Posta de las Cabras, a typical roadside stop with a wide variety of products are available including local cheese and wines.