FIRST-CLASS | TAILOR-MADE: Explore Chile’s capital and unlock the secrets of Rapa Nui - aka Easter Island - on this combo tour. Starting in Santiago you’ll see city highlights old and new, visit the nearby coastline of Valparaiso and then connect to Rapa Nui to delve into the island’s mythical history and see the iconic Moai. 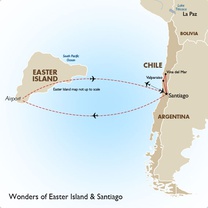 This 6-day Chilean vacation takes you to Santiago before venturing to Rapa Nui/Easter Island. It features first-class or moderate accommodations depending on your preference, shared tours, and is a great mix of South America and the South Pacific.

Your journey begins in the Chilean capital, Santiago, where you’ll get to experience some of the highlights of this surprising city. A city tour starts at the Plaza de Armas and takes you to Moneda Palace, Santa Lucia Hill, and Huelen. Stop for lunch at Barrio Lastarria, home to some of the city’s most celebrated dishes, before reaching the financial district, “Sanhattan,” named after its resemblance to New York City. While staying in Santiago, you’ll also head on a day trip to Vina del Mar and Valparaiso to admire Chile’s lovely coastline, sample some local seafood, and have the option of a boat ride through Valparaiso’s bay.

From Santiago, connect to Rapa Nui/Easter Island, the lovely and mysterious Polynesian Island off the coast of Chile in the Pacific Ocean. Rapa Nui/Easter Island has long fascinated people across the world, so it’s your chance to delve into its secrets over the next few days. Start with a half day tour that’ll showcase the iconic Moai that are dotted across the island. You’ll also learn about the island’s history and see the quarry of Puna Pau, where you can see unique Moai known as Pukao, which are designed with red hats on them. The next two days are spent further exploring Rapa Nui. Learn about Hotu Matua, the first king of the island, and see where many of the Moai were constructed. You’ll also visit the ceremonial centre of Orongo with its rock paintings and archaeological excavations, as well as Rano Kau volcano.

At the end of your stay, you’ll connect back to Santiago and return home.

On arrival you will be met and transferred to your hotel. As most flights arrive early morning, you have time to freshen up before heading out on a city tour.

Discover Santiago, a cosmopolitan city which has become one of South America's most modern hubs.

Described by the international media as a surprising destination, Santiago stands out for being a cosmopolitan and modern city that perfectly combines its traditions with a modern outlook.

The tour will take you to visit the heart of the city and its emblematic sites such as the Plaza de Armas, the Cathedral, Santiago's Central Postal Office and its Municipality. You will also visit the Moneda Palace, which is the government's headquarters as well as the traditional neighborhoods of the historic city center.

The tour also includes a visit to the Santa Lucia hill, named Huelen by the natives. It is a real urban oasis in the center of the city. There you will learn more about Chile's history and enjoy some of the best views in the city. After learning about Santiago, you will arrive to Barrio Lastarria, famous by it cultural, inherited and gastronomical offer.

The second part of the tour will take you to the eastern side of the city, to the financial heart of Santiago, known for its modern buildings, impressive glass skyscrapers and its impressive sculptures designed by prominent national architects. There, you will see exactly why this area is known as ''Sanhattan'' among the locals.

At the end of the day you are transferred back to your hotel.

Known as the ''Garden City'', for originally being surrounded by largely green areas and for now preserving its extensive and beautiful urban gardens, with the Pacific Ocean as its backdrop, Vina del Mar is undoubtedly one of Chile's unmissable destinations.

Vina del Mar stands out for its beautiful architecture, its impressive palaces and famous Flower Clock, photographed by tourists from all over the world. During the tour, you will have the option to have lunch in one of the numerous restaurants in the city, with a variety of delicious sea food on offer. Travel along the sea front, and enjoy the views of the Pacific Ocean, before arriving at the most important ports in Chile; Valparaiso. It was listed as a Unesco World Heritage site thanks to its colorful beauty and the uniqueness of its location on the hills, which create a natural Amphitheatre with the ocean as its stage. Then visit Cerro Alegre, where you can truly appreciate the magic of the city, with its picturesque funiculars, multi-colored neighborhoods and unforgettable sea views. You will then head to the Sotomayor Square, to see the Monument of the Heroes of Iquique. Once in the port, there will be the option to take a boat out around Valparaiso's bay to enjoy the views of the colorful hills from a different perspective.

On arrival into Easter Island, you are met and you begin a half day tour of the island.

The tour includes ceremonial centers erected in the central area of the island during the last period of construction of Moai, the most important of the Rapa Nui culture. They emphasize megalithic archaeological sites that show how astronomy determined the disposition of the giant statues and the platforms in which they are held, with which it is possible to enter into the worldview of the ancient Polynesian navigators who populated Easter Island.

All points visited incorporate old sites that were created and used during the end of the Ahu-Moai phase. These sites represent various cultural developments of Rapa Nui history, all strategically deployed around ceremonial centers.

Sites include (subject to change): Ahu Huri to Urenga, Ahu to Kivi, Ahu Vai Teka and the quarry of Puna Pau, where the most attractive Pukao are (hats or headgear of red scoria that crown the heads of some Moai).

End of the day you will be dropped at your hotel.

Learn of Hotu Matua, the first king, who started a settlement that lasted more than 700 years and is recognized as the most prolific period of island culture

You visit the possible site where the Kings tomb is believed to be and some of the places where a large part of the giant statues that populate Easter Island were built.

The route begins in the town of Hanga Roa, heads towards the Anakena Beach along the road to the center of the island - sector known as Vaitea - and concludes with the return to Hanga Roa along the south coast of Rapa Nui.

Before flying back to the mainland enjoy a half day tour Orongo and Volcan Rano Kau, some of the most important ceremonial centers of Easter Island. The tour includes rock paintings and archaeological sites of great cultural value, an ascent to the Rano Kau volcano and an interpretive trail through the ancestral town of Orongo.

This route allows you to enter Rapa Nui mythology, learn about important elements of the island's geography and understand the enigmatic history of the ancient inhabitants of this isolated point of the planet.

This visit incorporates the places where the Tangata Manu (Bird Man) competition is developed annually, based on a fundamental legend of the Rapa Nui culture. The myth points out that the man who captures the first Manutara egg (characteristic of the Pasco-bird) will be invested with supernatural powers and will exercise the political-military leadership of the island for a year.

At the end of the tour, you are transferred to your hotel.

After breakfast, you are taken to the airport for your return flight to Santiago (NOT INCLUDED in the trip price)