FIRST-CLASS | CRUISE: Experience six incredible cities during this unforgettable cruise of the Baltic Sea. Embark from Copenhagen, Scandinavia's most cosmopolitan city, and experience the fascinating Brandenburg Gate and Reichstag in Berlin, Peter the Great's Kadriorg Palace in Tallinn, the palaces and cathedrals of St. Petersburg, and so much more. 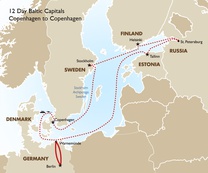 Board your cruise ship in Copenhagen, Denmark’s vibrant and lively capital. It is a fairly compact city allowing you to reach many of the major highlights on foot. It has a strong character reflected in its architecture and criss-crossing canals and harbour. Copenhagen is known for its excellent shopping, culture and nightlife. You have the choice of two shore excursions. A tour of the city includes all the major sights such as the Little Mermaid, Amalienborg Palace and the colourful Nyhavn district. A shorter tour covers the Amelienborg Palace, the Kongons Nytorv Square and the old fish market and more.

The next day, you will arrive at Warnemunde where you can go ashore and head by train to Berlin, the German capital known for its internationalism and tolerance, lively nightlife, its many cafés, clubs, and bars, street art, and numerous museums, palaces, and other sites of historic interest. There is a choice of three shore excursions. The Best of Berlin covers 10 major highlights. The Panoramic Berlin and Concentration Camp includes a tour of the city and a visit to the former Nazi concentration camp Sachsenhausen. The third is a combination of a Berlin city tour and a visit to the interesting city of Potsdam.

Berlin is followed by a full day at sea before arriving the following day at Tallinn in Estonia. Probably the most fascinating part of the city is the medieval old town with its twisting cobblestone lanes and iron street lamps, Gothic spires and medieval markets. However, there are many cafes, restaurants and boutiques if you are looking for a mix of historic ambience and cutting-edge culture that defines Tallinn, Here you have the opportunity to have a medieval experience touring the old town of Tallinn followed by a concert of medieval music. Or you can enjoy a walking tour of the city which includes a visit to a market and an arts and craft centre. Another tour takes you through the picturesque countryside to one of Estonia’s oldest towns, Rakvere with its interesting museum and 13th Century castle.

The following day, arrive in St. Petersburg where the ship docks for 2 nights. Known as the cultural capital of Russia, St. Petersburg is a beautiful city offering a blend of European architecture and Russian history. Situated on the eastern tip of the Baltic Sea, St. Petersburg is Russia’s second largest city, and has Neva River running through its centre. Here, the choice of shore excursions include a 2-day extended tour of St. Petersburg which visits the renowned Hermitage Museum, the Peter and Paul Fortress among other highlights and an out of town excursion to Catherine’s Palace in nearby Pushkin. You can also have a tour to just Catherine’s Palace followed by the Hermitage or a visit to Peterhof, a palace built for the Czar, Peter the Great, with its gardens and fountains. Your second day in St. Petersburg is free to explore the city on your own.

The ship then sails on to Helsinki in Finland. There are many major sights to enjoy in Helsinki. There is the popular with locals, Esplanade Park in the heart of the city and Helsinki Cathedral is a beautiful and historically significant Evangelical Lutheran church. Senate Square dominated by four buildings designed by Carl Ludvig Engel shows off its Nordic architecture with the Cathedral, the Government Palace, the main building of the University of Helsinki and the National Library. Not to be missed is the Sibelius Monument in Sibelius Park which resembles organ pipes with a bust of the composer on one side. Here you can have a choice of three shore excursions. One takes in the city’s highlights which include Senate Square, the Olympic Stadium, Sibelius Monument, Tempelliaukio Church and other historic landmarks. Another takes in many of the city’s major attractions plus a visit to the Seurasaari open-air museum with its portrayal of 400 years of Finnish life. Or you can combine a tour which is by boat and on land sailing through islands full of parks and gardens

The next day brings you to Stockholm in Sweden. The city is spread over 14 islands connected by 50 bridges on the south east coast of Sweden. It combines classical and modern architecture reflected in many of its interesting buildings. It is a city rich in culture and history. You can take a tour covering Stockholm’s major sights which will also visit the remarkable Vasa Museum. Another tour covers the old town of Gamla Stan and the Royal Palace plus the fascinating Vasa museum.

Stockholm is followed by another day at sea before arriving back in Copenhagen. If you didn’t have the opportunity on the last visit, you can take the tour of the city which includes all the major sights such as the Little Mermaid, Amalienborg Palace and the colourful Nyhavn district. Or you can have the shorter tour which covers the Amelienborg Palace, the Kongons Nytorv Square and the old fish market and more.

Your Baltics cruise comes to an end as you disembark in Copenhagen.

Housed in 2 converted warehouses from the 1800s, this hotel is found in the vibrant Nyhavn District. It features an elegant French-inspired restaurant and rooms with free Wi-Fi and flat-screen TVs.

The popular Copenhagen Canal Boat Tours depart just outside the door, while the 18-century Amalienborg Palace is reached within 10 minutes on foot. Stroget, Copenhagen's main shopping street, is 650 metres away.

The capital of Denmark, Copenhagen, is filled with canals, cobbled squares and copper spires. But don't let the historic appearance fool you. This is also Scandinavia's most cosmopolitan city. Certainly you can relive medieval times in The Latin Quarter, but you can also enjoy some of Europe's finest shopping, museums, cafes and night life prior to your cruise around the Baltics. Explore more of Copenhagen on a European cruise!

It's been more than two decades since the walls came down and Berlin became unified in many ways, including the pursuit of joy. Germany's capital city is a city that balances cosmopolitan chic with a liberal undercurrent of creativity and cool. Famous landmarks like the Brandenburg Gate and Reichstag fascinate. The elegant Bavarian Quarter amazes.

The capital of Estonia impresses cruise guests with its mix of medieval houses and very modern boutiques and cafe culture. Journey inside the ancient walls of Old Town to explore stunning Medieval landmarks like Toompea Castle and a 15th Century apothecary shop. Move up a couple centuries to experience Tsar Peter I's Kadriorg Palace, filled with art and surrounded by sculpted gardens and peaceful woodlands.

Founded by the Russian Tsar, Peter the Great, St. Petersburg has for centuries been the cultural centre of Russia, with its spectacular architecture, Tchaikovsky operas and the famous Kirov ballet. It has undergone many changes over the decades, but "The Venice of the North" remains a dazzling cruise destination, a Russian city with a European flair, a city with more than 200 museums, and one of the largest English gardens in Europe!

Welcome to Scandinavia's "White City of the North," a city defined more by its people and Art Nouveau architecture than its chilly climate (from October to April). Helsinki is a classic sea-city, with a dramatic coastline coloured by bays and inlets. The city keeps its historical roots intact. Explore more of Helsinki on a European cruise!

When your cruise ship pulls into this small Swedish port, you'll be greeted by ferries transporting travellers to Gotland island. Nynashman hosts a harbour party each summer where boaters and travellers alike flock. The small and laidback town offers picture-taking opportunties from the surrounding scenic nature and of course, the Baltic Sea.

The capital of Denmark, Copenhagen, is filled with canals, cobbled squares and copper spires. But don't let the historic appearance fool you. This is also Scandinavia's most cosmopolitan city. Certainly you can relive medieval times in The Latin Quarter, but you can also enjoy some of Europe's finest shopping, museums, cafes and night life prior to your cruise around the Baltic.

Prices are "from" per person based on double occupancy in an inside cabin. Balcony and other cabin categories available on request. Prices are based on current exchange rates and subject to change. Single rates available on request. Subject to availability, limited seats available, seasonal surcharges may apply. Government taxes, fees, port expenses, and fuel supplement (where applicable) are additional. Goway reserves the right to charge a fuel supplement without prior notice should the price increase above $65 USD per barrel on the NYMEX (New York Mercantile Exchange Index). In the event a fuel supplement is charged, Goway will have sole discretion to apply the supplementary charge. Such supplementary charges are not included in the cruise fare. The fuel supplement charge will not exceed $10.00 USD per passenger per day. Prices are based on availability and subject to change.

*Please note itinerary may slightly change depending on departure date.