Spend time in the Eternal City, then set sail and discover the Mediterranean’s most exciting cities aboard the Norwegian Epic. Immerse yourself in the history and culture of Italy, France and Spain. 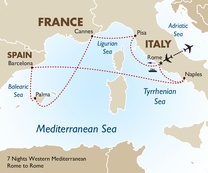 Enjoy 2 nights in Rome prior to an 8-day voyage aboard the Norwegian Epic will leave you with a love of both cruise vacations and the Mediterranean. Combine historic sights, enchanting villages, and world class cities, enjoying state of the art luxury and entertainment onboard in between ports.

Your departure port, Rome, is timeless, peerless, and endlessly rewarding. No tourist line can take away the magnificence of the Colosseum or Forum, or dull the cultural riches of the Vatican Museums. Of course, you can always just pull up a chair and an espresso and watch the sometimes chaotic street life race by, enjoying la dolce vita at your own pace.

Dock in Naples, on Italy’s Amalfi Coast. A famously gritty, authentic Italian city steeped in history and amazing food, this is perhaps the best cultural immersion you can have in central Italy. If you don’t mind rubbing shoulders with the tourists, spend your day visiting the fascinating nearby ruins of Pompeii. Otherwise, roam the intimate streets and piazzas of Naples, enjoying the centuries-old cathedrals, castles, and more. Oh, and be sure to have pizza for lunch, even if you don’t particularly like it at home.

A lesser known historic mystery awaits you in Cagliari, the capital of Sardinia. Thousands of stone dwellings known as nuraghi dot the island, bringing both mystery and intrigue to your Mediterranean cruise, before you spend a day at sea. Incidentally, the Norwegian Epic offers over 20 different dining options, plus some of the highest quality entertainment you’ll find on any ship, including two of Broadway’s hottest musicals. It’s also uniquely appealing for solo travellers, offering Studios designed (and priced) for one.

Time to dive into the beauty and treasures of Spain. Dock in Malaga, and head to Granada, one of the country’s most evocative and complex cities. Nowhere is this more evident than at The Alhambra, where the artisans were determined to fully utilise each surface as a canvass for exquisite decoration. Book tickets in advance if you’re planning to visit. Otherwise, simply enjoy the undeniable charm of Granada itself.

Sail on to Cartagena, a port that dates back to the Roman Empire. That legacy can be found right alongside modern-day resorts, creating a unique trip back in time for visitors, while still offering every modern convenience. Your next stop is Valencia, Spain’s third largest city and an architectural marvel that places great value on innovation and good living.

End your voyage in Barcelona, the capital of Catalonia, and one of the world’s most unique cities. Walk in the footsteps of Gaudi, Picasso, Dali, and countless others, or book a few extra days here to discover their legacy in detail. Perhaps visit the Picasso Museum to explore the master’s early work, or immerse yourself in the architectural genius of Modernisme, which gave Barcelona much of its distinctive character.

Depart North America for your overnight flight to Rome.

Today you will board your ship and begin your cruise of the beautiful Mediterranean.

How lucky to visit the Tuscan region, Florence &amp; Pisa, resplendent in art and history. What's even more fortunate is that all the main attractions in Florence are centrally located for the perfect walking tour. See Santa Croce, Piazza del Duomo and Michelangelo's David. Explore more of Florence &amp; Pisa on a European cruise!

Drive up Suquet Hill for a view of the city, sea and Lerins Island - fabulous dahling! How many rich and famous can you spot, walk the palm-lined promenade de la Croisette and count. The French Riviera at its best...the International Film Festival calls this home. Explore more of Cannes on a European cruise!

On the one hand, this city, founded by the Romans some 2,100 years ago, is replete with (literally) wall-to-wall history and architectural splendour. You can journey back in time and wander the mazes of alleyways and cobblestone paths that surround the Gothic cathedral. On the other hand, Palma is bustling with life, showcasing the island's best restaurants, shops, nightlife and a vibrant art scene. Explore more of Palma on a European cruise!

The capital of Catalonia, and one of its provinces, Barcelona, is a place of palpable history, where you can lose yourself strolling down the medieval streets of the Barri Gotic. It's a city designed to delight the senses: visit other-worldly Modernista churches like Gaudi's La Sagrada Familia, or treat yourself at a street side cafe to Patatas Bravas or a Passion Fruit Mojito. Explore more of Barcelona on a European cruise!

Today will be spent exploring all of the activities and restaurants aboard this beautiful vessel. Norwegian Epic keeps the bar high with quality Broadway shows. Not only is Norwegian Epic offering world-class performers but a new wave of accommodations as well - from Studios, designed and priced for the solo traveler, to the private Haven. Add more than 20 different dining options and you'll understand why this is Freestyle Cruising on a truly grand scale.

Cruise to Naples, located on Italy's stunning Amalfi coast, a city rich in history. A tour around Naples' grand piazzas, cathedrals and castles in the old centre will take you back centuries. Pompeii is not too far either, a dashing city which boasts diverse cultural offerings and charming streets. Explore more of Naples on a European cruise!

Endless adventures await in Rome. With two and a half thousand years of history, art and culture, it is no wonder Rome is one of the most visited cities on the planet. Gaze at the masterpieces of the Vatican or walk into the past with visits to ancient relics, historic monuments and legendary museums. Or people-watch while sipping on an espresso in a quaint cafe.

Rates are per person, based on availability, at time of booking and subject to change. Rates based on departure on September 27, 2020 for the above listed cities.  Listed flights may include at least 1 stop. Direct flights are available at a higher cost, based on availablity.  Airfares are based on the following:  Toronto and Vancouver with Air Canada, New York and Chicago with Iberian Airlines (Operated by American Airlines) and Chicago with Delta Airlines.  Airline taxes and fees are included and subject to change. Airfares used in the above pricing is subject to availability, and they have to be purchased by a certain date. As they are the cheapest airfares, they do include restrictions that include but are not limited to; no pre-seating, luggage costs at time of check-in and may not present the best flying time or routing. Please inquire for full details on above and chat with our experts on all available airfare options.