Experience a kaleidoscope of architectural styles on this journey through the Baltic capitals. Explore the medieval old town of Riga, tour the gateway city of Tallinn, admire world-class design in Helsinki, and crown your vacation with St. Petersburg, Russia’s imperial capital. 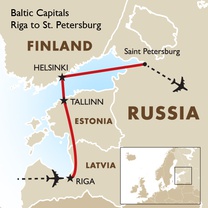 This 10-day Baltic vacation takes you through the capitals of the region, including Riga, Tallinn, Helsinki, and St. Petersburg.

Your Latvia vacation begins in Riga, the Latvian capital and largest capital in the Baltic. Riga is known for its medieval architecture and lively market life. Explore the Old Town to see Gothic spires and Art Nouveau facades as well as popular landmarks like Riga Castle, the Dome Cathedral, and the red brick Brother of Blackheads building. If you’re looking for excitement, head to Livu Square to find the city’s bets bars and nightclubs.

Continue your European vacation by venturing into Estonia, passing through the northern forests on route to Tallinn, a city that combines medieval history with modern eccentricity. Tallinn has garnered something of a reputation as the Baltic’s party capital, but its classical architecture remains one of the highpoints of a visit here. You’ll tour the Old Town of Vanalinn to see the Russian Orthodox Cathedral of Alexander Nevsky, Toompea Castle, and the domed Cathedral of St. Mary. While in town, you can also take advantage of the booming arts and crafts scene and indulge in the city’s famous nightlife. You’ll also have the opportunity to visit Kadriorg Park and Kumu, an art museum renowned for its collection of classic and contemporary artworks.

Before you leave Estonia, you’ll have the chance to head to Lahemaa National Park, where you can visit charming 16th Vihula Manor and tour the Vodka Museum. Continue your journey to Helsinki, which is ground zero for any Finland vacations. This Daughter of the Baltic is a popular getaway spot and one of the most charmingly-designed cities in Europe. A sightseeing tour will take you to many of the most famous sites in the historical centre, including the imposing red granite Parliament Building, impeccably-designed Finlandia Hall, and the Temppeliaukio or "Church of the Rock," which is carved entirely out of solid rock. You'll also have the freedom to take advantage of Helsinki's design district, where artisan shops and art galleries fill the lanes, or head to the Seurasaari Open-Air Museum to learn about traditional Finnish lifestyles and customs.

From Helsinki, pass over the border in Russia, stopping off at Vyborg Castle, on route to St. Petersburg, the nation's imperial heart. Moscow might have become the Russian capital in 1917 but St. Petersburg remains the nation's greatest artistic treasure. Built by Peter the Great in the early 18th century, this Baltic port is full of palaces and cathedrals that show off two centuries of Russian decadence. A city tour will introduce you to many of the best sites. You'll gasp at the towering golden spire of the cathedral inside Peter and Paul Fortress, stand in awe of the Winter Palace, and learn about the country's religious traditions at the Nevsky Convent. Close out your Russia vacation by visiting the Peterhof, Peter the Great's crowning achievement, as well as the State Hermitage, which houses the artistic wealth of the old empire.

Founded in 1201 by the German bishop Albert, Riga is the largest of the three Baltic capitals and boasts a real kaleidoscope of architectural styles. The walking tour of the Old Town includes Riga Castle, the Dome Cathedral, St. Peter's Church, the Swedish Gate, the Three Brothers, the Large and Small Guilds and the Freedom Monument.

The afternoon is reserved for an optional visit to Jurmala, the vibrant Latvian sea resort, famous for its wooden architecture and sandy beaches. In the evening, enjoy an optional Latvian dinner at the stylish Restaurant Forest.

The tour continues along the coastal highway to the Estonian summer resort of Parnu. You'll do a short tour of the resort before you continue through the North Estonian land of forests and arrive in Tallinn early afternoon, check-in at the Hotel Radisson Blu Olympia or similar.

Tallinn is a charming blend of medieval tranquillity and modern urban life. The medieval Old Town is a busy place in the summer with its many shops, galleries, souvenir markets, outdoor cafes and restaurants. The sightseeing tour takes you around the old medieval city walls and into the Old Town where you'll see Toompea Castle, Dome Church, Alexander Nevsky Cathedral, medieval Old Town Hall and Great Guild Hall.

In the afternoon, an optional excursion is offered to Kadriorg Park and visit to KUMU, the award-winning new Estonian art museum, with its collections of classic and contemporary fine art. The evening offers an optional medieval dinner at Restaurant Peppersack.

This day offers first an optional day excursion to Lahemaa National Park, where you can viisit Palmse Manor, a memorial to the von Pahlen family, and Sagadi Manor. The tour ends with a visit to the charming 16th century Vihula Manor and the Vodka Museum.

After lunch break, you'll head back to Tallinn to take the ferry to Helsinki and enjoy a refreshing tour through the Finnish archipelago before arriving in Helsinki. Upon arrival, you'll be transferred to the hotel and check-in at Hotel Glo Art or similar.

Helsinki is truly located at the crossroads of Western and Eastern culture and this is reflected everywhere in the green and lively Finnish capital. The sightseeing tour takes you around the harbours and the Senate Square with the Lutheran Cathedral, up central Mannerheim Street and by the Parliament Building, the Finlandia Hall, and the Sibelius Monument and for a visit at the famous Church-in-the-Rock.

The afternoon offers an optional excursion to the Suomenlinna Fortress, a cultural treasure which construction was started in the 18th century as a sea fortress. Located on an island, this fortress is a unique attraction for visitors.

Today, you'll continue eastbound to St. Petersburg. Shortly after crossing the border into Russia, you'll arrive in Vyborg, where you'll take time for a short sightseeing tour and a photo-stop at Vyborg Castle.

In the late afternoon, you'll arrive in St. Petersburg and check-in at Hotel Sokos Vasilievsky or similar.

St. Petersburg is an amazing city. Its imperial palaces and museums enjoy worldwide fame, while the Neva River and the many canals have deservedly given the city the title "The Venice of the North". During the morning sightseeing tour, you'll get acquainted with all the splendours of the city: the Peter-Paul Fortress, the Winter Palace, St. Isaac's Cathedral, the Church of the Bleeding Savior, the Nevsky Convent and much more.

The afternoon offers an optional excursion to Zarskoye Selo with the impressive Catherine's Palace and the Amber Room, which vanished during World War II and was restored for St. Petersburg's tri-centennial celebrations. In the evening, enjoy an optional visit to the Nikolaevsky Palace with an exciting Russian folklore show and Russian "champagne" and snacks.

The morning is reserved for an optional visit to Peterhof, an uncontested masterpiece of the time of Peter the Great, with the impressive Grand Palace, Grand Cascade and Water Avenue and its wonderful parks.

In the afternoon, an optional visit to the world-famous Hermitage Art Museum is offered. In the evening, enjoy an optional Russian dinner at Restaurant Pryanosti and Radosti.

Optional transfer to the airport.