FIRST-CLASS | CRUISE: The Elbe, a Central European river which rises in the Krkonose Mountains in the Czech Republic and traverses most of Germany before arriving at the North Sea. The Vltava is a major tributary that joins the Elbe north of Prague. This lovely 9-day trip between Berlin and Prague is on-board a river paddleboat that will be moored in Prague! 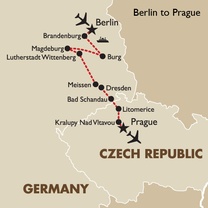 Start your one week cruise from Berlin joining your cruise ship in the evening. Overnight in Berlin. Berlin is the largest city in Germany and is best known for its historical associations as the German capital, internationalism and tolerance, lively nightlife, its many cafés, clubs, and bars, street art, and numerous museums, palaces, and other sites of historic interest. Berlin's architecture is quite varied.

The following morning, have a tour of the highlights of the city after which, head to Potsdam to visit the Sanssouci Palace, the former residence of Frederick the Great and Germany’s answer to Versailles. Return to the ship and cruise to Brandenburg via Pfaueninsel (Peacock Island), an island in the middle of the Havel River and which contains some historical buildings as well as being a nature reserve. Overnight in Brandenburg.

After a leisurely morning cruising down the river, arrive in the afternoon at Magdeburg on the Elbe River. Have a tour of Magdeburg which includes the Lutheran Cathedral of Saint Catherine and Saint Maurice, the tallest church in Eastern Germany. Later, return to the ship and sail on an overnight journey to Lutherstadt Wittenberg. Have a your of the city. This is where Martin Luther nailed Ninety-Five Theses to the door of a church and started the Reformation. You will see attractive renaissance-style houses and visit the Reformation Museum. Spend the afternoon and overnight cruising.

Arrive the next morning in Meissen famous for its excellent porcelain. During a tour of Meissen, you will learn how porcelain has been made for more than 300 years and visit the Albrechtsburg Castle which dominates the city and the Cathedral. Later, continue to Dresden, home to many Saxon princes and kings. Many buildings date from their reign and the rich art collections are definite testimony of their extreme wealth. The historical centre of Dresden was 75% destroyed by Allied bombing in 1945.The historical centre is nowadays largely restored to its former glory. Dresden is a very beautiful city.

The next morning, sail to Bad Schandau where you will go ashore on an excursion to the Elbe  Sandstone Mountains. Here you will find the Konigstein Fortress, one of the largest hilltop fortresses in Europe and the Bastei rock formation formed by water erosion over one million years ago. Return to the ship and continue sailing down the Elbe River through prairies, woods, lakes, vineyards and pass by chateaux.

The following morning, arrive in Litomerice in the Czech Republic, an old historic city established in the 10th Century. A tour will take you to the numerous gothic, baroque and renaissance buildings which abound here. The afternoon is spent cruising. Dock at Kralupy Nad where the following day, you will travel to Prague. Prague is the capital of the Czech Republic. This magical city of bridges, cathedrals, gold-tipped towers and church domes is mirrored on the surface of the swan-filled Vltava River. Almost undamaged by WWII, Prague's medieval centre remains a wonderful mixture of cobbled lanes, walled courtyards, cathedrals and countless church spires all in the shadow of its majestic 9th century castle. Spend the morning on a tour of Prague's Old Town. Stare Miasto which dates back more than 1,000 years and is one of the most important places in Bohemian history. Visit the Jewish Quarter, the town hall, the iconic astronomical clock, and the Church of Mother of God. Your ship will be waiting for you in Prague. In the afternoon, spend time in the Prague Castle area with its collection of palaces, churches, monasteries, and gardens overlooking the city. You will see Saint Vitus Cathedral, the most recognizable landmark in the city, Prague Castle, and Golden Lane.

The next morning, after breakfast, it’s time to disembark.

Passengers are welcome to board our ship in Berlin starting at 6:00 p.m. After comfortably settling into your cabins, we'll introduce our crew at a welcome cocktail. We'll enjoy dinner on board and remain in port overnight.

This morning, join us for an optional tour of Berlin. After our tour, we'll return on board and start cruising towards Nedlitz. You'll discover the idyllic charm of the lakes formed by the Havel River. In the afternoon, we'll leave on an optional visit to the gardens at the Sanssouci Palace. Afterwards, we'll return to the ship and begin to cruise to Wusterwitz. Enjoy an evening of entertainment.

Morning spent cruising towards Magdeburg. This afternoon, join us for an optional visit of Magdeburg, situated midway on the Elbe River and the historic Roman Roads. Afterwards, we'll return on board and continue our cruise. Evening of dancing.

Once we arrive in Wittenberg, we'll leave on an optional guided tour of the city, we'll also visit Luther's house, a former Augustinian monastery which is now the Reformation Museum and listed as a UNESCO World Heritage Site. Afterwards, we'll return on board and spend the afternoon cruising. Tonight will be CroisiEurope Quiz Night. Our ship will cruise through the night.

Once we arrive in Meissen, we'll leave on an optional guided tour of the city, famous for its trademark porcelain. We'll return on board in Dresden. After lunch, join us for an optional visit of the city known as the "Florence of the Elbe." Evening of dancing.

We'll leave on an optional excursion to the Elbe Sandstone Mountains. We'll discover the Konigstein Fortress, overlooking the Elbe and one of the largest hilltop fortresses in Europe. We'll then stop at the Bastei rock formation towering above the Elbe and formed by water erosion over one million years ago. The afternoon will be spent cruising. Enjoy an evening of entertainment.

Usti to Roudnice to Kralupy

This morning, join us for an optional tour of Litomerice. This royal town is one of the oldest Bohemian cities established in the 13th century and whose old town is listed as a World Heritage Site. We'll spend the afternoon cruising. Enjoy an evening of onboard entertainment.

We'll leave Kralupy to spend the morning on an optional tour of Prague's Old Town. We'll return on board in Prague. The afternoon will be spend on an optional visit of the Prague Castle area. We'll see Saint Vitus Cathedral, the most recognizable landmark in the city, the Prague Castle, and the Golden Lane. Tonight will be our gala evening and dinner.

Enjoy one last buffet breakfast on board before disembarking at 9:00 a.m. End of our services.

Prices are "from" per person based on twin/double share accommodation and for travel in low season. Seasonal surcharges and blackout dates may apply. Limited seat/spaces and all pricing is subject to change and availability. Rates for single or triple travellers are available on request - please enquire. Please note, due to COVID-19, all 2021 and 2022 itinerary's are subject to change without prior notice. Finalized itineraries will be confirmed no later than 3 weeks prior to departure.