FIRST-CLASS | TAILOR-MADE: Get off the beaten track and explore three incredible regions of Italy in three unique ways! Cycle your way through olive groves and vineyards of the Tuscan countryside, hike through the picturesque villages of Cinque Terre, and take a boat out onto Lake Maggiore near the bustling metropolis of Milan. 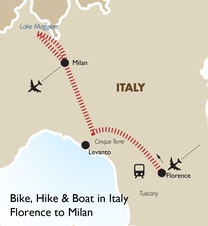 This is the original VESPA TOUR in Tuscany! Drive along scenic and silent country roads through the hillside of Tuscany on a Vespa admiring the sights, smells and sounds of the Chianti region! A comfortable minivan will take you to the countryside, and will be available in case of any need during all the tour. With a short ride, you will be taken just outside of the busy and bustling city center.

First, you will receive an orientation conducted by an English speaking trained professional, ensuring the safe operation of the Vespa's, including a driving test in an enclosed space to ensure everyone has enough confidence and safety on the Vespa to drive on open roads. The ride, along scenic country roads will offer splendid views of the rolling hillside, vineyards and olive groves, little medieval churches and ancient wineries. Some stops for photo opportunities will be made along the way. You will visit a famous winery, producing some of the most appreciated Chianti wines, and enjoy a guided tour of their cellars, where you will learn all the secrets of wine production. You will end the Vespa ride at a boutique winery, learning their approach on wine making ending then your memorable experience with a typical Tuscan lunch (or dinner, depending on which departure you choose) that will be served with a wine and olive oil tasting.

The Cusani Milano is a modern 4-star hotel is ideally situated between the Duomo and Castello Sforzesco, perfect for exploring Milan's historic center. Guests will enjoy its modern, spacious bedrooms and suites, renowned restaurant, meeting and business facilities and fully equipped fitness room. Other services the hotel offers are free WiFi, accessibility rooms and babysitting services.

On this small-group tour, you will leave cosmopolitan Milan behind for a day and head towards the beautiful Lake Como, framed by verdant mountains and crowned by the snow-peaked Alps.

Lake Como boasts an enchanting shoreline studded by sumptuous historical villas and dainty towns; rich in heritage and lively traditions, Lake Como is one of Italy's most idyllic spots and a retreat for tycoons and movie stars. Discover the most remarkable features of Lake Como including a guided walking tour of the elegant town as you stroll through the picturesque city center while admiring its historic landmarks.

Admire the Duomo and lovely Basilica di San Fedele and discover the fascinating local heritage before setting off on your unforgettable cruise. Soar across the lake's peaceful waters enjoying the soft breezes as you take in extraordinary views and admire the charming villages, gorgeous monumental period villas, thick woods and verdant hills. You will reach Bellagio and Varenna for the visit of two of the most charming and famous towns for a pleasant walk and free tastings of local products at small selected shop before heading back by boat to Como.

*On Day 5, the Cinque Terre hiking excursion starts from Manarola. Clients must make their own way to the meeting point by local train.