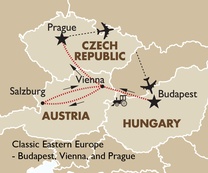 What is a Classic Independent Itinerary? SEE Goway Classic BELOW

This 11-day trip follows a classic route through Central Europe’s most beautiful cities, with side trips to the picturesque and historic towns that surround them.

Start in Budapest, a city built to govern a much larger country than Hungary is now. That grandeur is reflected everywhere, from the enormous Parliament building, to the Royal Castle, to Heroes Square. A three hour tour takes you to see the key sights, and includes a walk through the Castle District, from which you can enjoy magnificent city views from the Fisherman’s Bastion. Perhaps end your day with a soak at the opulent Gellert Baths, or down a few cocktails at one of Budapest’s famously ramshackle – but endlessly creative – ruin bars. Continue your exploration of the city’s artsy side on a Danube Bend tour to Visegrad, Estergom and Szentendre, including a cruise on the Danube.

Speed your way to majestic Vienna, where a coach and boat tour awaits to take you through the Vienna Woods. See the Danube Tower, the colourful Kunsthaus and Hundertwasserhaus, and the wine growing village of Grinzing. With your spare time, explore the palaces, museums and coffee houses that define the splendour of Vienna, and discover the capital of what was once one of Europe’s largest and most influential empires. A side trip takes you to Salzburg, Mozart’s birthplace, where you’ll embark on a tour through the city’s rich musical heritage. You might even see a few familiar sights from the beloved film The Sound of Music. With one last night in the city, why not put that musical inspiration to work with a night at the Vienna State Opera?

Spend your last few days based in one of Europe’s most unique and beautiful cities, Prague. Spared from the bombs of World War Two, the Czech capital evokes a seemingly lost Europe full of medieval charm and quirky innovations. A city tour takes you to Wenceslas Square, the Old Town and the historic Jewish Quarter. Then cross the river to the so-called Lesser Quarter before wandering through Prague Castle, home to incredible St Vitus Cathedral.

The following day, set out for Cesky Krumlov, the UNESCO-listed medieval town to the south of Prague. Visit the chateau and castle, the second largest in the Czech Republic. Finally, a more sombre day trip takes you to Terezin, the former defensive fortress that became a brutal concentration camp under the Nazis. Return to Prague for your departure, or spend an extra day or two in the romantic city of spires.

These operate virtually any day as they are a collection of our most popular independent travel ideas. Just like our independent suggestions, classics can be extended and modified to suit your own interests, time available and budget. As experts in customizing personalized itineraries we look forward to being of service.

Budapest Airport to Hotel in Budapest

With artist Jen Haranghy's frescoes and richly colourful stained-glass windows, the Radisson Blu Beke Hotel, Budapest welcomes guests to its downtown home. Built in 1913, the hotel features 247 superbly decorated rooms and suites, offering thoughtful amenities including Free high-speed, wireless Internet. Enjoy delicious fare at Olive's Restaurant and Zsolnay Cafe, both located on site. Flexible meeting facilities are also available. The hotel is superbly located in the heart of the city within easy reach of the business, cultural and shopping centres. The closest underground station is 'November Square' and the Nyugati pu(west) railway terminal is a five minute walk up the road. The building itself stands on one of Budapest's main shopping streets, which is also a busy thoroughfare. Rooms are large and a good standard. They are very comfortably furnished and pleasantly decorated with pale wood furniture, elegant pastel colours and large ceramic bathrooms.

Are you ready to discover Budapest? We are prepared to show you the Hungarian capital in 3 hours so get ready to engage by this city. The Heroes Square, the State Opera House, the Hungarian Parliament, the Royal Palace and the Citadel (photostop) cannot wait for you to see them. The buses are air-conditioned and they all have a live guided. During the Grand City Tour you will also go on a walk in the Castle District to enjoy its unique medieval atmosphere. The tour ends in the city center.

Take an excursion into Hungary's history on this popular Danube Bend full day trip. Traveling by air-conditioned coach, you'll visit the gorgeous old towns of Visegrad, Esztergom and Szentendre, enjoy a three-course lunch and take a River Danube cruise - a highlight of any trip to Hungary!

When the Best Western Premier Kaiserhof Wien was built in 1896 on the former "Glacis Grounds" it was ranked as one of the most modern viennese hotels of its day, offering such novel conveniences (for the time) as a guest elevator, central heating, electricity and water in all rooms. The hotel offers rich tradition, but also a quiet and central location close to the imperial heart of Vienna. The top quality service and loving attention to details lend the hotel a uniquely comfortable and relaxing ambience. The hotel is just a short walk away from numerous sights, such as the Vienna State Opera, the Hofburg, the magnificent Ringstrasse, Konzerthaus, and many more sightseeing places in Vienna.

This tour will give you an overall impression of the most significant sight of Vienna. Along the Ringstrasse you will see numerous magnificent buildings, such as the MAK, the State Opera House, the Museum of Fine Arts and the Natural History Museum, the cultural district the Museums Quartier, the former Habsburg winter residence, the Hofburg, the Parliament, the City Hall and the Burgtheater. The highlight of this tour will be a visit of the showrooms of Schonbrunn Palace. In this former summer residence of the Habsburg family lived e.g. Maria Theresia. The MAK shows applied and contemporary art in temporary exhibitions as well as in its unique permanent and study collections. On the way back to the opera you pass by the Belvedere Palace, the former summer residence of Prince Eugen.

Traveling to Mozart's town of birth you'll be enchanted by the beautiful Salzkammergut landscape with its mountains and lakes, and where the Emperor Franz Joseph and his family used to spend their holidays. Skirting the Lake Fuschl and Lake Wolfgang you will reach Salzburg, where you will have free time for lunch.

Discover Salzburg with an afternoon walking tour through the old city. Your guide will show you the most important sights of the old Bishop's Seat including the Cathedral, the Festival Hall, St Peter's Abbey Church and its graveyard (the tomb of Mozart's sister Nannerl). Among the busy shopping streets you'll see no. 9 Getreidegasse, where the famed Wolfgang Mozart was born and lived until he was 17 years old.

While passing through the gardens of Mirabell Palace you will see the statue of the Pegasus, the winged horse and perhaps here, the song 'Do-Re-Mi' from the movie Sound of Music will come to mind? On your return journey to Vienna, enjoy great views as your coach passes through Fortress Hohensalzburg, one of the largest medieval castles in Europe. Your tour concludes with a drop off at Vienna State Opera or your selected hotel.

Hotel Rott is situated in the very heart of Prague, just a few steps from the Old Town Square, the main historical point of the city. All essential sights and monuments are within a walking distance of the hotel: Wenceslas Square, Charles Bridge, Jewish town, Prague Castle with adjoining gardens and palaces of the Little Quarter. Hotel's location is convenient also for shopping: there are numerous large shops and shopping malls within an easy and short reach of the hotel.

Take an excursion to the place where the Nazi occupation during the Second World War resulted in a tragic chapter in the history of a town, and the catastrophic fate of many innocent victims. As Hitler transported tens of thousands of communal objects to Prague, their owners were rounded up and shipped first to a city built northwest of Prague in 1780 by Joseph II. Ironically, this city served as a fortress to protect Prague from invaders to the north. Joseph II named this village after his mother, Maria Teresia, calling it Terezin. You will be taken on a walking tour of the entire complex of the former Nazi ghetto and concentration camp. Entering through the famous arch, marked with the slogan, "Work Makes One Free", you will then be transported back in time with authentic personal memories, chilling experiences and other episode's from the fortresses grim history.

This is a combined, comprehensive city tour of Prague. You will see our capital city from many perspectives. We will start our walk tour at the Old Town, which includes a unique Jewish part. Then we expect a 20 minutes minibus tour through the downtown to the Prague Castle, followed by a walking tour and a short break for lunch. The walk tour continues along Nerudova Street, through the Lesser Town to the Charles Bridge, where we can enjoy a short Vltava river cruise on a boat. After the boat cruise we will cross the Charles Bridge and will go back to the Old Town where the tour will finish.

On this all-day excursion you will have a chance to admire the beautiful south Bohemian countryside, with its picturesque villages and many ponds. Cesky Krumlov is a city on the UNESCO heritage list. The unique urban complex, comprising three hundred historic houses and the National Castle and Chateau, the second largest after Prague Castle, draws many visitors every year and is rightly called the RENAISSANCE PEARL.

Not exactly what you are looking for? Let us know! We can customize this itinerary. This can also be done on a private basis (please enquire).