Classic Over the Channel: London & Paris

An unbeatable combination - Royal London and Romantic Paris. With hop-on, hop-off bus passes in each city, you can decide what to see. Added to this are two full day tours, one to Windsor, Stonehenge and Bath and the other to the Palace of Versailles. 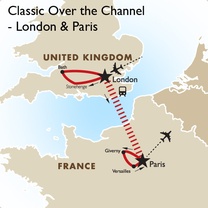 What is a Classic Independent Itinerary? SEE Goway Classic BELOW

Combine two of Europe’s greatest cities – London and Paris. Start with a 3 night stay in London. Design your own itinerary with a hop-on, hop-off bus tour operating 24 hours a day at regular intervals. First timers may want to focus on a few of the major sights such as the Tower of London, Westminster Abbey, the British Museum, Shakespeare’s Globe, the Tate Modern, or the Changing of the Guard to name a few. Just remember, the world also looks to London for the next ‘big thing’ in culture, entertainment, and food. Treat yourself to the West End’s latest hit musical or let one of the city’s many innovative restaurants do away with those outdated stereotypes about British cuisine.

Also included is a full day trip to Windsor Castle, Bath, and the mysterious and enigmatic Stonehenge. Pay your respects to royalty at Windsor, ponder the mysteries of the ancient pagans, at Stonehenge then wander the Georgian Streets and take in the Roman architecture of Bath.

Cross over the channel (Not included, but we can advise) to Paris and spend 3 more nights in the “City of Lights”.

Here you will have the advantage again of using the hop-on, hop-off bus tour with 50 stops on offer. You can include highlights of this wonderful destination such as the Eiffel tower, the Champs Elysees, the Arc de Triomphe, Notre Dame Cathedral, the Louvre Museum, the Left Bank (St. Germain des Pres) the Palais Royal, the original Paris Opera House featured in the “Phantom of the Opera” and perhaps some shopping at the Galeries Lafayette.

Your second full day is devoted to the splendid palaces and gardens of Versailles, the official residence of the Kings of France, Louis XIV, Louis XV and Louis XVI and their courts from 1682 to 1789. It is as much an icon of Paris as any attraction in the city. Receive a guided tour of the gardens, visiting the State Apartments and imagine the Palace during the reign of Louis XIV, the Sun King.

You have a free day next to continue your exploration of this very special city.

These operate virtually any day as they are a collection of our most popular independent travel ideas. Just like our independent suggestions, classics can be extended and modified to suit your own interests, time available and budget. As experts in customizing personalized itineraries we look forward to being of service.

The Phoenix Hotel is conveniently located in central London, 5-minutes away from Hyde Park and overlooking one of the capital's reputed Garden Squares. The hotel is also in the vicinity of local attractions such as Oxford Street and Regents Street, Hyde Park, Earls Court Exhibition Centre, London City Centre and the Knightsbridge. Here you are less than 5 miles from Bayswater Tube Station and 3 miles from London Eye and the Buckingham Palace. Strategically placed, the hotel is surrounded by bars and restaurants; and stores displaying some of the world's famous brands. The beautiful Kensington is less than a 20-minute walk away, while Knightsbridge is merely a mile away.

The Original London Sightseeing Tour (Hop On and Hop Off)

The Original London Sightseeing Tour provides more than just a great way to travel around London. Founded in 1951 it has now become established as the essential introduction to London. It is the only sightseeing tour to offer you total choice and flexibility. The Hop-on Hop-off service allows you to board any of our tour routes at over 80 different stops with a commentary in English or a wide choice of other languages. The Kids' Club provides an educational but fun alternative for 5-12 year olds. The services are frequent and reliable with tours running daily, every 15-20 minutes. The Original Tour allows you to experience all the magical sights and sounds of London in a comfortable and secure environment. Sit back, relax and take in the sights, sounds and iconic views of the city, both ancient and modern. The fantastic value 24-hour ticket offers a truly comprehensive London sightseeing experience: on foot, by boat and on board a marvellous fleet of London’s famous red buses.

Your day begins with a visit to one of the National Treasures. Built high above the River Thames, Windsor Castle has been home to the Royal Family for 900 years and is still an Official Residence of the Queen. Here you will visit the magnificent State Apartments, still used for State occasions and Royal receptions. Your next stop is clouded in mystery. The ancient stone circle of Stonehenge is an amazing feat of engineering and the most important prehistoric site in England, but beyond its archaeological significance and possible astronomical role, Stonehenge is also a place of spiritual importance. Early legends link it with Merlin and King Arthur, but over the last hundred years the midsummer sunrise has attracted pagan groups and followers of the Ancient Order of Druids. You will also visit the beautiful Georgian City of Bath and take you on a panoramic tour of some of the finest architectural sights in Europe, including Bath Abbey, the Royal Crescent, the Circus, Assembly Rooms and the famous Pulteney Bridge. Explore the Roman Baths, built around thermal springs, which have been supplying water for over 2,000 years. In Roman times a great Temple was built next to the sacred spring - the waters were believed to have healing properties and attracted visitors from across the Roman Empire.

Located in the 9th arrondissement, in the heart of one of Paris' best entertainment areas, the New hotel Opera offers pleasant accommodation and refined services, two minutes' walk from Mogador Theatre, the Opera Garnier, Paris Casino and many theatres, restaurants and cafes.

At the centre of the Opera district, symbolising the splendour of France's Second Empire, the hotel is also very close to Boulevard Hausmann, the Department Stores, the Louvre Museum and the Opera-Vendome-Madeleine golden triangle.
Its central location and its underground and bus service, makes it within easy reach of all the main tourist attractions in Paris.

Step aboard at the Eiffel Tower as the crew welcomes you for an hour-long cruise along the Seine on a trimaran from the Bateaux Parisiens fleet.

On this tour you will revel in the historical, cultural and artistic grandeur of France through two places highly symbolic of Impressionist style and Baroque architecture: Giverny and Versailles. Discover Claude Monet's house with its magnificent bright gardens, which were the Master's sources of inspiration. Your excursion continues on to Versailles Palace, the Sun King's emblem and one of the most important French artistic achievements of the 17th century. This program also includes lunch.