Explore the ancient home of the Ottoman Empire on this 8 day tour of captivating Turkey. Experience mesmerising Istanbul before heading to the capital, Ankara. Spend time in Cappadocia with its dwellings built into the rocks and Ephesus, one of the best preserved ancient Roman/Byzantine sites. 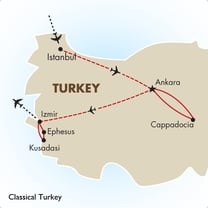 This 8 day journey through Turkey’s history includes Istanbul, plus two of the country’s most spectacular historic sights, Cappadocia and Ephesus.

Istanbul is a bustling city where continents collide and Roman, Christian and Muslim cultures have melted together for centuries. You’ll have lots of time to explore, but an included day excursion takes in many highlights including the Egyptian bazaar, a boat cruise along the Bosphorus, Topkapi Palace, and Suleymaniye Mosque, often said to be the city’s most magnificent. With a full extra day at leisure, visit the Hagia Sophia and the Blue Mosque if it’s your first time here, or spend the day wandering the ancient streets or haggling up a storm in the bazaars.

A short flight later, stop in Ankara on your way to Cappadocia. Stop at the Mausoleum of Ataturk to visit the founder of the Turkish Republic and learn how the modern nation was formed. Then visit the Museum of Anatolian Civilizations for a peak into Turkey’s past, all contained within a 15th century Ottoman bedesten.

The short-lived kingdom of Cappadocia rose to prominence under the rule of Ariarathes, an aristocrat from the recently fallen Persian Empire. His dynasty ended in 130BC, when Cappadocia’s alliance with Rome led its military forces to obliteration. Today, fascinating rock cut architecture and natural formations such as the Fairy Chimneys remain.

Your last stop is Ephesus, the Roman capital of Asia minor and one of the world’s most spectacular ruins. Originally home to the Temple of Artemis – one of the Seven Wonders of the Ancient World, destroyed in 401AD – it was also home to St Paul and the Virgin Mary for a time. The House of the Virgin on Mount Koressos is a popular place of pilgrimage for Catholics and Muslims.

Upon arrival to Istanbul, Turkey, you are met and escorted to your hotel. The remainder of the day is at leisure.

After breakfast, drive to old town and visit Hippodrome Square, the scene of Chariot races and the center of Byzantine civic life which was originally built by Roman Emperor Septimus in 203 AD. Then visit Blue Mosque, built in early 17th century and know as Blue Mosque because of its magnificent interior decoration with blue Iznik tiles. It is also unique in the world to have 6 minarets. Continue to St. Sophia Museum, built by Emperor Constantius is 360 AD. St. Sophia was for many centuries the world's largest church and today is the fourth largest one after St. Paul's in London, St. Peter's in Rome and Duomo in Milan. Throughout its Byzantine history, St. Sophia served as the cathedral of the city where emperors were crowned and victories celebrated. After his conquest of the city in 1453, Sultan Mehmet II ordered for the building to be converted into a mosque by the addition of Islamic elements such as a mihrab, a mimber, minarets etc. After having served this time as a mosque for 481 years, the building become a museum in 1934 by the order of Ataturk, the founder of the Repuplic of Turkey.

After lunch visit Topkapi Palace, built by Sultan Mehmet II after the conquest of Istanbul in 15th century. The palace housed the sultans and their exotic entourage until mid 19th century. The complex is a group of structures which incorporates works from successive periods of Ottoman reign. Today the museum displays priceless collections of the imperial treasury, numerous pieces of Chinese porcelain, traditional costumes of the sultans and their families and special section for the preservation of the relics of Prophet Mohammed.

Your last stop will be at famous historical Grand Bazaar, the largest "souk" covered oriental shopping mall in the world, where you will find 4,400 shops under one roof where each trade has its own street. There is a wide selection of leather, jewelry, antiques, copperware, souvenirs, and famous hand-made Turkish carpets displayed in this historical shopping center.

Istanbul to Ankara and Cappadocia

Early morning transfer to Istanbul airport for flight to Ankara. Start with a visit to Mausoleum of Ataturk, founder of the Turkish Republic. Completed in 1953, it is an impressive fusion of ancient and modern architectural ideas and remains unsurpassed as an accomplishment of modern Turkish architecture. There is a museum housing writings, letters and items belonging to Ataturk as well as an exhibition of photographs recording important moments in his life and the establishment of the republic. An important exhibition of the War of Liberation is also open to the public.

Then visit, The Museum of Anatolian Civilizations, close to the citadel gate, a 15th century Ottoman bedesten has been beautifully restored and since 1921 it houses a marvelous and unique collection including Paleolithic, Neolithic, Chalcolithic, Hatti, Hittite, Phrygian, Lydian, Urartian and Roman works. In 1997 this great museum won the "European Museum of the Year" award among 65 museums from 21 European countries.

After lunch, drive to Cappadocia for dinner and overnight.

After breakfast, start the visits with Goreme Valley museum consists of steep cliffs and many hidden churches dating from second half of 9th C. Then visit Pasabag in Cappadocia is located on the road coming from Goreme. Highly remarkable earth pillars can be seen here, in the middle of a vineyard, hence the name of the place which means: the Pacha's vineyard. Pacha means "General", the military rank, in Turkish and it is a very common nick name. This site is also called Monks Valley. The name was derived from some cones carved in tuff stones which stand apart. Currently, there is a vineyard and a number of tuff cones standing right next to the road.

Continue to visit the villages of Avanos, is a small town famous for its pottery. It is built along the banks of Kizilirmak (Hayls River), the longest river originated and ending within the borders of Turkey; 842 miles. Those who want may enjoy famous "testi kebab". After lunch, visit traditional pottery making house where guests will see their own talents in producing their own potteries.

Then continue to visit one of the underground city made to accommodate several thousands of people with seven subterranean floors. So far 36 underground cities have been discovered some of them being very recent. It is also estimated that most of them are connected to each other. But it is difficult to identify these connections.

After lunch visit Cavusin village, a Greek town whose history goes back to the Early Christian Period. The rock cut buildings have collapsed because of erosion but the churches are still in place and being used as dovecotes.

Morning drive to Kayseri airport for flight to Izmir via Istanbul.

On arrival Izmir airport, transfer to hotel for overnight.

After breakfast, drive to visit Ephesus, the Roman capital of Asia minor which remains to be the best preserved ancient city in the world. During the golden age of the Roman Empire (2nd century AD), Ephesus was an important commercial and cultural center. The protector of the city was Artemis, the Goddess whose temple was one of the "Seven Wonders of the Ancient World". The Ephesians still worshipped Artemis when St. Paul came to the city to win converts. St. John brought Virgin Mary to Ephesus after the death of Jesus Christ and she lived until the age of 101 in a small house built for her on Mt. Koressos. Now, the popular place of pilgrimage for Catholics and Muslims, the house received the official sanction of the Vatican and a commemoration ceremony is held every year on August 15th. The third church council in 431 was held in the Basilica of Virgin Mary in Ephesus.

Continue to visit, the House of the Virgin where it's believed that she passed last years of her life and died. She came to Ephesus together with St.John and taken up to Panaghia Kapulu Mountain to survive the Roman persecutions. The House was destroyed by many earthquakes and not discovered until 1951 thanks to a German Nun Catherine Emmerich who saw its location in her visions. It is recognized as a shrine by Vatican. Now the House of Virgin Mary is renovated by George Quatman Foundation from Ohio and serves as a small church which attracts many Christians as well as Muslims coming to pray for her.

Today's last stop will be the Basilica of St. John which was built in 6th century. The building was in the shape of a cross and was covered by 6 domes. Under the central dome was the tomb of St. John; that has a marble marker today. When Christianity became the state religion, the crowds who once flocked to the Temple of Diana turned their attention to this cathedral.

After breakfast, transfer to Izmir airport for a flight to Istanbul. Your tour ends.

Enjoy your onward departure flight or the remainder of your stay in Turkey.