FIRST-CLASS | SMALL-GROUP: Commencing from Croatia’s fascinating capital, Zagreb, visit the wonders of Croatia including the Roman sites in Opatija, Plitvice Lakes with their magnificent waterfalls, Split with its Roman walls, historical Trogir and Dubrovnik with its excellent beaches and medieval old town. 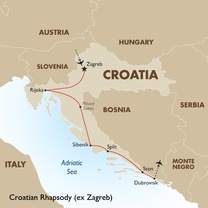 This 9-day group tour, on set departure dates and staying in 3 and 4 star accommodations travels through one of the most beautiful countries in the Balkan region starts in Zagreb, and passes through ancient port cities on its way to Dubrovnik.

As the capital city, Zagreb is Croatia’s centre of culture, innovation, and opportunity. Yet despite comparisons to picturesque neighbours such as Ljubljana, Budapest, or even Vienna, it’s often bypassed by travellers making a beeline for the coast. A city tour shows you what they’re missing before you depart for Kvarner Bay. A luxurious soak in the local spas will transport you back to the age of the Habsburgs, and ready you for a day exploring the Istrian Peninsula. A 2000 year old Roman Colosseum immerses you in history at Pula. Then take some time to roam Livade, and Rovinj, the Peninsula’s most beautiful town.

After overnighting in Opatija, go on to the Plitvice Lakes, a UNESCO World Heritage site where 16 lakes are connected by glorious waterfalls. You’ll have half a day to explore the park, including a boat ride across Kozjak Lake. After a day exploring these natural wonders, your adventure continues in Sibenik, which contains a magnificent medieval cathedral and is close to Bibich Winery. You will of course enjoy a tasting before reaching Split, another World Heritage Site and one of the most popular destinations in on the Adriatic coast.

Split’s architecture dates back to the Roman era, so this coastal gem has much to be proud of. The centrepiece however is the Diocletian Palace. The ancient city of Trogir will be another highlight of your day. Showing off Roman, Venetian, and Greek influences, it’s sometimes referred to as the floating museum town.

You’ve almost reached the fabled city of Dubrovnik, but before you do, the town of Ston will enchant anyone who’s acquired a taste for Croatian wine. Plavac Mali is a close relative of Zinfandel, with a history dating back centuries. Arriving at your final destination, few ancient cities on the Mediterranean are as well preserved as Dubrovnik. Take a full day to explore. This renowned walled city is known for its delightful, labyrinthine old town, which contains a highly appetising restaurant and bar scene.

Upon arrival in Zagreb, you will be met at the airport and transfer to the hotel (driving time 20 to 45 min). You will have a welcome drink and group get together. Take time to acquaint yourself with your tour manager and others over a plate of Strukli, a local specialty in the Zagreb area.

After breakfast, enjoy a walking tour of Zagreb with an English speaking guide. In the fortified, medieval Upper Town, you will visit St. Mark's church, with its multicolor tiled roof, Parliament, the government palace, and many fine old buildings. After the sightseeing we proceed to Opatija (driving time 2.5hrs), situated on the picturesque Kvarner Bay. This used to be the favorite spa resort of the Habsburgs and the European aristocracy, including famous personalities such as Mahler, Chekhov and Isadora Duncan. Dinner and overnight in Opatija.

Today it is time to get to know the Istrian peninsula and visit the 2000 year old roman Colosseum located in Pula. Afterwards we will relax in Rovinj, perhaps the most beautiful city in Istria and the inspiration of many artists. Time at leisure in Rovinj and departure towards Livade for a sample of one the Istrian tastiest treasures, the truffle (touring from 9am to 6pm). Dinner and overnight in Opatija.

The Plitvice Lakes is one of the most beautiful and oldest national park in Croatia under UNESCO protection, consisted of 16 lakes connected by magnificent waterfalls. The park is located in Lika mountain region and visited mostly on foot - however the entrance includes a boat ride across the Emerald Green Lake "Kozjak" and a train ride back to the main entrance. The visit of the park grounds takes approximately 3 hours. Dinner at the hotel restaurant and overnight in Plitvice area. (total driving time approx. 3hr)

Plitvice Lakes to Zadar to Split

After breakfast at the hotel, we drive down from the mountain region of Lika via the coast towards the city of Zadar. The historic town of Zadar is rich in cultural and historical monuments. Here you can see The Roman forum dated to the 1st century AD, the church of St. Donatus dated to the 9th century AD. Of special interest are the famous Zadar Sea Organs, one of a kindin the world. From Zadar we continue to the Bibich Winery for a gourmet experience that is more than a simple wine tasting. The winery burnt to the ground during the war is now producing rewarded wines and exporting 80% of their production to USA &amp; Scandinavia. We will taste the Dalmatian Debit white wine and Cuvee of Shiraz &amp; Merlot, accompanied with delicious Croatian style Tapas. Departure towards Split for overnight. (Total driving time 4-5h)

Today's Split is the handiwork of seventeen centuries of men and women building and remodeling, adding, tearing down and touching up, so that 18th century houses intersect with ancient Roman walls and fourth century chambers house twentieth century apartments. At the core of this sprawling cityscape is the palace the Emperor Diocletian built for his golden years at the turn of the fourth century. Today's lunch will be the traditional Dalmatian dish - Pasticada which we will taste at the Tragos restaurant in Trogir. The town of Trogir, a UNESCO site, has a fascinating 2300 years of continuous urban tradition. Its rich culture was created under the influence of old Greeks, Romans, and Venetians. Trogir has a high concentration of palaces, churches, and towers, as well as a fortresses on a small island. Sometimes referred to as the floating museum town.

Split to Ston to Dubrovnik

On our way to Dubrovnik we will stop near the town of Ston, where we visit a local winery and taste the famous "Plavac Mali" wine, a very close relative to the Zinfandel. In this winery the traditional wine making business has been passed on for generations, offering a unique story everyone wants to hear. The wine tasting includes a wine presentation on all the specifics of the wine-making process, wine tasting and snack. Arrival in Dubrovnik and overnight. (total driving time approx. 5hr)

Completed in the thirteen century, the old city Dubrovnik has remained basically unchanged since. Its medieval ramparts encircle the city which pedestrians can enter through one of two gates - either way, they cross a stone bridge under the watchful gaze of the city's patron Saint Blaise (Vlaho), to find themselves joining the evening promenade down the broad, stone-paved avenue known as Stradun. After the sightseeing free time to explore the city on your own. Overnight in Dubrovnik.

After breakfast your trip ends. Individual transfers to the airport are included, or you have the choice of optional excursions, cruises and hotel stay.

** The final name of your hotel will be confirmed 5 days prior to arrival.**