From Split to Dubrovnik, this Croatia tour takes you to the sparkling Adriatic’s most beautiful stops, where streets soaked in history bump against the beautiful waters of the Mediterranean. 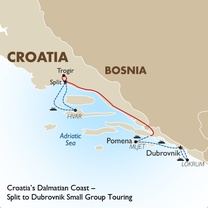 This 8-day Croatia small group adventure takes you between two of the country’s most beautiful and historic cities, staying in local accommodations, encompassing the best of Croatia’s islands along the way.

Start in UNESCO World Heritage listed Split, where a tour takes you through the 3rd century palace of Roman emperor Diocletian. You’ll see the famous palace gates, the sculpture of the priest who first defied the pope to give mass in Croatian, and the Cathedral of Saint Domnius.

Cast off for the island of Hvar, noted for its sweeping fields of lavender, heather and rosemary. Enjoy a walk of Stari Grad, and the village of Jelsa, thought by many to be typical of an old style Dalmatian village. Wander the vineyards and olive groves, and explore the town of Vrboska. Your next stop is the island of Mljet, one of the most beautiful, and greenest islands in the Adriatic. Half of Mljet is national park, so enjoy canoeing, walking, and cycling in between exploring 12th century monasteries.

Your final stop, Dubrovnik, is perhaps Croatia’s most famous city, and with good reason. The walled city is small but filled with ancient streets, a Franciscan monastery, cafes, bars, and of course the famous City Walls. A short boat ride away, you’ll visit Lokrum, just off the coast of Dubrovnik’s old town. Affectionately called a botanical garden, Lokrum also boasts gorgeous beaches and a Napoleonic fortress. Take your remaining time to explore Dubrovnik at leisure before you depart.

Your trip starts today with your arrival in Split, the second largest city in Croatia, located right on the Adriatic coast. You can arrive at any time during the day as there are no activities planned until the important group meeting in the evening. If you arrive early why not head out and get a first taste of this magnificent city. After the meeting head out for a dinner with the group.

Special Information:
An arrival transfer from Split Airport is included in the price of this trip. Please advise your travel agent of your flight details at the time of booking. Your adventure begins with a welcome meeting at 6:00pm. Meet your leader and group, and have your essential details such as passport number and insurance details ready for collection. If you're going to be late, please inform hotel reception.

This morning you will embark on a sightseeing tour of Split with a local guide. The city dates back 1,800 years, to the time when the Roman emperor Diocletian built a monumental imperial residence for his retirement. Today this fortified camp is an intriguing warren of narrow cobblestone streets where pre-Romanesque churches exist alongside Gothic chapels and a multitude of museums. You will also visit Diocletian's Palace, which was built in 295 AD and constitutes the heart of the city. Very much a living monument, it is framed by four gates, the most famous of which is the Golden Gate. In front of it stands a statue of the 10th-century bishop Grgur Ninski, who once opposed the pope and introduced the Croatian language into his services. In the afternoon you will visit Kastel Luksic's 16th-century castle and take a drive to the town of Trogir. Enjoy some free time to explore this quaint seaside town. Visit the cathedral where you can see the famous monument (a 13th-century portal of Dalmatian masonry) before returning to Split in the evening.

Enjoy a free morning in gorgeous Split before boarding an afternoon ferry for our ride to Croatia's most remote island -- Lastovo. The 4-hour journey is worth it to reach this secluded slice of paradise. Being so remote the island is still undiscovered by mainstream tourism, and it has a unique local flair to it. The whole island is a nature park and as such protected from over-exploitation. This means that the locals didn't develop the mass tourism infrastructure as seen on other islands and for that reason, most of the locals moved away, and the island's population is slowly dying out. However, this makes it the last authentic Adriatic Island that preserved the life as it once was in the whole region. We support the locals who have decided to stay there. Transfer to your guesthouse and enjoy an included dinner with your group, looking over the tiny bay.

Today you'll learn the local trade with an immersive fishing experience -- early start included. Rise and shine to head out with a local fisherman and his crew, helping to bring in the days' catch, usually scorpion fish, mackerel, sardine and bream. Enjoy the fishy fruits of your labour with a seafood lunch freshly prepared on board. Make sure you ask the captain any questions you may have. Return to Lastovo and enjoy the rest of the day as you see fit. Perhaps relax on the beach or explore the peace and quiet of the stone waterfront and small port of this unique island lost in time.

Bid farewell to Lastovo and transfer back to the port of Ubli, where you will board the mid-morning ferry bound for the island of Korcula (approximately 1.5 hours). Disembark at Vela Luka and transfer to Korcula Town, stopping en route at Blato, a little-known interior town on the island. Enjoy some time to explore a town many tourists never see and enjoy an optional lunch before continuing. Arrive in Korcula Town and get acquainted with this fortified, seaside city on an orientation walk. Enjoy a free evening in this stunning city. Perhaps wander through the narrow streets of the Old Town, taking in the stocky Revelin Tower and impressive defensive walls before stopping for dinner in one of the many restaurants.

Take an early-morning ferry to Dubrovnik (approximately 2.5 hours) where you'll be transferred to your hotel. Once settled in, you will embark on a half-day sightseeing tour of the fantastic Stari Grad (Dubrovnik's compact Old Town) with your leader. This walled treasure is often referred to as the 'pearl of the Adriatic' and is surprisingly tiny (400 m by 600 m within its protective walls). It's a lovely city to walk around, as it's been restored to its former glory since the damages of the 1991 conflicts. On your tour you will visit the Franciscan monastery, the Rector's Palace and take a walk along the City Walls. The remainder of the afternoon and evening is free for you to walk around at leisure.

Travel by boat to the island of Lokrum. It's located off the coast of Dubrovnik's old town. In this quasi 'botanical garden' you'll encounter a collection of exotic Mediterranean plants. Lokrum is also strewn with many golden sandy beaches that are popular with the locals. You will visit the ruins of an old Benedictine monastery and enjoy great views back across to Dubrovnik as well as Napoleon's fortress. Return by boat to Dubrovnik at around lunchtime. At this point, the afternoon is yours to spend as you please. In the evening you will enjoy dinner with your group to bid them farewell.

Your trip ends after breakfast this morning.