DELUXE | PRIVATE-GUIDED: Spend 8 days visiting Paris and the region of Alsace. In Paris, enjoy a private tour of Montmartre, the Eiffel Tower, and Versailles. Then, cruise the Seine and see the Louvre Museum after hours for a wine tasting. Finally, head to Strasbourg, explore its old town and discover its Germanic roots. 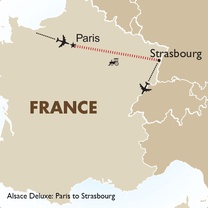 This 8-day French vacation takes you to Paris and Strasbourg to explore French history and culture. It features first-class accommodations, a mix of private and small group tours, and is ideal for first-time visitors to France.

Your journey begins in Paris, the City of Light and the one of the most beloved spots on the planet. Delve into the heart of Bohemian Paris with a tour through Montmartre, ending with a visit to Sacre-Coeur. Then swing over the Eiffel Tower to ride to the second level to enjoy magnificent views over the city and then board a cruise vessel for a one-hour cruise along the Seine. The next day, head just outside of Paris for a private morning tour of the Palace of Versailles. Tour the opulent former home of the Sun King Louis XIV and explore the manor apartments, Hall of Mirrors, and landscaped grounds. Another day, head to the Louvre after most tourists have left for the day and enjoy a tour by night. See masterworks like the Mona Lisa and the Venus de Milo without the crowds and enjoy a wine tasting as you do so.

Head to the train station and ride the train to Strasbourg, the French city near the border with Germany. A two-hour private tour of the old town will introduce you to the unique culture of Strasbourg and showcase landmarks such as the Maison Kammerzell, the Place Gutenberg, St. Thomas Church, and the Palais Rohan. While based in Strasbourg, you’ll also head on a private tour of the surrounding landscape of Alsace. Discover one of France’s most beautiful pastoral lands and visit the town of Colmar, Haut-Koenisbourg Castle, and several villages along the wine route.

At the end of your stay in Strasbourg, you’ll head to the train station to connect to your next destination.

Located just steps to the Eiffel Tower, Champ de Mars and Les Invalides, hotel Le Walt invites its guests to explore the 7th district of Paris on Seine's left bank. This 4-star boutique hotel is within easy reach to many of the city's museums, such as Le Musee Rodin, L'Hotel National des Invalides, Le Musee d'Histoire Contemporaine or Le Musee du quai Branly. The hotel is a unique getaway to an art lovers' paradise, with paintings and canvases all around. The hotel facilities include a breakfast room, bar, lounge area and patio. All rooms are elegantly designed including modern amenities.

Paris Must Eiffel Tower plus Cruise

Stroll on your own through the narrow streets of Montmartre to discover the Basilica of the Sacred Heart of Paris as well as the artists and portrait painters of Place du Tertre. Next, the driver-guide will take you to the Eiffel Tower, up to the 2nd level with its unique and marvelous panorama. Your excursion ends with a one hour Seine river cruise to admire the monuments from another point of view. Entrance tickets included.

Leave your Paris accommodation at 8 a.m. for a minibus journey to Versailles; arrival scheduled for around 9 a.m. The number of participants is limited to a maximum of eight to allow you to enjoy a tailor-made excursion with your driver-guide.

One of the most famous historic monuments in the world, the Palace of Versailles was the official residence of the Kings of France Louis XIV, Louis XV and Louis XVI and their courts from 1682 to 1789. Your guide will show you the majestic Palace of Versailles, a symbol of the king's power. Its Baroque architecture, sumptuous decoration, works of art, and furniture were all created by the greatest artisans of the age. After touring the palace, explore the magic of its formal gardens and exceptionally beautiful grounds.

The Palace of Versailles has more than 700 rooms and stretches for over 721,000 square feet. Follow your guide straight to the front of the line to visit the palace's most beautiful rooms: the King's Grand Apartments, with seven rooms dedicated to different gods (Apollo, Mars, Mercy, Venus, etc.), and the Queen's Grand Apartments, mirroring those of the king, which include the Coronation Room and the Queen's Bedroom, once occupied by Marie Antoinette, among others. Also, admire the grandeur of the Versailles Hall of Mirrors, a unique room in which guests were received and impressed, designed by the famous architect Jules Hardouin-Mansart. Almost 240 feet-long, it was created to dazzle visitors to the Sun King, Louis XIV; it is lit by 17 windows and some 350 mirrors, and overlooks the palace's breath-taking gardens, the second part of your visit.

In 1661, Louis XIV commissioned the landscape architect André Le Nôtre to lay out the grounds and gardens, something that was just as important to the king as the construction of the palace itself. Enjoy your free time strolling through the Gardens of Versailles and admire the 386 works of art (including more than 200 statues), fountains, flower beds, ponds, and trees. During the Summer months, a range of activities are organized, such as the Grandes Eaux Musicales, when the fountains are made to dance to music.

You will return to your Paris accommodation at approximately 12 noon.

When most tourists have finished their sightseeing for the day - the Louvre remains open to those few travellers who are in the know and looking for a unique and less-crowded way to experience its wonders.

After your tour of the Louvre, you will be escorted to a beautiful 18th-century Parisian mansion or wine bar just a short walk away, where you will be able to visit a spectacular wine cellar and enjoy a flight of wine (3 glasses selected especially for your group) and a buffet of typical French cheeses and charcuterie. An expert sommelier is on hand to provide information about the wines and the food, and your guide will be happy to provide information about the beautiful building and its history as well the original vaulted wine cellars, still used for storing wine today.

This stylish hotel combines noble materials and contemporary facilities. Enjoy luxury and quietness in the heart of the old town. Hotel &amp; Spa RÉGENT PETITE FRANCE is the ideal venue for both business and leisure travellers. All the rooms overlook either the old town or the canals and they feature designer furniture. In addition to a personalized service, it is possible to take advantage of the sauna, the bar and the restaurant . A cosy and warm place to stay while enjoying Strasbourg Guests should note that local city tax is not included in the rate booked. This will be charged directly to guests by the hotel and payable at check in.

Enjoy your 2 hour private walking tour around the old pedestrian areas around the Cathedral and in Petite France. It should be possible to see the Maison Kammerzell, place Gutenberg, St. Thomas church, the former tanners' houses, the Covered Bridges, the Vauban dam, the former customs-house, the former town-butchery, and the Palais Rohan. Entrances and tastings fees are not included.

On this small group excursion, you will discover why Alsace is without a doubt one of the most beautiful regions of France. This tour was designed so that you may have the opportunity to discover the most significant sights of the region. The visits include the lovely town of Colmar, small villages that line the wine route, thrilling Riquewihr and the fascinating Haut-Koenigsbourg castle. After the visit return to Strasbourg. Entrances and tastings are not included.