DELUXE | PRIVATE-GUIDED: Discover the flavours of France on this wine and food tour through three key regions. Visiting Lyon, Burgundy, and Champagne, you’ll tour celebrated food makers, taste world-renowned wine vintages, and explore some of the loveliest cities and pastures in Western Europe. 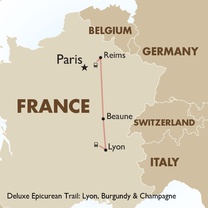 This 10-day French vacation takes you to Lyon, Burgundy, and Champagne to discover France’s bounty of food and wine. It’s perfect for wine aficionados. It features first-class accommodations and a mix of private and small-group tours.

Your trip to France begins in Lyon, one of France’s cultural centres, as renowned for its Roman ruins as its exceptional food scene. A private guide will help you unlock the city’s culinary history on a walking food tour. Learn how pralines are made, enjoy a chocolate tasting, and visit Paul Bocuse Market, the city’s centre of gastronomy. The following day, head into the Beaujolais wine region to tour ochre-coloured medieval towns, stunning castles, and family-run wineries, where you’ll sample local vintages and learn about the regional terroir.

Bid adieu to Lyon and ride the train to Beaune, the unofficial capital of the Cote d’Or and one of Burgundy’s fortified medieval cities. Explore the city on a private walking tour, visiting the 15th-century hospital-turned-museum of Hospices de Beaune and enjoying a wine tasting at tour’s conclusion. Follow the Route des Grands Crus to discover the wonderful vineyards of the Cote de Beaune, famous for the Golden Triangle of Great White Wines. You’ll spend the whole day at celebrated wineries tasting local vintages.

From Beaune, ride the train to Reims, one of France’s most impressive cities in terms of architecture and the gateway to the Champagne wine region. Spend a day on a group tour through the Champagne region, tasting delicious bubbly and learning about the history of this renowned sparkling wine. You’ll tour Champagne Avenue in Epernay, the unofficial capital of Champagne, visit Moet et Chandon, the makers of Dom Perignon, visit the church where the renowned monk Dom Perignon is buried, and enjoy tastings throughout the day. The next day, ride a wooden cruise vessel from the 1920s as you float down the Marne River. Enjoy unique views of the wine region from the water as you sip champagne.

At the end of your stay, you’ll connect to the train station in Reims for onward travels.

Upon arrival in Lyon at the main train station, meet your driver and be transferred to your hotel in Lyon. The remainder of the day is at your leisure.

This gourmet tour passes through Lyon's most emblematic neighborhoods with stops to taste local specialties. Meet your guide by the Saint-Jean Cathedral. He is a specialist in culinary history, who will show you around the charming historical Lyon and point out the admirable traboules, sheltered medieval passageways. The first gourmet stop is at one of the best pastry shops in Lyon, where you will learn about how pralines are made. Of course, you'll get to taste them too! The popular pink sugar-coated almonds are a perfect dessert on their own but are also the base of a number of praline-based treats.

The tour continues on the other side of the Saône River, where the Bourgeoisie settled from the 17th century. The Presqu'île district has seemingly countless bouchons, traditional bistros found only in Lyon. Learn the history of the Mères Lyonnaises, or the mothers of Lyon, 19th-century middle-class women who worked outside their homes as cooks. They created brand new culinary traditions incorporating regional cooking.

A stop at one of the famous Chocolats Voisin stores to taste Coussin de Lyon is a must! This unique chocolate and marzipan dessert is shaped like the cushions used by Lyon's silk weavers. It has been a symbol of Lyon since the 1960s. Finally, visit the indoor Paul Bocuse Market, in the modern Part-Dieu district. This is the center of Lyon gastronomy that brings all of the region's fine products under one roof: charcuterie, cheese, quenelles, chocolate, wines, and much more. Products change based on seasonal availability, but no matter when you visit, it is a gourmet pleasure. Your tour ends at the "Halles Paul Bocuse".

At 9:00 am, your small group tour leaves Place Bellecour in Lyon to explore Beaujolais, considered France's prettiest wine region, and discover the unknown beauty of the Golden Stones Country. Cross several quaint medieval towns built in ochre-colored stones and see majestic castles. Visit the lovely picturesque village of Oingt and enjoy panoramic views of stunning landscapes with rolling hills dotted with vineyards. Then, get to know a family-owned winery and immerse yourself in their history, "terroir" and tradition, meeting the winemaker himself. Enjoy a private vineyards inspection, learn about the wine-making process as you taste several Beaujolais wines in a friendly atmosphere.

Stop for lunch in a Beaujolais restaurant serving typical Beaujolais regional cuisine (lunch not included). In the afternoon, discover the medieval town of Pérouges, a "must-see" attraction, also the set of the popular 3 Musketeers film! Walk along cobblestone streets and appreciate the architecture of ancient houses from the XIII to the XVI century. Learn about French history as you discover this unique part of France.

Say goodbye to the Bordeaux and take a private transfer to the train station to your onwards journey in France or beyond.

Upon arrival in Beaune at the main train station, meet your driver and be transferred to your hotel in Beaune. The remainder of the day is at your leisure.

With your private guide, you will visit Beaune, the fortified city located in the heart of the Burgundy wine region. The city of cobbled streets is famous for its annual wine auction held in the Hospices de Beaune. Recognizable by its roof of geometrically colored tiles, this former 15th-century hospital has now become the Hôtel-Dieu museum and exhibits masterpieces such as Rogier van der Weyden's Last Judgment.

From the Place de la Halle and its famous Hôtel Dieu, your guide will tell you the great and small history of Beaune, passing through the Basilique Collégiale Notre Dame and the Hôtel des Ducs. The visit continues with a visit to the cellar and a wine tasting, in the purest Burgundian tradition!

While Burgundy is well known for its Dijon mustard and Anise of Flavigny candies, above all, it is its vineyards and exceptional wines that shine! Your guide is a local wine expert eager to share the secret of the region's wine and terroir with you. You will follow the "Route des Grands Crus" and explore the Côte de Beaune vineyards. The region's famous appellations include Pommard and the Golden Triangle of Burgundy's Great White Wines: Meursault, Puligny-Montrachet, and Chassagne-Montrachet. You will taste a selection of these at a private tasting in local wineries. Later by the Corton hillside, a unique location in Burgundy for red and white Grands crus, you will sample elegant pinot noirs and unoaked white wines.

In the afternoon, relax in the vineyard and enjoy a prestigious tasting in a renowned estate: the elegance of Pinots Noirs and white wines without wood.

Say goodbye to the Beaune and take a private transfer to the train station to your onwards journey in France or beyond.

Upon arrival in Reims at the main train station, meet your driver and be transferred to your hotel in Sacy, located just outside the city center of Reims. The remainder of the day is at your leisure.

Today you will drive through Champagne Avenue in Epernay, the unofficial capital of Champagne. Some of the most prestigious estates are based here (Pol Roger, Perrier Jouët, Mercier, Boizel, Moët &amp; Chandon).

Visit Moët &amp; Chandon, the most famous Champagne producer, discover the Champagne making process and taste some of the 150 year- old-cuvees "Brut Imperial". You will then discover the village of Hautvillers, the Champagne birthplace, and enter the church where the famous monk Dom Pérignon is buried. At a traditional Champagne House (Le Clos Corbie, you will get to train your nose to identify the different aromas and flavors that can be found in Champagne through an olfactory workshop.

You will be served with a traditional lunch which consists of homemade regional specialties paired with a variety of Champagnes. Appreciate the charming hillsides of Champagne and a peek-behind-the-scenes of a family-run boutique winery. Visit the traditional press, vat room, and cellar of this authentic Champagne grower. Stroll down the cool cellar corridors and glance at the immense quantity of bottles slowly maturing. Enjoy several tastings of their best-seller "cuvees" and find the best values of Champagne!

Today you will have a unique experience as you sip champagne and cruise in a lovely wooden boat from the '20s, the ideal way to visit champagne. Enjoy a private boat trip in a 1927 Dutch cruiser, a vintage vessel that is agile, comfortable, and fast. The front deck is raised to host a small living room, a kitchen, and a restroom.

Your local, knowledgeable skipper will take you where one of the great French rivers meets France's most celebrated wine. Sail along from one village to another according to your wishes. A serene and peaceful way to spend an afternoon and see the vineyards from a different angle as you discover the listed UNESCO World Heritage sites from an unexpected point of view. While cruising, you will be offered a bottle of champagne from a small winemaker of the valley.

Say goodbye to the Champagne region and take a private transfer to Reims train station to your onwards journey in France or beyond.