DELUXE | PRIVATE-GUIDED: Embark on a deluxe private tour through Germany staying in gorgeous 5-star accommodations. On this German vacation, you’ll get in touch with vibrant Berlin, see reconstructed Dresden, explore the history of Munich, and tour the gorgeous fairy-tale castles of Ludwig II, including Neuschwanstein. 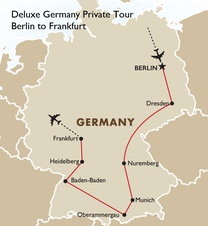 On this 9-day personalized Germany vacation your private guide takes you by luxury car from Berlin to Munich to Frankfurt to explore the highlights of the country while enjoying 5-star accommodations.

Your tour begins in Berlin, the nation’s capital and one of the coolest cities on the planet. Berlin used to conjure images of Prussian austerity and severity, but this city of 4.5 million is not stuck in the past, despite its wealth of history. It’s a vibrant capital that celebrates freedom and lifestyle and is indisputably the coolest place in Europe. Berlin has something for every kind of globetrotter on a trip to Germany. A city tour will showcase some of the best historical sites like Brandenburg Gate and Potsdam Square. Be sure to take advantage of the city’s incredible shopping scene at the KaDeWe department store or The Q shopping centre. If you have a taste for culture, take in an opera or the classical theatre, or sample the seemingly-endless lineup of musical acts that fill the city’s bars and clubs each night. If you’re a history buff, head to Checkpoint Charlie and the Berlin Wall. There are seemingly-endless ways to explore the city.

From Berlin, continue your Germany vacation by heading to Potsdam Palace to tour the gardens and the opulent interior. You’ll then pass on to Dresden to see the gorgeous reconstructed historical buildings, like the Semper Opera and Zwinger Palace. A morning tour will confirm Dresden’s place as one of the loveliest cities in the country. Over the next two days, make your way for Munich. You’ll visit Wernberg Castle and enjoy dinner at its two-star Michelin restaurant and tour Nuremberg to see the Gothic churches and romantic houses that comprise one of Germany’s historical centres.

Continue to Munich, the capital of Bavaria and Germany’s third-largest city. Munich is a very walkable city with a small-town atmosphere despite its size of 1.3 million people. Tour the medieval square of Marienplatz to get a taste for the city’s architectural heritage and see the Neues Rathaus or New Town Hall, a gorgeous neo-Gothic building with a massive 90m façade. If you love shopping, head for Maximilianstrasse to hit up its boutique stores. If museums are more your beat, be sure to visit the Alte Pinakothek, a massive art gallery housing some of Europe’s best art from the 14th through 18th centuries, as well as the Deutsches Museum, which is the oldest and largest science museum in the world. In the evening, head for the Olympic Tower and enjoy dinner at 181, which serves gourmet food against a backdrop of the city and the Alps.

Next up your German vacation takes you to the village of Oberammergau and Linderhof Castle, one of Ludwig II’s three Bavarian castles. Spend a night in Garmisch Partenkirchen, home to all things winter sports, before reaching Neuschwanstein, Ludwig’s gorgeous fairy-tale castle. Possibly the most famous castle in the world, Neuschwanstein even inspired Walt Disney in his designs for the castle in Sleeping Beauty.

Your final stops are Baden-Baden, the former hotbed of European royalty that’s known for its hot springs and casino. Hit up the luxury spa or take in a race at the speedway. The next day, stop off in Heidelberg, the country’s oldest university town and home to one of the largest pedestrian areas in all of Germany, before ending your trip to Germany in Frankfurt, Germany’s business capital and international airport hub. Consider spending an extra day in Frankfurt to see the half-timbered houses of the Altstadt or classical centres like the Romsberg before heading to the airport for your flight home.

Arrival at the airport and transfer to your hotel. In the afternoon, ascend up to the TV tower. At a height of more than 200m above the city, you can enjoy an unforgettable view of Berlin accompanied by a welcome cocktail.

In the morning, enjoy a city tour of Berlin and visit the top attractions of Germany's capital, including the Brandenburg Gate and Potsdam Square. In the afternoon, your guide shows you the best shopping destinations in the city: browse the famous "KaDeWe" department store, visit the new luxury shopping center "The Q" or explore exclusive boutiques like "The Corner".

Berlin to Sanssouci Palace to Dresden

The city of Potsdam with its famous Potsdam Palace is only a half hour drive from Berlin. Stroll the palace's exquisite gardens and admire the building's lovely interior in a private tour of the palace an hour and a half. Continue to the city of Dresden. Packed with gorgeous historic buildings like the Semper Opera or Zwinger Palace, Dresden is one of the most beautiful cities in Germany. Tour of the historic city centre.

At night, we recommend visiting a performance in Semper opera or a concert in the renovated church of Our Lady.

Dresden to Meissen to Wernberg Castle

In the morning, you have time to explore Dresden. Your guide will be pleased to offer recommendations and suggestions, such as a visit to the shops in the Altmarktgalerie. Then continue to the small town of Meissen, world famous for its porcelain production. After a tour of the historic city centre and a visit to a porcelain manufacturer, we continue to Wernberg Castle. This impressive castle has been converted into an elegant boutique hotel. Relax in the hotel's excellent spa.

In the evening, enjoy a culinary feast in the hotel's gourmet restaurant, which has been awarded 2 Michelin stars ("Kastell" - maitre cuisine: Thomas Kellermann with 2 star Michelin).

Wernberg Castle to Nuremberg to Munich

In the afternoon, we continue to Munich, the capital of Bavaria and home of BMW.

In the morning, visit the city's famous Marienplatz square with the elegant city hall and magnificent carillon, the church of Our Lady and the nearby Viktualienmarkt with delicious gourmet products. Also stroll the elegant Maximilianstrasse, lined with upscale boutiques and lovely shops. We will be pleased to help you find any speciality items. In the evening, we recommend ascending to the top of the Olympic tower to enjoy a delicious dinner in the excellent restaurant "181" who offers spectacular views of Munich and the nearby Alps.

Munich to Oberammergau to Linderhof to Garmisch Partenkirchen

Continue the tour to Oberammergau, a village that has become famous for its Passion Play and its exquisite crafts. Along the way, we visit the Wieskirche church, a UNESCO World Heritage Site. In the afternoon, explore Linderhof Castle. This is one of the 3 castles built by king Ludwig II of Bavaria and the only castle where he spent most of his time. Today's final destination is Garmisch Partenkirchen, the capital of winter sports and the capital of Germany's Winter Olypmics. Here we also find Germany's highest mountain, Zugspitze (2.962 meters).

Spend the night in the hotel nearby Schloss Elmau, idyllically located in the middle of the Alps. Dinner at the hotel.

In the morning, visit Neuschwanstein Castle. Germany's most famous castle was built by Ludwig II, who was also known as the Mad King because of strong personality and eccentricities. The Bavarian King began construction between 1869 and 1886. Resembling the medieval castles of the German knights, this castle served as the inspiration for Walt Disney when he created the castle of the Sleeping Beauty in Disneyland. Then we continue to Baden-Baden, the former summer residence European nobility. It is also world famous for its elegant hot springs and casino. Enjoy a sightseeing tour of the city.

At night, relax in one of the luxurious spas or try your luck at the race track or the casino. Conclude this tour with a delicious gourmet dinner at the hotel or at one of Baden-Baden's top restaurants.

Baden Baden to Heidelberg to Frankfurt

After breakfast, we depart for Heidelberg. Idyllically located on the shores of the Neckar River, Heidelberg is Germany's oldest university and one of the most popular destinations in the country. Visit the castle and the historic city centre. Heidelberg also features one of the largest pedestrian areas in all of Germany and offers excellent shopping.

In the afternoon, continue to Frankfurt. Transfer to the airport.