FIRST-CLASS | PRIVATE-GUIDED: Combining Moscow, St. Petersburg, and UNESCO-listed Suzdal, this first-class tour of Russia showcases the country’s most popular sites. Tour the Kremlin and enjoy a vodka tasting in Moscow, visit Sergiev Posad and the countryside city of Suzdal, then explore the State Hermitage in St. Petersburg. 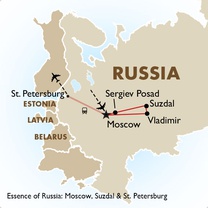 This 8-day Russian vacation takes you to Moscow, Suzdal, and St. Petersburg. It features first-class accommodations and private tours.

Your journey begins in Moscow, the capital of Russia and one of the centres of world power. Upon arrival you’ll have the rest of the day to explore on your own. The next day, tour the Kremlin, the centre of Russian military and governmental power. You’ll see the Tsar’s Residence, Grand Kremlin Palace, the Communist Congresses Palce, and the head office of the Russian president. You’ll also visit the Kremlin Armory Chamber to see the collection of military arms, treasure from the tsar, and Faberge eggs. Another day, join an expert guide to learn about the Russian spirit of choice: vodka. Enjoy three 50ml samples of premium vodkas and learn about the history and traditions associated with this clear liquor.

From Moscow, head on the road and reach Sergiev Posad, named after St. Sergius, one of the most venerated figures within the Russian Orthodox Church. See his monastery founded in the 14th-century, Holy Trinity-St. Sergius Lavra, commonly referred to as the “Russian Vatican.” Continue onward to Suzdal, a beautiful city on the banks of the Kamenka River that captures the particular rhythms of Russian country life. Explore the verdant town full of historical monuments and a distinctly-19th-century atmosphere. After exploring the city core, you’ll connect back to Moscow and continue on to St. Petersburg.

St. Petersburg used to the capital the Russian Empire and remains one of the most beautiful cities in Europe. Get a taste for Russian opulence and the majesty of the Russian Empire with a private tour of the State Hermitage Museum. Explore the collection of one of the world’s greatest museums, which has over three million works of art, and admire masterworks by Picasso and Rembrandt, as well as the unmatched architectural beauty of the Winter Palace. Another day, enjoy an evening of traditional Russian performance with “Feel Yourself Russian” at the Niklaevsky Palace. Enjoy two demonstrations of Russian folklore broken up by an intermission of drinks and snacks.

At the end of your stay, you’ll head to the airport to connect back home.

Upon arrival in Moscow, transfer to your hotel.

The Kremlin fortress is a center for so many iconic Russian and communist era monuments that this tour requires at least 4 hours to be explored. You will see the tsars' residence, the Grand Kremlin Palace, Communist Congresses Palace and the head office of the Russian president. The famous giant Tsar Bell and the Tsar Canon will amaze you with their size and grandeur.

The Kremlin Armory Chamber houses one of the most fabulous and valuable collections of arms in the world. The treasures of the tsars on display include gold, silver and jewelry made in the Kremlin workshops and presented to ambassadorial as gifts. Also on display are Faberge Easter eggs, Imperial regalia and thrones, royal carriages and parade outfit for horses, weaponry of the tsar sand coronation attire of the tsarinas. It is definitely not to be missed.

This afternoon, set out to discover one of the most well-known exports Russia has to offer; crystal clear vodka. Setting out with a private guide to lead the way, you'll enjoy three 50 ml vodka samples at a high-end restaurant, accompanied by light snacks. After meeting your guide in the hotel lobby, you'll be whisked away to sample premium vodka before being returned to your hotel after a few toasts.

Moscow to Sergiev Posad to Suzdal

Following breakfast, you will be picked up at your hotel (typically close to 9:00 a.m.) and begin the trip to Sergiev Posad alongside your private guide. The town received its name from Saint Sergius, a highly venerated figure in the Russian Orthodox Church who was born in the neighboring town of Radonezh. In the middle of the 14th century, Saint Sergius found what has now become the largest and perhaps most famous Russian monastery; the Holy Trinity-St. Sergius Lavra. The word "lavra" in Greek means 'most significant monastery', and today, it is a spectacular sight that some describe as the "Russian Vatican". It also holds the Theological Seminary which is an enormous library of religious literature that also features a trove of famous, historical, and artistic treasures. The architectural complex that is the Trinity-St. Sergius Lavra was developed over several centuries, though the oldest church on its territory is the Holy Trinity Cathedral (1422-1423), famed for its icons painted by the renowned icon painter Andrey Rublev and the 17th-century frescoes. After touring Sergiev Posad and the Trinity-St. Sergius Lavra, break for lunch at a local restaurant before traveling onward to Suzdal, where you will spend the evening.

Suzdal to Vladimir return to Moscow

The first mention of Suzdal was recorded in 1024, and somehow, the city has managed to remain young and beautiful, as it was described then. Suzdal stands along the banks of the Kamenka River and the immediate scenery gives you an idea of the seemingly boundless territory that is Russia. This is a picturesque green town, where you can experience both the typical Russian country life and walks in magical dome convents that seem from a fairy-tale. Inside Suzdal, the atmosphere is as if nothing had changed since the nineteenth century; goats, chicken, and cows graze freely next to the Kremlin and monasteries, and on the grassy lanes. City sights include St. Euthymius Monastery of Our Savior, the Convent of the Intercession, as well as the Museum of Wooden Architecture. An interesting fact is that Suzdal is considered the only city-museum in Russia. This is due to the fact that more than 300 monuments - cultural heritage sites not only for Russia but the world - are concentrated in an area of 15 kilometers. As a result, UNESCO declared the monuments of Suzdal to be a World Heritage Site in 1978. A gorgeous city often overlooked on visits to, after visiting Suzdal, you will be returned to Moscow by your private driver-guide.

Downtown location opposite the world reknowned Hermitage Museum along the Moika river embankment. Two minute walk from the Nevsky prospect/ close to all business/ shopping and cultural amenities. 19 kilometres from Pulkovo Airport.
A classic European hotel with a historic facade dating back to 1853 faithfully retained while the building has been entirely reconstructed. Located in a charming and exclusive area/ at the very heart of St. Petersburg/ on the Moika River/ opposite the renowned Hermitage Museum. The hotel is just two minutes walk from Nevsky Prospect/ close to all major sites and shopping/ whilst being only 30 minutes from Pulkovo airport.The hotel offers 200 rooms including 29 luxurious suites.

With more than three million works of art (yes, three million!), it would take days - if not weeks, months, or years - to thoroughly explore and appreciate all that the State Hermitage Museum has to offer. One of the oldest and the largest museums in the world, it was founded in 1764 in the very heart of St. Petersburg. It is housed in six historic buildings including the famous Winter Palace, which plays the leading role in this unique architectural ensemble as it was once a prized residence of the Russian Tsars. With the possible exception of the Louvre, there is no museum in the world that rivals the Hermitage in size and quality, and today your exploration will be furthered by an English-speaking guide. The museum is especially strong in Italian Renaissance and French Impressionist paintings and features outstanding collections of works by Rembrandt, Picasso, and Matisse. As the Hermitage is so enormous, its collection so strong and diverse, and its interior so attractive in its own right, many visitors find that the best way to tour the museum is to make several brief visits rather than one marathon tour. As the director of the Hermitage once said: "I can't say that the Hermitage is the number one museum in the world, but it's certainly not the second" - on this private-guided exploration, discover the wonders of the State Hermitage Museum for yourself, and then consider a second visit later in your trip. After two hours in the museum, you will be returned to your hotel or be left at the museum to explore on your own (if so, you will need to make your own way back to your hotel).

Feel Yourself Russian is a memorable folklore performance that showcases the traditional music, costumes, and theatrics of Russia in a lively and fun-spirited style. Held nightly at the impressive Nikolaevsky Palace in the heart of St. Petersburg, the show begins at 7:00 pm and consists of two 45-minute shows that are separated by a brief intermission where you are offered fruit, canapes with red caviar, Russian style salami, cheeses, vodka, champagne, red wine, juices, and mineral water. Before the show begins you'll meet your private, English-speaking driver, transfer to the palace, settle in for the show, and then be returned to your hotel following the performance.