Essentials of Spain from Madrid to Barcelona

Visit five iconic Spanish cities, Madrid the capital, Cordoba, Seville and Granada in Andalusia and Barcelona in Catalonia, each with its own character, culture and history. Enjoy magnificent architecture, old and new and be awed by all that Spain has to offer the visitor. 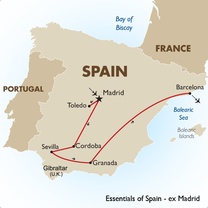 Start your tour of some of the most important cities in Spain in Madrid where you will spend your first 2 nights. The first full day brings a sightseeing tour of the city which includes some of Madrid’s majestic and attractive avenues such as the Gran Via, a showcase of early 20th Century architecture and the extensive and impressive Paseo de Castellana. Also visit the Plaza de Toro de las Venta, Madrid’s famous bullfighting arena. After the tour, have lunch at one of Madrid’s well known restaurants then travel to Toledo outside of Madrid. It is situated on the top of a small mountain and is surrounded by amazing city walls. Inside it is architecturally beautiful with much ambience.

The following day, take the high speed train to Andalusia and the city of Cordoba, a UNESCO World Heritage site in itself with diverse historical influences. You will spend overnight here. The remainder of the day is at leisure.

Your sightseeing the next morning includes the Alcazar de Los Reyes Cristianos , an 8th Century fortress, the Great Mezquito Mosque, now turned into a cathedral and full of history and beauty, the colourful Jewish quarter and the Synagogue of Cordoba dating back to the 14th Century and one of only three remaining in Spain. After some free time, catch a late afternoon train to Seville where you will stay for the next 2 nights.

The next morning have a tour of Seville which includes the University which was formerly a tobacco factory and was a feature in Bizet’s Carmen, the imposing Golden Tower, once a prison, the baroque style San Telmo Palace, the Jewish Quarter with its maze of narrow streets and the awe-inspiring Seville Cathedral, the third largest cathedral in the world and the burial site of Christopher Columbus. After your sightseeing, enjoy a cruise on the Guadalquivir River which dissects the city and from which you will have a different perspective of Seville.

Then the following day, take another train to Granada for an overnight stay. This evening, enjoy dinner and a flamenco dance performance. Your sightseeing in Granada will include a visit to the Alhambra. An undisputed jewel in Spain’s history crown, this magnificent fortress dates back to 889. It was rebuilt by the Moors and expanded into a royal palace between the 11th and 14th centuries. Also tour the adjacent Generalife Gardens. Later, in the evening, fly to Barcelona where you will spend the next 2 nights.

The next morning, enjoy a full day discovering Barcelona starting with visits to the heart of the city , the Plaza Catalunya, the Gothic Quarter with its old narrow streets and the Montjuic area reached by cable car on top of which sits the Spanish Village, an open air museum of old historical buildings. In the afternoon, get to know all about the renowned Spanish architect Gaudi and his unusual and bizarre but unique designs reflected in apartment buildings, the Parc Guell and the amazing unfinished Sagrada Familia Cathedral.

Upon arrival to Madrid you will be met by a Goway representative and transferred to your hotel. You will get a welcome pack with the information about the cities and sights. You have the rest of the day/evening at leisure, with the option of wine and "tapas" in a typical bar.

Your day begins with breakfast at the hotel, then departure for a panoramic tour to discover the most interesting parts of the city: Gran Via, Paseo de la Castellana, Puerta del Sol, and Plaza de Toros de las Ventas (bullfighting). There will be a stop at Hard Rock Cafe with refreshments included. Lunch is also included today, and will be at "La Capilla de la Bolsa" restaurant. In the afternoon you will go to Toledo to visit this beautiful city, one with the most monumental heritages in Europe. Enjoy panoramic views and visit the important monuments such as the "Santa Maria La Blanca Synagogue" and the Damasquinado workshop.

This morning you can enjoy a leisurely breakfast at the hotel then some free time to explore the local area. Around noon you will be transferred to the train station for the AVE (high speed train) to Cordoba (approximately a 2 hour train ride). You will arrive in Cordoba in the mid-afternoon, and transferred to your hotel. The rest of the day is at leisure.

You have breakfast at the hotel followed by a visit to the city. The tour begins by visiting the Alcazar de los Reyes Cristianos and continues to the Great Mosque-Cathedral of Cordoba Umayyad, an Andalusian treasure with its impressive "forest of columns". You will visit the famous Jewish quarter, walk through its picturesque streets and squares full of local color, ending in the Synagogue of Cordoba, the only surviving one in Andalusia. You will then have some free time for lunch and be transferred to the train station for the AVE train bound for Sevilla. Train departs around 5pm and takes approximately 45 minutes. Upon arrival in Sevilla you will be transferred to your hotel. Enjoy the rest of your evening at leisure.

After breakfast you will take a minibus city tour, visiting the most important sights of this beautiful historic place: the University, the Old Snuff Factory, Plaza of Spain - the most symbolic work of the Ibero-American Exposition of 1929, the Palace of San Telmo, the Golden Tower and the Bridge Isabela II. Discover Santa Cruz - the ancient Jewish Quarter: a maze of narrow streets leading to the famous Plaza de los Venerables. You will tour the Royal Palace - the oldest royal palace still in use in Europe and the Seville Cathedral - the largest Gothic cathedral and the third-largest church in the world. The cathedral is also the burial site of Christopher Columbus. Tours ends at the Cathedral. In the afternoon there will be a cruise on the Guadalquivir - the only navigable river in Spain to admire the sights from a completely different perspective.

This morning you will have breakfast at the hotel before being transferred to the train station. Your train departs around noon and travels from Seville to Granada (approximately 3 hours). Upon arrival in Granada you will be transferred to your hotel. This evening you are invited to dinner and a Flamenco Show at The Temple of Flamenco - the best show in town.

After breakfast at the hotel you will have a chance to visit the impressive Alhambra - the most remarkable fortress ever constructed and Generalife Gardens built in the 13th century to overlook the Alhambra and set on 30 lush hectares (74 acres). You will then have time at leisure before being transferred to the airport for your flight to Barcelona at around 9:00pm (maximum 1 checked bag at 23kg). Upon arrival in Barcelona you will be transferred to your hotel.

Your day begins with breakfast at the hotel followed by a full day tour of Barcelona. This tour will take you through the heart of the city and includes Plaza Catalunya, Gothic Quarter and the Montjuic area where you enjoy a cable car ride to the top, "Spanish Village" displaying the building styles which are typical of the various provinces of Spain. The afternoon portion of the tour is dedicated to the artist Gaudi. You will pass outside the Batlo and Pedrera houses, following by a stop at the fabulous Guell Park and visit the impressive unfinished Sagrada Familia Cathedral. Dinner this evening is in a typical restaurant (rice and fish) with the views of the sea in Barcelona Beach.

Today is departure day. After breakfast you will be transferred to the Barcelona airport for your onward journey.