Venture to Germany’s most popular cities during the heart of the Christmas season. Travelling to Berlin, Dresden, Nuremberg, and Munich, you’ll explore historic old towns, tour castles and palaces, and visit the world’s most-famous Christmas markets to get in the spirit of the season. 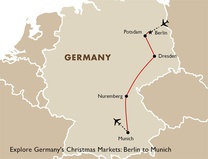 This 11-day German vacation takes you to Christmas markets in Berlin, Dresden, Nuremberg, and Munich.

Your trip to Germany begins in Berlin, the country’s capital and one of the most vibrant cities on the planet. Berlin has enough historical sites and museums to delight even the most seasoned history buffs, but it’s also home to some of the coolest nightclubs, bars, and restaurants in Europe. As such, it offers something for every kind of traveller. On your first day in the city, head on a tour to some of its historical landmarks, including Museum Island, the State Opera House, and mighty Brandenburg Gate. You’ll also stop by one of the city’s many Christmas markets like the Gendarmenmarkt, where you can celebrate the holidays with a glass of mulled wine and some baked treats. The next day, drive your own trabi to landmarks off the beaten path, including the remnants of the Berlin Wall at the East Side Gallery and Oberbaumbridge. On your final day in Berlin, explore nearby Potsdam, with its stunning palaces and vibrant mix of cultures. Stroll through the gardens of Sanssoci Palace and explore Charlottenhof Castle.

From Berlin, continue your Christmas vacation by heading to Dresden, the gorgeous Baroque city rebuilt from the ashes of World War II. Use the Hop-On Hop-Off bus tour in the morning to take in historical sites like Theater Square and Augustus Bridge. In the afternoon, head on a city tour to see the reconstructed Frauenkirche and the Opera House and stroll along the picturesque Elbe River. You’ll also visit one of the city’s popular Christmas markets, such as the Striezelmarkt, which has been dazzling merrymakers since 1434.

Pass on to Nuremberg, the second-largest city in Bavaria and one of Germany’s historical centres. Explore the old town and its many historical landmarks on a walking tour, including Nuremberg Castle, which was home to the Holy Roman Emperor during the Middle Ages. Of course, the city’s chief attraction on your holiday vacation is the Christkindlesmarkt, which attracts two million visitors per year. It’s Germany’s most famous Christmas market and has brought the season to life for the past 400 years. Enjoy the gorgeous atmosphere, built around the stunning Gothic Frauenkirche, and treat yourself to local specialties like Bratwurst, spiced bread, and mulled wine.

The final stop on your Christmas vacation is Munich, the capital of Bavaria and Germany’s third-largest city. Despite its size, Munich remains a very walkable city with a charming small-town atmosphere. Spend some time getting acquainted with its Bavarian atmosphere by taking advantage of the Hop-On Hop-Off sightseeing bus, heading to Alte Pinakothek, one of Europe’s best art galleries, the Neo-Gothic New Town Hall, and the Viktualienmarkt street market. After getting a taste for the city’s architecture, head to the Christmas market near the medieval square of Marienplatz. Marvel at the largest nativity market in Germany and treat yourself to all manner of tasty treats. The next day is at leisure to visit nearby landmarks like Neuschwanstein Castle, the fairy tale castle of King Ludwig II and the inspiration for Disney’s Sleeping Beauty.

At the end of your time in Munich, head to the airport or train station to continue your onward journey.

Today, you will arrive in Berlin and be transferred to your hotel. Later today, you will meet your guide for a 3-hour walking tour of Berlin. Begin with the origins of Berlin in the district of San Nicolas, see the Museum Island and Berlin Cathedral. Walk through the Unter den Linden Avenue, the Humboldt University, the Royal Library, the State Opera and one of the most beautiful squares in Berlin, the Gendarmenmarkt. You learn about the details of Hitler's rise to power, and in addition, you see the Holocaust memorial to remember the murdered European Jews. Admire the spectacular Potsdamer Platz and finish at the Brandenburg Gate, the symbol of Berlin.

This morning, you will make your own way to meet your 1.5 hr Trabi Tour (Self-drive in your own Trabi). These famous cars are an experience to drive and discover the east of Berlin off the beaten tourist path. The route leads you through the middle and the former eastern part of the city along the Karl-Marx-Allee and East Side Gallery, the longest remaining portion of the Berlin Wall over Oberbaumbridge and through the quarter Kreuzberg.

Continue exploring the city by hop on hop off bus. Discover all that Berlin has to offer as you travel independently around the city. Listen to the audio explain the history of this exciting city as you take an opportunity to get off the bus and explore the sites that interest you. There are 20 different stops to choose from, and the route takes a minimum of 2.5hrs if you ride the bus non-stop.

Today, will be spent on a 6 hour private tour to Potsdam. This tour offers an incredible mix of cultures, arts and architectural styles. Visit the old quarter, the Russian settlement of "Alexandrowka" and the Dutch quarter. Enjoy a stroll through the beautiful gardens of Sanssouci Palace, a UNESCO heritage site, the New Palace, the New Chambers Palace, the historic Windmill, Charlottenhof Castle, the Roman baths, the Orangery Palace and much more.

The tour includes two hours of free time, an opportunity to visit one of these palaces and enjoy a delicious lunch at a charming local restaurant (please note that the Sanssouci Palace is closed on Mondays).

This morning, you will say goodbye to Berlin and be transferred to the train station to meet your train to Dresden. You will be met in Dresden and transferred to your hotel. You will have the remainder of the day at leisure.

Make your way to the meeting point of the hop on hop off bus. The beginning is at the Theaterplatz near the Augustusbrucke; the buses run regularly every 15 to 30 minutes at the Dresden Hop On Hop Off stops. For example, the Theater Square at the Augustus Bridge, the Zwinger, the Yenidze, the Albertinum, the Frauenkirche, the Hygiene Museum, the Transparent VW Manufactory, the Blue Wonder, the Waldschlosschen or the Pfunds Dairy.

Later today, you will meet your guide for your 3-hour private walking tour of the Christmas Markets. Dresden is a city with one of the most beautiful historical centres of Germany. Visit the recently restored Frauenkirche church, the famous Dresden Opera House, the Imperial Zwinger palace and stroll along the Elbe River.

This tour will also include a visit to the castles on the banks of the Elbe river, the Opera Square, one of the city's landmarks, the famous Opera House designed by architect Gottfried Semper and the Museum with its world-renowned collection of old masters, including Santi Raffael, Titian, Rubens and Rembrandt paintings (does not include any admission).

During the visits make some break at one of Dresden's Christmas markets. If you are interested in spending more time at the Christmas market, please let your guide know at the beginning of the tour, and they will concentrate their focus on it.

This morning, you will be met at your hotel and transferred to the train station to meet your train to Nuremberg.

Today, you will have part of the day to explore on your own. You may want to consider taking a city tour or just relaxing before your 3-hour walking tour of Nuremberg including its world-famous Christmas Market. During this tour, not only will you get to experience the market but you may visit the old part of the city, where you will find many famous sites. Visit the castle, one of the most important medieval imperial palaces. Its privileged vantage point offers incredible views of the city. The castle has been home to every emperor of the Holy German Empire, between 1050 and 1571.

Today, you will be met at your hotel and transferred to the train station to meet your train to Munich.

This morning, you will explore by hop on hop off bus. This regular tour allows you to discover the Bavarian capital at a leisurely pace. You may disembark and visit the attractions at any of the stops around the city and then return to the bus and continue the tour. The Express circle (1 hour without disembarking) includes stops at the Art Museum, Odeon square, the National Theater, Max Joseph square, Marienplatz square, Town Hall, Frauenkirche Church and Viktualienmarkt market.

This afternoon, you will discover the more than eight centuries of history of the Bavarian capital in just three hours - all during a walking tour! Munich, home to the famous Oktoberfest, is also one of the most important cities to understand the history and culture of the German people. Starting at the Karlstor, passing by the church St. Michael, where are the remains of "Mad King", the Marienplatz square with the City Hall and its famous carillon, the Frauenkirche and many other attractions of the historic centre. During the visits make some break at one of the Munich Christmas markets. If you are more interested in the Christmas market, your guide can visit some more markets with you.

Today is your day at leisure consider taking a day trip to Neuwechenstein Castle, Dachau or many of the other famous interesting historical sites in the region. Or spend the day exploring more of what Munich has to offer.

Today, you will say goodbye to Munich as you are transferred onto your next arrangements.