FIRST-CLASS | ESCORTED COACH: Enjoy time in three Scandinavian capitals, Copenhagen, Oslo and Stockholm plus get to know Norway’s awesome and dramatic scenery. Stop in the attractive city of Bergen, travel through and along iconic Norwegian fjords and spend time in small Nordic towns. 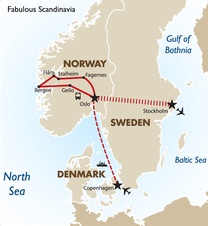 Start off in Denmark’s capital, Copenhagen, with one night’s accommodation. The following morning, enjoy a tour of the city and see all the major attractions of Wonderful Copenhagen including the old canal area of Nyhavn with its picturesque houses and boats, Tivoli Gardens, the royal residence of Amalienborg Palace, the Royal Danish Opera with its splendid panoramic view, the Danish Parliament, Christiansborg, Rosenberg Castle and of course the statue of the Little Mermaid.

Later the same day, board the overnight ferry bound for Oslo in Norway. On arrival in Oslo, have a tour of the city which includes the Opera House situated right on the Oslo fjord where you will spend some time on the terrace area before heading off to Bygdoy Island. Unique Vigeland Park here is one of the major Scandinavian cultural treasures with the open air sculptures of Gustav Vigeland. The tour ends downtown where you will have some free time to explore the Viking capital on your own. Afterwards, depart from Oslo and travel through landscapes of the pine forests and lakes of the Hallingdal Valley. Eventually arrive at the small town of Geilo surrounded by mountains and famous for its ski facilities. Stay overnight here.

The following morning, head to the impressive Hardangerfjord, the third longest fjord in the world which supports a busy salmon industry exported across the world. Travel across the newly opened Hardanger Bridge, one of the longest suspension bridge spans in the world. Arrive in Bergen, commonly thought to be Norway’s most beautiful city and have an afternoon tour which includes St. Mary’s Church, Haakon's Hall, the colourful and picturesque fish markets and the old Bryggen area district. This is the only surviving trace of the Hanseatic League, the trade alliance that once spanned Northern Europe all the way into Russia. Overnight in Bergen.

Spend the next morning at leisure before departing for the historic town of Voss with its stunning background of snow-clad mountains. After a short break here, continue to the Naeroy Valley and Stalheim for overnight.

Then it’s off down the Naeroy Valley to Gudvangen. Here, board a ferry for a breath-taking crossing along the Aurland & Naeroy fjords which are branches of the Sognefjord, the longest and deepest fjord in Norway. Disembark in the stunning village of Flam where you will have some free time. Take the opportunity to try the Flam Railway one of the most famous and breathtaking railway journeys in the world. Later, travel along the Aurlandfjord and have a photo stop at the Borgund Stave Church eventually arriving at Fagernes for overnight accommodation.
Then return the next morning to Oslo with the rest of the day free to explore the city. Oslo is often Scandinavia’s most underrated capital, but it is one that’s well worth getting to know.

Depart the following day and travel through Norwegian and Swedish forests arriving eventually in Stockholm, Sweden’s attractive capital where you will stay for 2 nights.

Included here is a tour of Stockholm which shows of the classical and modern architecture reflected in many of its interesting buildings. It is a city rich in culture and history. The heart of Stockholm is the Old Town known as Gamla Stan, the picturesque original city centre dating back to the 13th Century with its cobble stone streets, alleyways, quaint shops and palaces and home to several museums. Highlights on the tour include the Old Town with a visit to the City Hall where the Nobel festivities take place every year. Also visit Fjallgatan located high up on the edge of a cliff with a fantastic view of the city. The area around Fjallgatan is lined with well-preserved wooden buildings from the 1700’s on one side and the magnificent view on the other.

Arrival to Copenhagen Airport, meet and greet by your English-speaking representative, for Arrival Transfer Service to the hotel for check-in (Please see notes below for this service). Please consult the welcome letter which you will receive on check-in to your hotel, and kindly note where and when to meet your tour leader. A short welcome meeting will be held at 19:00, where you will receive information on the upcoming tour program while enjoying a welcome drink. The rest of the day is at leisure.

IMPORTANT NOTE: Arrival Transfer Services, included in the program, are only available for transfers from Airport in Copenhagen and only on the official start date of the tour. The transfers are escorted by an English-speaking representative and are shared with other fellow passengers; therefore, minor waiting time at the airport may occur.

This morning we depart by private coach with your guide for a panoramic sightseeing tour of Copenhagen. This tour will be the perfect introduction to "Wonderful Copenhagen". We begin with a drive towards the City Hall Square where the famous pedestrian street "Stroget" begins. Passing by Tivoli Gardens and onwards past the New Carlsberg Glyptotheque and the National Museum. Next, it is the Old Stock Exchange and the Naval Church.

We drive past the Kings New Square, the home of the Royal Danish Theatre with the world famous ballet, then through the old canal area, Nyhavn, with its picturesque houses and boats. We continue on to the impressive Gefion Fountain and the Royal residence, Amalienborg Palace. Finally, we stop by the landmark of Copenhagen, the statue of the Little Mermaid. During the tour, you can also delight in Christiansborg Palace as well as Rosenborg Castle, which houses the Crown Jewels. The tour ends at the hotel.

In the afternoon transfer to the pier by private coach to embark on the DFDS Seaways overnight ferry. At approximately 16:30, departure to Oslo. Buffet dinner will be served on board.

NOTE: Passports must be shown when travelling between Denmark and Norway on the DFDS ferry. Clients travelling with E.U. identification cards only may not be allowed on-board.

Breakfast on board. Arrival to Oslo at 09:45, after disembarking we will board our private coach. We drive across Hoenefoss, Nesbyen surrounded by a landscape, which alternates between forests of pines and lakes to arrive in the beautiful Hallingdal Valley. Proceed through Gol followed by Geilo, a small town surrounded by mountains. We continue to Hardangervidda and visit the Voringfossen waterfall, and continue to Eidfjord, where our hotel is located. Check-in and dinner at the hotel is included.

NOTE: The departure of July 30th is waitlisted at Hotel Quality Voringfoss. The hotel will confirm the latest 3 weeks before departure, and it will be a 4-star hotel located in the fjord area.

This morning you head towards the Hardanger Fjord and make a stop at Voringfoss, a powerful waterfall that thunders down 597 feet from the Hardanger Plateau. A short drive via Eidfjord to Brimnes, where you will cross the splendid Hardanger fjord, by travelling across the newly opened Hardanger Bridge.

This Bridge has one of the longest suspension bridge spans in the world. After reaching the other side, we will continue bordering the fjord, passing by Nordheimsund and crossing birch forests until we arrive in Bergen - known as the capital of the fjords.

In the afternoon, meet the guide in the hotel, for a panoramic sightseeing tour during which we will delight in St. Marys Church, Haakon's Hall, the colourful and picturesque fish markets and the old Bryggen area (No entrances included). The evening is at your leisure.

Optional Tour (not included in trip price): We recommend a journey up on the Floibanen, a funicular railway journey that will take you up the mountainside in order to enjoy the most amazing views of Bergen.

The morning is at your leisure to further explore the stunning fjord capital of Bergen. Early afternoon departure from Bergen and travel to the historic town of Voss, with a stunning background of snow clad mountains. After a short break, the journey continues towards Naeroy valley where our hotel is situated. The rest of the afternoon is at leisure to enjoy the stunning views down the Stalheim Gorge. Dinner is included at the hotel.

NOTE: The departure of July 2nd is waitlisted at Stalheim Hotel. The hotel will confirm the latest 3 weeks before departure, and it will be a 4-star hotel located in the fjord area.

After breakfast, the coach continues down the Naeroy valley to Gudvangen where we embark on a ferry along the Naeroyfjord, one of the narrowest and most popular fjord journeys in Norway. Disembark in the stunning village of Flam where we will have some free time.

Optional tour (not included in the trip price): Take the opportunity to try the Flam Railway one of the most famous and breath-taking railway journeys in the world.

In the afternoon, the coach journey continues along the Aurlandfjord, via Aurland and Lærdal. A photo stop is made at the popular Borgund Stave church (entrance not included) before continuing on the last part of the journey to Fagernes. Check-in and later dinner at the hotel.

After breakfast, we travel towards Oslo, leaving the fjords behind. Early afternoon arrival in Oslo and check-in to the hotel. Afternoon and evening is at your leisure to further explore the Norwegian Capital.

Optional: Why not take a harbour cruise or visit one of the many fantastic museums (not included).

Depart Oslo and travel (by private coach/train) to Stockholm, passing through Norwegian and Swedish forests and the region of Varmland, home of many Nordic legends. Late afternoon arrival to Stockholm, capital of Sweden, for check-in to the hotel. The evening is at your leisure.

Meet your guide and depart by private coach for a 3-hour city sightseeing tour of Stockholm. The city, built on 14 islands, connected by 57 bridges, embraces the unique character of 13th century Old Town with modern high-tech architecture. Stockholm is proudly called "Beauty on Water". The sightseeing tour includes a walk through the Old Town, and an inside visit to the City Hall, where the Nobel festivities take place, making for a memorable morning tour. Feel the medieval atmosphere of the Old Town "Gamla Stan", with its Cathedral and Stortorget, where the Stockholm Blood Bath took place. The tour also includes a drive to Fjallgatan where you will enjoy picturesque views of Stockholm. The tour ends at the hotel. The afternoon is at leisure.

Optional our (not included in the trip price): Directly after the tour take a visit to the famous Vasa Museum.

Breakfast at the hotel.

Our English-speaking representative will meet you for the Transfer Service to Stockholm Airport (please see notes below for this service).

IMPORTANT NOTE: Regular Departure Transfer Services included in the program are only available for transfer to Arlanda Airport in Stockholm and only on the official end date of the tour. The transfers are escorted by an English-speaking representative from Borealis Destination Management and are shared with other fellow passengers; therefore, minor waiting time at the airport may occur.

2021: Dates to be advised, please inquire

Trip not available for sale in Australia or New Zealand