DELUXE | TAILOR-MADE: Explore two of France’s historical areas: Paris and Normandy. In Paris, trace the history of the French Revolution and cruise the Seine, before you see Versailles and Giverny on a day trip. Connect into Normandy to tour the beaches of D-Day and visit beautiful Mont Saint-Michel. 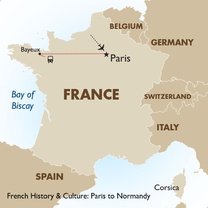 This 7-day French vacation takes you to Paris, the beaches of Normandy, and Mont Saint-Michel. It features deluxe accommodations and small-group tours.

Your journey to France begins in Paris, the City of Light, where you’ll see world-famous landmarks and soak up the romantic atmosphere. A walking tour takes you in and around the Champs de Mars and traces stories of the French Revolution. Start at the Rodin Museum and swing by local shops to try cheese, pastry, and other treats before ending at the Eiffel Tower. Board a river vessel on the Seine and enjoy an hour-long lunch cruise, taking in the sights from the river as you dine on your French meal. While based in Paris, you’ll also take a day trip to nearby artistic and architectural landmarks. Swing by Versailles, the palace of the Sun King Louis XIV, to experience the heights of French opulence. Continue on to Giverny to visit the home of Impressionist master, Claude Monet, see the gardens that inspired his art, and enjoy a three-course meal at Le Moulin de Fourges restaurant.

Connect to Bayeux by train, the home of the famous Bayeux Tapestry, which charts the invasion of England by William the Conqueror, and one of the loveliest towns in Normandy. Based in Bayeux, you’ll explore nearby war monuments and UNESCO World Heritage Sites. One day, delve into the dark history of D-Day on the beaches of Normandy. During your historical tour, you’ll visit the American Cemetery at Colleville-sur-Mer, Omaha Beach, the village of Sainte-Mere-Eglise, and Utah Beach. The next day, head to Mont Saint-Michel to explore this breathtaking Benedictine abbey which transforms into an island at high tide.

At the end of your vacation, head to the train station in Bayeux for onward travels.

Upon arrival in Paris, you will be transferred to your hotel in Paris.  A driver or the assistant will be waiting just after the customer exit, and will be holding a sign with your name on it. The remainder of the day is at your leisure

Enjoy this 3 hour walking tour in Paris 7th district and explore the iconic places of the area and the lesser known places. After having a walk in the gardens of Rodin museum, you will walk to Invalides, and then head to the gourmet street of the area. Make a stop at a fantastic cheese shop and have a drink "a la francaise" and discover excellent local gourmet shops. Next, enjoy a pastry tasting, before reaching Champs de Mars to learn about the history of Eiffel tower. Entrance to the Eiffel Tower is not included.

In the afternoon, you will enjoy lunch as you cruise along Paris iconic Seine River. The Seine is one of the world's most urban rivers, flanked by the emblematic monuments of Paris. This is an ideal opportunity combining lunch with a cruise on the Seine alongside the splendid panorama of the city's historic buildings. Take in the stunning beauty while enjoying a typical French menu. For lunch, take an aperitif of white wine kir as welcome drink. You will have a choice of a starter, main dish, dessert and 1 bottle of red or wine.

Discover the Palace of Versailles, the residence of the 'Sun King' and the home of Claude Monet, 'Prince of the Impressionists' in just one day. You will travel in style aboard a luxury minibus with one of our expert guides, so you can sit back, relax and make the most of your day! This day trip will lead you from Paris to the edge of Normandy, where you will first visit the idyllic home of Claude Monet. The leader of the Impressionist School lived here from 1883 to 1926, the colorful decor and pink brick facade are an intimate reminder of its former life. You will enjoy a fabulous 3-course lunch at the "Moulin de Fourges" restaurant. The precious collection of Japanese engravings is displayed in several rooms, hung in the manner chosen by the master of Giverny himself. Claude Monet's property at Giverny, left by his son to the Academie des Beaux-arts in 1966, has, after completion of large scale restoration work, become the Claude Monet Foundation, inaugurated in 1980. The huge Nympheas studio, a stone’s throw from the house, has also been restored and contains the Foundation's Shop.

Say goodbye to the Paris and take a private transfer to the airport or train station to your onwards journey in France or beyond.

Upon arrival at the Bayeux Train Station, you will be transferred to your hotel in Bayeux. A driver will be waiting for you at the end of the platform at the front of the train holding a sign with your name on it. The remainder of the day is at your leisure.

Today, your expert guide will take you back in time to the different emblematic places of Operation Overlord. Explore the D-Day landing beaches and gain insight into World War II history. Learn the names of the men and women who made the ultimate sacrifice. Your first stop will be the American Cemetery at Colleville-Sur-Mer, located on the top of the cliff overlooking the famous Omaha Beach. The cemetery is one of the largest American World War II cemeteries constructed on foreign soil.

Next is Omaha Beach, which is sadly renowned for the most devastating but glorious moment of the Normandy invasion, marking the beginning of the end of World War II. You will also get to see Pointe du Hoc. An ominous piece of land jutting into the English Channel. It provided an elevated vantage point from which large German guns with a range of 15 miles km (25 kilometers) could deliver fire upon both Omaha Beach and Utah Beach. The neutralization of these guns by the allied forces was the key to victory. Visit Sainte-Mère-Église, one of the first French villages to be liberated. It is famous for a paratrooper who remained attached to the bell tower of the church. Close to the church stands the Airborne Museum. There, you will learn more about the role played by the paratroopers in Operation Overlord.

The final stop will be Utah Beach, the westernmost beach in the combat zone, where 23,200 American soldiers landed on D-Day.

You will depart from Bayeux for a day trip to visit one of the most popular and emblematic sites in France: Mont Saint-Michel and its bay, a unique place between sky and sea. The site is a UNESCO World Heritage Site with the distinctive characteristic of being built on a rocky islet, surrounded by a magnificent bay with the highest tides in continental Europe. Your expert guide will make you discover all aspects and reveal all the secrets of its famous abbey. From here, you will admire one of the most beautiful and largest bays in the world. Stroll through the maze of streets in the village.

Visit the Benedictine Abbey founded at the beginning of the 8th century. It is one of the most important places of pilgrimage in the Middle Ages, a jewel of Romanesque, Gothic and flamboyant arts: the cloister, the refectory, and its authentic garden overlooking the sea.

At the end of the visit, you will have free time to have lunch and fully enjoy Mont Saint-Michel for two hours before heading back to Bayeux.

Take a private transfer to the Bayeux train station to your onwards journey in France or beyond.

2022: July to October: Monday to Thursday