Get into the spirit of the season with a visit to Germany’s world-famous Christmas Markets. Passing from Frankfurt to Nuremberg, Dresden, and finally Berlin, you’ll explore gorgeous cityscapes and enjoy the festivities of several Christmas Markets, which attract millions of visitors each year. 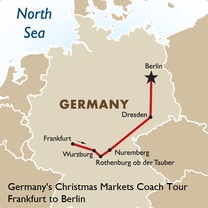 This 7-day Germany vacation takes you to some of the most popular Christmas Markets in the country. It’s an ideal winter vacation for families and holidaymakers.

Your wintery German vacation begins in Frankfurt, Germany’s financial hub and home to the international airport that connects over 60 million passengers a year. Take the day to explore the city’s mixture of tradition and modernism, heading to the Altstadt to see half-timbered homes and classical centres like the Romsberg and Paulskirche, the seat of the first democratic parliament in Germany in 1848.

After getting a taste for Germany in Frankfurt, head to nearby Wurzburg to tour its 1,300-year-old streets. From Wurzburg, continue to Rothenburg ob der Tauber, the most beautiful city along the Romantic Route and the site of your first Christmas Market. Enjoy a glass of mulled wine and some roasted chestnuts, and admire the gorgeous decorations that transform the city’s medieval centre.

After getting into the spirit of the season in Rothenburg, head to Nuremberg, the second largest city in Bavaria and the centre of much of the country’s history. Take a guided tour to see how the city was painstakingly recreated after World War II and admire many of its most beloved buildings, like Nuremberg Castle. Of course, the chief attraction to you and everyone else come December is the popular Christkindlesmarkt that attracts two million visitors per year. Built around the stunning Gothic Frauenkirche, the Christkindlesmarkt is one of the most popular Christmas markets in the world.

Continue along to Dresden, the gorgeous city rebuilt from the ashes of World War II. A morning city tour will take you to the reconstructed Frauenkirche, the Opera House, and along the picturesque Elbe River. Afterwards, head over to Altmarkt Square to continue your celebration of the season at the Striezelmarkt, which has been entrancing merrymakers since 1434. Today, over two and a half million people visit the market each year.

Close out your Christmas vacation in Berlin, the country’s capital and one of the most vibrant cities on the planet. While Berlin used to be known for being austere, it’s quickly transformed into the coolest place in Europe and offers something for every kind of traveller. Take a tour of the landmarks, from the State Opera to Brandenburg Gate and Checkpoint Charlie. Then, head to one of its many Christmas Markets to close out your celebration of the holidays with one final glass of mulled wine and one final chance to buy a charming traditional toy or trinket.

This Germany vacation to the country’s famous Christmas Markets is a perfect way to celebrate the holidays.

Arrival at Frankfurt airport and transfer to the hotel. The rest of the day is free to spend at your leisure.

Travel from Frankfurt to Wurzburg and enjoy a sightseeing tour of a city with more than 1300 years of history. The old residence of Wurzburg is a UNESCO Heritage site. Continue to Rothenburg ob der Tauber, the most beautiful city along the famous Romantic route. Its small streets and historic buildings remind us of medieval times. Visit the city and tour the Christmas market.

Continue to Nuremberg. Explore the city with your guide.

The Christkindlesmarket, Nuremberg's Christmas market, is one of the most famous markets in Germany. With almost 400 years of history, the market draws more than 2 million visitors a year.

In the morning we depart to Dresden. Dresden is one of the most beautiful cities in Germany and a combination of tradition and modern times determine the cultural charm of this city. Visit the famous "Striezelmarkt" Christmas market which is first documented in 1434. Every year more than 2.5 million people visit Dresden's Altmarkt square to soak up the bustling at mosphere of this charming market.

In the morning City Tour of Dresden. Visit the recently restored Frauenkirche church, the famous Dresden Opera House, the Imperial Zwinger palace and enjoy a stroll along the Elbe River. At noon, travel to Berlin. The German capital is one of the most important cities in Europe. Visit one of many Christmas markets in this impressive capital.

In the morning you will start the day with a visit to the TV tower for a spectacular view
over the capital. Afterwards, you visit Berlin's many well-known historic locations, like Under den Linden Avenue, the State Opera and the Brandenburg Gate. There will also be time to explore the modern parts of the city, such as the German Parliament and Potsdam Square.

The afternoon is free to explore the city at your leisure.

After breakfast transfer to the airport. End of services.

Prices are "from" per person based on twin/double share accommodation and for travel in low season. Seasonal surcharges and blackout dates may apply. Limited seat/spaces and all pricing is subject to change and availability. Rates for single or triple travellers are available on request - please enquire. *Please note that the Private Tour is at a higher cost - please enquire for pricing.