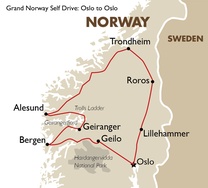 This 12-day self-drive tour is perfect for independent travelers who like the flexibility to decide their own pace and itinerary when exploring the world. Whether you prefer a self-drive car with pre-booked accommodation or a rental car, Goway has you covered. Norway is a perfect country to explore at your own pace. If this tour peaks your interest, we also offer self-drive tours in other parts of the world.

Begin in Oslo, one of the world’s northernmost capitals. While Oslo often gets ignored in favour of its Scandinavian brethren, Stockholm and Copenhagen, the city will surprise you with its combination of urban modernism and gorgeous natural landscape. Examine ninth century Viking longboats at the Viking Ship Museum. See if you can figure out why the new skyscraper district is colloquially called the “Barcode.” Hike the Norwegian capital’s many parks and hills before sampling the vibrant restaurant scene.

From Oslo, drive to Geilo, a ski resort midway across the country. Surrounded by rolling hills, Geilo is perfect for hiking in summer and skiing in winter. You can hike in the nearby Hardangervidda National Park or visit Hallingskarvet to see the Vargebreen glacier. The stunning Voringfossen waterfall is also nearby.

Continue from Geilo to Bergen, a majestic seaside town surrounded by seven hills and seven fjords. Bergen was an important seaport in the Middle Ages. It also served as the capital of Norway and a member of the Hanseatic League. Visit the famous colourful wooden buildings of Bryggen that line the harbour; they’re among the most gorgeous in northern Europe. But Bergen is more than Bryggen. Visit the home of Romantic composer Edvard Grieg, ride the funicular up Floyen Mountain or head north to see the Sognefjord, the longest and deepest fjord in Norway, which runs 205 kilometres long and can reach a width of four kilometres in parts.

From Bergen, head to Geiranger, a tourist village sitting on the end of the Geirangerfjord, often considered the most beautiful fjord in the world. Ride a ferry across the fjord and relish the green hills, deep blue water and open sky. On your way further north, stop for a view of the Seven Sisters Falls and drive the Trollstigen or Trolls' Ladder, which famously snakes up the mountains.

Alesund lies on a western coastal peninsula. Traditionally Norway’s main port for cod-fishing, Alesund suffered a fire in 1904 and was rebuilt in the Jugendstil or Art Nouveau style. The city remains one of the best examples of this flamboyant style. On the northern coast of Norway lies Trondheim, the centre of all things Viking in the country. It served as its capital until the early thirteenth century and remains a significant trading port to this day. Explore the city’s main Viking sites such as the statue of Leif Erikson and see Europe’s most northernmost cathedral, Nidaros Domkirke.

As you continue back south, you’ll see Roros, a world heritage site and one of the coldest villages in Norway. Roros was historically home to a copper mine and the village’s inhabitants still live in the charming wood houses that miners inhabited. Get up close to these homes dotting the hillside to appreciate their original log facades. Further south is Lillehammer, a gorgeous ski resort north of Oslo. Site of the 1994 Winter Olympics, the town is second-to-none when it comes to winter sports. Visit the Lysgardsbakken Olympic Arena or the open-air museum of Maihaugen. Visit the home of renowned Norwegian author Sigrid Undset, who lived here when she won the Nobel Prize in Literature in 1928. Enjoy the alpine landscape before returning to Oslo.

This extensive self-drive through Norway takes you through many of the country’s best sites and lets you appreciate its stunning, varied landscape.

Arrive Oslo - The Capital of Norway

On arrival into Oslo airport you will be met and transferred to your hotel.

After breakfast, collect your rental car at the Europcar office in Oslo and start your journey through the Hallingdal Valley on your way to Geilo, a charming mountain village. On this scenic drive, you will travel past steep ski hills, through beautiful forests and over plateaus with great views.

Geilo - Bergen, Hardangerfjord at its best

From Geilo, drive along the Hardangervidda National Park to the inner parts of the beautiful Aardangerfjord, with its spectacular views, on the way to Osoyro. You will pass the first glacier on your tour, Hardanger Jokulen, and visit the impressive waterfall, Voringfossen - the highest in Norway, with a cascade of 182 metres. From Voringfossen, you will continue through the dramatic and narrow Mabodalen valley, along Eidfjord, and end the day in Bergen.

Spend the day in Bergen. Bergen is a wonderful city, full of life and culture. In this "must-visit" city, you will find Bryggen, listed by Unesco as a World Heritage site; exceptional old houses; a vibrant fish and flower market; cable cars offering stunning views, great museums, dynamic culture, and more.

Drive the Fjaerlands Road to see Jostedal Glacier, "mainland Europe's largest icecap", and visit the Norwegian glacier museum. Then continue via Lake Jolster, Loen and Stryn to Hellesylt, where you will take the ferry on the lovely Geirangerfjord, which can easily be considered the most beautiful fjord in the world. Here you will find magnificent and impressive waterfalls, such as the Seven Sisters and Bridal Veil.

From Geiranger, you will drive up Ornevegen, or the "Eagles' highway", to Eidsdal, where you will take the ferry to Linge. Then head east for the dramatic drive up Trollstigen, the "Troll Ladder", which is one of the most visited attractions in Norway. After viewing the high mountains encircling Trollstigen, you will continue to the captivating town of Alesund.

Relax and enjoy the day in the fishing and ferry town of Alesund. The town was rebuilt in 1904 after a terrible fire, and is therefore distinctively different from any other Norwegian town, with its beautiful Art Nouveau architecture. The myriad of turrets, spires and beautiful ornamentation give the town its distinctive character, which is like something from a fairytale. Here you have the opportunity to visit the Atlantic Sea Park and enjoy the stunning views over the town from Fjellstua.

Drive to Vestnes and take the ferry to Molde, then head to the fishing village of Bud, which in the 16th and 17th centuries was the most important trading center between Bergen and Trondheim. You will take the Atlantic Ocean Road, with the vast and boundless ocean on one side, and majestic snow-clad mountain peaks towering on the other. Trondheim is the original capital of Norway, and until the 16th century, Trondheim was known as Nidaros. Here you will find Nidaros Cathedral, which is one of Scandinavia's largest buildings from the middle ages.

Today you will head southeast, close to the Swedish border, to explore the World Heritage-listed village, Roros. Roros is a beautiful gem with a charming atmosphere, lovely houses and delightful tiny streets and alleys.

From Roros, drive south to Lillehammer, the host town of the 1994 Winter Olympics. In Lillehammer, you can visit the Maihaugen open-air museum, the Olympic Museum and/or the Lysgardsbakken Olympic Arena.

Leave the Olympic village after you have seen and enjoyed all the best Lillehammer has to offer. On you way to Oslo, stop at Hamar to visit Vikingskipet, the impressive ice rink built for the Olympics. Enjoy the rest of the day in the capital. Spend the night at a hotel in central Oslo.

After breakfast you have the opportunity to do some last-minute shopping, visit one of Oslo's many museums or just relax at a café after this enjoyable holiday. You are then transferred to the airport for your onward or return flight.

From pricing is based on an estimated cost of 10 day car rental based on Economy VW Polo. Prices are subject to change due to the fluctuation of car rates until such time of deposit, when guaranteed prices are confirmed. Prices are “from” per person and based on twin share based on current exchange rates and subject to change. Single rates available on request. Subject to availability, limited seats available, seasonal surcharges may apply.