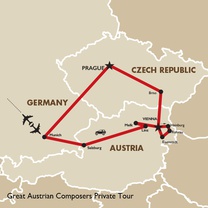 This 7-day Central Europe vacation follows in the footsteps of great composers Mozart and Haydn and takes you to Munich, Salzburg, Vienna, and Prague.

Your trip begins in Munich, the stately capital of Bavaria and one of the enjoyable major cities in Europe. This is the Germany of beer halls and romantic castles such as Neuschwanstein, easily visited on a day tirp to the Alps. Consider arriving a few days early if you want to spend time here however, as you'll depart for Salzburg on the first day of this itinerary.

Salzburg is the birthplace of Wolfgang Amadeus Mozart and Austria’s most beautiful town (don't repeat that in Vienna). Learn about Mozart’s life and times, visiting his birth home and the many monuments dedicated to his musical legacy. Afterwards, ride the funicular up to Salzburg Fortress and gaze upon the towering spires of the city’s gorgeous baroque buildings. That evening, attend a concert to hear one of Mozart’s symphonies or operas for yourself. The next day, head to Linz to tour the old town and visit the Mozart House where he wrote the Linz Symphony in three days. Continue to Melk to see the gorgeous Benedictine Abbey before reaching Vienna.

Vienna is Austria’s capital and, give or take a place or two depending on the year, the Most Liveable City in the World (don't repeat that in Salzburg). Erstwhile capital of the Austro-Hungarian Empire and home to the Habsburg Dynasty, Vienna is a treasure trove of historical wonders. It was also the home of Mozart and Joseph Haydn during key periods of their lives. On your first evening in Vienna, attend a concert at magnificent Schonbrunn Palace (optional), which was home to Maria Theresia and other Habsburg royals in the past. The next day, head on a city tour through the “City of Music” to see the stunning landmarks from Hofburg Palace to the Opera House to the Mozart and Haydn House, where you’ll learn about the music they wrote while living in the city.

While in Vienna, you’ll head on a city tour focusing on the city's musical history, including the lives of Mozart, Strauss, and Joseph Haydn. You'll see where each of the composers lived in Vienna, and of course, you'll see the famous Viennese Opera House, the enormous Hofburg, and much more. The tour might give you some ideas for how to spend your afternoon at leisure in classical music's spiritual home. The following day, explore Haydn's life in depth, starting in the town of Hainburg, where he took his first music lessons, and Rohrau, his birthplace. In the afternoon, visit Eisenstradt, where Haydn's professional career began in earnest.

After returning to Vienna for another night, cross the border into Czechia to Brno, the little sister of Prague and a gorgeous city of restored medieval and modernist architecture. It also happens to be where Mozart spent his most successful years. Continue to Prague, the City of a Hundred Spires and one of the most gorgeous capitals in Europe. The historical capital of Bohemia and one of the key cities of the Austro-Hungarian Empire, Prague has been central to so much of Central Europe’s history. It was also Mozart’s home during the height of his artistic powers. Tour the historic city centre to see the Powder Tower and the Old Square, where you’ll find the Town Hall and its gorgeous Astronomical Clock Tower, whose automatons comes to life each hour on the hour. Cross the Charles Bridge and spot the baroque statues that honour significant figures of the past. Consider extending your stay in Prague to explore all its historical wonders like Prague Castle.

In the morning travel to Salzburg, birthplace of the composer Wolfgang Amadeus Mozart. Visit the city in the footsteps of Mozart - the monuments and the birth house of the genius of music. Continue with the funicular to the fortress of Salzburg to enjoy the special atmosphere during a dinner and Mozart's concert, above the roofs of Salzburg.

After breakfast, trip to the St. Florian monastery with the famous organ "Brucknerorgel" near Linz. Continue to Melk to visit the Benedictine Abbey of Melk, the most representative baroque monument of Austria. Trip to Vienna, the capital of Austria and known by the composers Mozart, Strauss and Haydn. At night, you can attend a concert in the famous castle Schonbrunn (not included).

In the morning panoramic view of the city of Vienna. You can admire the Opera, the Hofburg Palace, the Heroes' Gate, the Parliament and the Town Hall. On this city tour, Mozart's, Strauss' and Haydn's life in Vienna is the central theme. During his 10 years in Vienna, Mozart reached his most outstanding creative aspects. Haydn lived 12 years in Vienna and composed much of his "old works" and Strauss was born and died in this enchanting city. Visit Mozart's, Strauss' and Haydn's house.

Travel to Hainburg, the place where Joseph Haydn went to elementary school and got his first music lessons. Visit the exhibition about the childhood and youth of Joseph Haydn. (Visit from June to December possible). Continue to Rohrau and visit Haydn's birthplace. In the afternoon, trip to Eisenstadt, where Joseph Haydn lived for many years as an orchestra conductor of the Esterházy family, creating most of his works. The walk in Eisenstadt takes you to the House of Haydn, the mountain church, the Franciscan church in the old town, with the baroque houses of the city, the town hall and the plague column.

After breakfast, trip to Brno, the little sister of Prague. The metropolis of Moravia, is the second largest city of the Czech Republic. Continue to Prague, the so-called city of a hundred towers. Mozart spent his most successful years of life here. Possibility of attending a concert at Villa Bertramka (not included).

In the morning, enjoy a city tour. Visit of the Powder Tower and the Old Square, which dominates the Town Hall with its Astronomical Clock, the impressive Church of Tyn and the Church of St. Nicholas. During the tour you can understand why Mozart dedicated a whole symphony to this city.