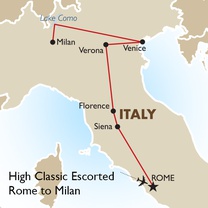 This 6-day escorted coach trip begins with an early start from Rome, taking you through the beautiful cities of Siena and Florence before exploring Italy’s north. See Verona, Venice, and the Northern Lakes before leaving the group in Milan.

Consider arriving a few days early to explore the sights of Rome on your own, as your first-class tour departs early in the morning for Siena. The city’s famed Palio horse race takes place each summer on Piazza del Campo, which you’ll visit along with Palazzo Salimbeni, and the cathedral containing works by Michelangelo, Donatello, and Bernini. Arrive in Florence by mid-afternoon, where you can opt to join a tour of the Uffizi or Accademia galleries.

The quintessential Renaissance city, Florence is one of the world’s greatest living art collections, besides being a fascinating and beautiful place to visit in its own right. Your guide will take you through the highlights of its historic back streets, including the Piazza del Duomo, Ponte Vecchio, the Piazza della Signoria, and more. Your tour won’t cover everything, but it will give you a solid orientation for an afternoon exploring on your own. Visit local craftspeople and artisans, or just soak up the beauty and history of Florence.

The following morning, depart for Venice, with a stop in Verona en route. Yes, you’ll see the ‘Juliet balcony’ on your city tour, but the city’s real highlight is an arena dating back to 30AD that is still in use for concerts today. Opera fans will also note the former home of Maria Callas, before going on to Venice. The city of canals is one where a little help with orientation goes a long way. Your local guide will point out major sights including the Doge’s Palace before taking you through the back streets for a taste of Venice away from the tourist crowds. There’s unfortunately no avoiding them on the Rialto Bridge, but by then, you’ll likely be too enchanted by Venice to care.

Set out for Northern Italy’s lakes, beginning with the town of Sirmione, on Garda Lake. Visit Scala Castle among other highlights of this historic town before an optional boat tour to the Grotte di Catullo. The region’s gem is Lake Como, where you can stroll through centuries of history from Roman times through the Romanesque and Baroque periods.

With a taste for the finer things, your final stop is Milan, the world’s capital of style, where a sightseeing tour takes you to Sforzesco Castle, Piazza Mercanti, La Scala, and the awesome Duomo. Enjoy one final dinner (or last supper?) with the group, then depart the following day. Or linger in Milan an extra day or two to see what Italy’s capital of fashion and finance is all about.

An early 8:00am departure from Rome, you will meet at the designated meeting point (hotel pick up available upon request) and depart by deluxe coach to Siena, the beautiful medieval city renowned for the Palio horse race.

Discover the street, Palazzo Salimbeni, which is now used as the headquarters for the Banca Monte dei Paschi Di Siena. Visit the main square of the town, Piazza del Campo, a beautiful seashell shaped square, where the famous Palio horse race is held every year on July 2nd and August 16th.

Don't miss the chance to discover the impressive facade of the Cathedral dedicated to the Virgin Mary, covered with colorful local marble, where several artists such as Michelangelo, Donatello, and Bernini have work.

Before you go, don't forget to taste the typical local dishes such as "Pic", homemade pasta, and the almond biscuits "ricciarelli", symbols of the town. Arrival in Florence around 2:00pm, and after check-in at the hotel, possibility to have an optional tour of the Uffizi Gallery or Accademia Gallery.

Welcome dinner in a local restaurant to taste a typical Tuscan menu.

After breakfast, meet the local guide and visit the fascinating backstreets of mysterious Florence: from Piazza del Duomo, with its Baptistery and Santa Maria del Fiore Cathedral, to Ponte Vecchio; from Piazza della Signoria with its Palazzo Vecchio and Loggia dell'Orcagna, up to the central avenues paved with stone, where you'll find authentic masterpieces whenever you direct your gaze. An intense and concentrated tour in the very heart of Florence that will introduce you to the many wonderful "must see" places of interest.

Free time for lunch and then, in the afternoon, your tour leader will take you to see excellent traditional local producers: visit one of the most famous jewelers where you can admire the collections of a Florentine goldsmith master; walk around San Lorenzo's leather market that offers high quality products made with high-grade leather. Processed according to the most traditional methods, it gives life to the classic elegance of Florentine leather bags, wallet, shoes and jackets that represent the essence of local artisan creativity.

After breakfast, depart for Venice. Along the way you will stop in Verona. Explore the streets of this historical center, that was proclaimed a UNESCO World Heritage-site. Be enchanted by the gem of the city: the ancient Roman Arena (outside). Built in 30 AD, it is very well preserved and in the last century has hosted over 30,000 people for international music concerts, including the Verona Arena Festival, a summertime opera celebration that draws classical music lovers from all over the world. After taking some photos of the arena, head to the former home of famed opera singer, Maria Callas. Then move on to Juliet's House (outside), the structure that inspired Shakespeare's Romeo and Juliet.

Wander back to Piazza Bra and time for lunch. Proceed to Venice. Travel by boat until Saint Mark's square where you will meet a local guide who will introduce you to the most important buildings such as the Doge's Palace, the Campanile, the Clock tower and the Library. Here you'll be told about the birth of the city and its glorious history. Walk in hidden Venice, admiring its alleyways, lovely canals, picturesque campos (squares) where everyday life takes place and explore the structure of the city.

Arrive at the Rialto Bridge over the Grand Canal, the heart of the city, with its bustling market area.

At the end of the visit there is a lovely walk to your hotel for check in. After, you will have a typical dinner in a local restaurant.

After breakfast, enjoy a ride across the the Venetian Lagoon to the colorful island of Murano with your tour guide.

Here you will get an inside peek into the world-famous glass-blowing factories of the island. Watch a glassmaking demonstration from a master craftsman and enjoy time to browse the factory showroom, featuring finished works of art.

Return to St. Mark's Square for an afternoon at leisure and time for shopping and private visits.

Check out of your hotel then depart for Sirmione, known as the Pearl of Garda Lake, "the gem of all the peninsulas", as the poet Catullus wrote. The visit to the village starts with the spectacular Scala Castle dating back to medieval times. It was built at the end of the 13th century by the Lords of Verona. Wandering along narrow medieval streets one reaches the Parish Church of S. Maria which houses many images and paintings to be admired, together with di erent altars and precious 18th century works of marble. Slightly uphill, one reaches the S. Salvatore Church, which dates back to the 8th century.

Optional boat tour to admire the park of the prestigious and luxurious 5-star Hotel Villa Cortine and the nearby Villa of Maria Callas, from here you will reach the entrance to the Grotte di Catullo. It is the most important archaeological area in the entire region of Lombardy, with imposing remains of what was once a luxurious Roman Villa on the edge of Lake Garda.

In the afternoon, proceed to Como Lake where your tour leader will walk you around all the historic highlights. As we stroll through the ancient streets in the heart of the town, surrounded by Roman walls, we can admire beautiful Romanesque and Baroque churches, Piazza Volta and Piazza Duomo, with its charming old Town Hall building, called Broletto, with its characteristic bell tower and the superb 600-year old Cathedral.

Depart to Milan where you can enjoy a panoramic tour to see: Sforzesco Castle, the medieval Piazza Mercanti and Piazza della Scala, admire the marble facade of Milan Cathedral and the Galleria Vittorio Emanuele II, one of the oldest shopping malls in the world. Your tour ends in the historic Piazza del Duomo.

In the evening check in at hotel, dinner and overnight at the hotel in Milan.

After breakfast, check out of your hotel.