Discover Bologna on this premium stay in the city. Start with a private walking tour starting at the Piazza Maggiore and its famous monuments, palaces, and churches. The next day, get off the beaten path outside the city as you explore La Certosa on a bike tour, seeing its gorgeous sculptures and enjoying the peaceful surroundings. 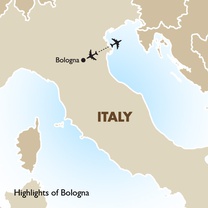 This 4-day Italian vacation showcases the city of Bologna.

Your trip to Italy is all about Bologna, home to the world’s oldest university and famous as the birthplace of Bolognese. Known for its fabulous food and gorgeous Renaissance palaces, Bologna is a wonderful city to explore. Staying at a premium hotel in the heart of the city, you’ll spend your vacation exploring Bologna’s artistic heritage. One day, you’ll head on a walking tour through the historic city centre, starting in Maggiore Square and passing by several of the city’s most famous buildings, including the Palazzo Re Enzo and the Basilica di San Petronio, with its gorgeous incomplete façade. You'll also see the Archiginnasio, the 16th-century palace that was once home to the world’s oldest university, the Benedictine Monastery in the “Holy Jerusalem of Bologna,” and a 1,600-year-old Byzantine church. The next day, head just outside of Bologna to explore La Certosa, also known as the Historic Monumental Cemetery. Join an expert guide and bike through the cemetery that is the resting place of many of Bologna’s greatest artists. As you cycle through the open-air grounds, you’ll learn about the lives of these painters and sculptors and see some of their greatest artworks.

At trip’s end, head to the train station to continue your onward journey.

The Art Hotel Novecento is a 4-star boutique hotel located in Piazza Galileo, in the historical center of Bologna, just a few steps away from the wonderful Piazza Maggiore. The original building dates back to the beginning of the twentieth century and has been completely refurbished and opened in 2003. This charming hotel has 27 elegantly furnished rooms and is the perfect base for both business and leisure travelers visiting the magnificent city of Bologna, with all the sights and attractions just a short walk away: monuments, theatres, restaurants, exclusive shopping and eno-gastronomical areas.

This private tour of Bologna will take its visitors on a historic and artistic experience. Bologna has a number of nicknames including 'la dotta' (the learned), for its ancient university, 'la rossa' (the red), for the warm colour of its roofs and houses, and 'la grassa' (the fat), for the wonderful food. The heart of Bologna is the Maggiore Square. This airy, open space 'piazza' is lined with the city's most important buildings incluing the Palazzo d'Accursio, the prestigious seat of the city's governing body with its majestic halls that are decorated with works of enchanting beauty. Other sights are the Palazzo Re Enzo ,the city's sinister medieval prisons, the Palazzo del Podestà and the majestic Basilica of San Petronio. The Basilica's uncompleted façade shows the sweetness of the Madonnina by Jacopo della Quercia. Enjoy masterpieces of Italian art in paintings, sculptures, and glass from the Middle Ages and the Renaissance. You will also see the elegant Fountain of Neptune, the Palazzo dei Notai and the imposing Palazzo de' Banchi.

The tour also takes you to the elegant 16th-century building, the Archiginnasio, Europe's oldest University. Walk through busy narrow alleyways of the food market until you reach the Palazzo, known as the Holy Jerusalem of Bologna for its symbolic connections with the sites of the Passion of Christ. There is still a Benedictine monastery whose origins go back to the dawn of Christianity. There is also a Byzantine church almost 1600 years old, a Romanesque church and an atmospheric crypt as well as two cloisters of matchless beauty.

Just a few kilometers out of the city, you will visit the Historic Monumental Cemetery, also known as La Certosa. This shared tour is led by a professional guide to discover Bologna's finest artists from the 18th and 19th centures and the various artistic, literary, architectural and intellectual periods including Romanticisim, Neoclassicism, Realism, Rationalism and much more. Following the bike path up to the Cemetery, you will also stop in front of the main paintings and sculptures featuring the work of renewed Italian artists. Enjoy the vast open-air grounds, peaceful surroundings and fascinating sculptures, monments and architecture.