FIRST-CLASS | TAILOR-MADE: Embark on a 10-day tour of the Loire Valley and Bordeaux and discover France’s celebrated history and main sites of interest. Starting in Paris, cruise the Seine, climb the Eiffel Tower, and Skip the Line at the Louvre. In Tours and Bordeaux, visit wineries, see chateaux, and enjoy local delicacies. 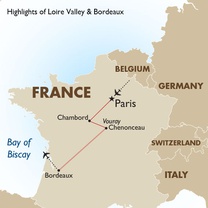 This 10-day French vacation takes you to Paris as well as the Loire Valley and Bordeaux to explore French history and culture. It features first-class and deluxe accommodations, small group tours, and is a great introduction to France.

Your journey begins in Paris, the French capital and one of the most beloved cities in the world. A Paris Seinorama tour will introduce you to many of its most famous landmarks. Travel through the city in an air-conditioned panoramic bus and see the sites, including the Pantheon, Luxembourg Palace and Gardens, Arc de Triomphe, and Les Invalides. Disembark at the foot of the Eiffel Tower and board an hour-long cruise along the Seine to see Notre Dame and the Louvre from the water. Return to dock and ride up to the second floor of the Eiffel Tower to enjoy the best views of the city. The next day, you’ll skip the line at the Louvre to see some of the world’s greatest artistic masterworks, including the Mona Lisa and the Venus de Milo.

From Paris, ride the train to Tours, where you’ll be based for a few days in the Loire Valley. One day, travel back in time at two lovely chateaux in the Loire Valley. Explore the Chateau de Chambord and the Chateau de Chenonceau in the company of a local guide, who will explain the fascinating history behind these gorgeous Renaissance buildings. The next day, head on a half-day wine tour to Vouvray to visit a traditional vat room, learn about the region’s specific terroir, and enjoy a wine tasting in some troglodyte galleries carved into the earth.

Ride the train to Bordeaux and discover the secrets behind a city that captures the French “Art de vivre” like few others. Head on a gourmet small group tour of the city to visit local bakers, chocolatiers, and cheesemakers, tasting some delicacies as you go. End the tour with a chic lunch at Bordovino’s Apartment in a stunning 18th-century building. The next day, tour the famous wine region of Saint Emilion, exploring the UNESCO-listed village and tasting some local vintages at Classified Growth Chateaus.

At the end of your stay, you’ll depart Bordeaux to connect to your onward destination.

The Elysees Bassano hotel is located right in the heart of the capital, midway between the world-famous Avenue des Champs-Elyees and the iconic landmark of the Eiffel Tower. Enjoy a stroll along the Avenue Montaigne and the Avenue Victor-Hugo, just a 5-minute walk from the hotel. The building, constructed in the 19th century as a private mansion, has been fully renovated and now offers 40 comfortable air-conditioned rooms in soothing shades of beige.

Take a tour by air-conditioned panoramic coach and enjoy the opportunity to see Paris and learn about its history and most famous sights through an audio guide commentary. Marvel at Paris's best-known sights: Place Vendome Square, the Opera House, the Pantheon, the Luxembourg Palace and Gardens, the Orsay Museum, Place de la Concorde Square, the Champs-Elysees, the Arc de Triomphe (Arc of Triumph), and the Invalides.
At the foot of the Eiffel Tower, step aboard for an hour-long musical cruise along the Seine with an audio guide. Marvel at the amazing architecture of the heart of Paris's most prestigious monuments lining the banks of the Seine: the Louvre Museum, Notre Dame Cathedral, the Orsay Museum, the Conciergerie. Then, with your priority access, skip the line and speed up by elevator to the 2nd floor of the Eiffel Tower, Paris's most unmissable monument. This tour ends at the Eiffel Tower.

Your priority access ticket will allow you to follow your guide straight into the world's largest museum. No need to stand in line! This guided tour offers the perfect opportunity to learn about the museum's huge collection and its greatest works of art, such as the Mona Lisa, the Venus de Milo, and the Coronation of Napoleon.

Before it became a museum in 1793, the Louvre had long been one of the principle palaces of the Kings of France. Located right in the heart of Paris, the Louvre's galleries stretch for 786,000 square feet. It is home to the world's largest collection of art works, spanning more than 7,000 years from ancient civilizations to the 19th Century. The museum's collections are split into eight different departments: Egyptian antiquities, Greek, Etruscan &amp; Roman antiquities, Near Eastern antiquities, Islamic art, Paintings, Sculptures, Decorative Arts, and Prints &amp; Drawings.

Spend time discovering these collections with your guide, who will show you some of the museum's most famous works and tell you about the stories that lie behind them. Marvel at the Mona Lisa, painted by Leonardo da Vinci in 1506, one of the most famous female portraits in the world; the Venus de Milo, a celebrated Greek sculpture dating from 100 BC depicting the goddess Aphrodite; or the giant 33-foot-long painting of the Coronation of Napoleon, painted in 1807 by Jacques-Louis David to commemorate the crowning of Napoleon Bonaparte in Notre Dame Cathedral.

After your guided tour, spend time exploring other parts of the museum at your own pace.

Chateau Belmont by The Crest Collection

World Heritage of Unesco - Tours - ancient Gallo-Roman city - is classified as a city of art and history. Its proximity to Paris - its location in the center of the famous Loire Valley - its rich heritage tourism - and its quality of life - gastronomy - entertainment and events make this city of Touraine an ideal holiday destination.
Guests staying at Chateau Belmont can choose between cleverly designed Residence Rooms and Suites ideal for business travellers and famillies and romantic Rooms in the castle for couples.

Jump into the heart of French history and visit two must-see chateaux of the Loire Valley. Let yourself be guided by your local guide who will share its secret anecdotes with you! Enjoy a guided visit of the exceptional Chateau de Chambord and get ready to travel back in a time of the French Renaissance! The Chateau de Chambord is the largest and most majestic castles of the Loire and the symbol of the French Renaissance. After lunch, continue the day with the discovery of a family-owned chateau where the owners still live. Your day ends with a guided visit to the unique Chateau de Chenonceau and its stunning gardens with a view on the river. Take a French aperitif with local products at a secret spot before driving back to the hotel.

Half Day Wine Tour to Vouvray

Start this half day tour with meeting a genuine French winemaker in a charming family-run estate. Visit the traditional vat room where hundreds of barrels are lined up (bring your coat, it is freezing in the vat room). You will improve your knowledge regarding wine-making and of course wine-tasting. The terroir of this wine area and its main grape variety of Chenin blanc allows the production of elegant white wines, dry, sweet or sparkling.

After this, your guide will drive you to a grand wine house situated just along the Loire River. Stroll inside its impressive troglodyte galleries. Dug in the hills, these underground tunnels are part of Loire Valley's historical heritage. Discover all the secrets of elaboration of the wines from this ancient historical house, still using the "methode traditionnelle". Have a lovely French aperitif paired with local food to complete your half day tour to Vouvray.

Located in the heart of Bordeaux, the Burdigala Hotel was completely refurbished in summer 2011, and its elegant yet relaxed atmosphere provides a welcome sanctuary from the hustle and bustle of the city. Whether traveling for business or leisure, come and enjoy the "urban chic" and warm welcome for which we are renowned.

Welcome to Bordeaux, a city that enjoys the French "Art de vivre" - history, traditions, architecture, wine, and food. This small-group excursion is a gourmet city tour that will take you to the most distinctive producers of local delicacies. You will enjoy visits and tastings in a bakery, a chocolate shop, and a cheese shop. You will end the tour by having a casual and chic lunch at Bordovino's Apartment in an 18th-century building.

Today, enjoy a full day exploring the Saint-Emilion wine region. This wine tour is a perfect introduction to both the wines of the right bank and to the charming village of Saint Emilion, a UNESCO World Heritage Site since 1999. Your tour will include visits and tastings to three carefully selected Classified Growth Chateaus/wineries known for the quality of the wine they craft as well as a walking tour of the village with your guide.