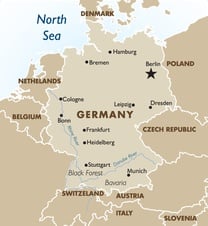 Spend 4 days immersed in Hamburg’s musical history. With tours focused on the live music scene both past and present along the lively Reeperbahn, you’ll have your days at leisure to explore the best of today’s Hamburg.

The cultural and media hub of northern Germany, Hamburg is most famous for its enormous port. But there’s plenty to discover on dry land here too. Begin with a romantic cruise on the city’s canals to get your bearings, then enjoy two days at leisure in Germany’s second largest city. Devote some time to the enormous HafenCity, home to the impressive (and controversial) Elbphilharmonie concert hall, Miniatur Wunderland, where you can see the best of Europe shrunk down to table size, and Hamburg’s top-notch International Maritime Museum. You can also stop by the sobering memorial of St Nickolas Church, and learn about the firebombing endured by Hamburg in World War 2.

The city also has a bold creative history. Hamburg is a city of sailors, filled with the things sailors typically like. Nowhere is this truer than on the Reeperbahn, where you’ll enjoy an eye-opening 2-hour tour of the city’s more hedonistic side. This is also where The Beatles first cut their musical chops. By all accounts, they weren’t very good at the time, but Hamburg’s many live music clubs still argue over who gave the Fab Four their ‘big break.’ You can decide who to believe on a Beatles tour of the St Pauli district.

Being only minutes from the city centre by public transportation, this hotel enjoys a central location with easy access to all city attractions. Bars and pubs, and restaurants are a short walk away. Facilities include a lobby with 24-hour reception, hotel safe and lift access. Business travellers will appreciate the WLAN Internet access and guests may use the room and laundry services (for an additional fee), and there is a covered garage (charges apply).

Bask in the magic of the Alster and its northeastern canals in the light of the setting sun. On this two hour shared experience, you'll first head to the departure point for this excursion, board your vessel then chart through the beautiful canals of Hamburg, catching unrivalled views of the beautiful gardens and parklands that can't be seen from the road. An excellent activity to round out your day, this twilight boat cruise is not to be missed.

After meeting your guide, you'll set off on foot from the Landungsbrucken with like-minded guests to visit what is known locally as "the most sinful mile of the world", the Reeperbahn. Prostitution, striptease and nightlife have been the hallmarks of this district for quite some time and you'll see a few of the areas prominent highlights including Schmidt Theatre, the Operettenhaus and St.Pauli Theater, all while taking in the subculture of the Reeperbahn. Pass by the Herbertstrasse, a place where prostitutes have offered their services since at least 1900. An unwritten law of this street says: "No entrance for women!" Having passed the prostitution of the Davidstrasse, your guide will lead the way to the Hans-Albers-Platz with its life-sized bronze statue of Hans Albers. Here you'll discover an area characterized by live music and dancing in the bars and clubs. Onward, you'll now visit the most well-known side road of the Reeperbahn, the Grosse Freiheit. This street features the new designed Beatles place, the world-famous Dollhouse and the Safariclub, known for its exotic dancers - many considered to be among the best in the world. You'll also have the chance to take a peak at the remains of the Star Club, most famously known as the venue in which the Beatles became superstars. Toward the end of your tour, stop for an original Hamburg short drink (included) in the restaurant Da Mingo or the One-O-Two-Bar, which will tune you into a very personal exploration of this most sinful of miles.

The Beatles in Hamburg

Discover the world of St. Pauli in the early 60s, wild scenery of seamen, barmaids, female mud-wrestlers, rockers, and the "Exis", the place where the Beatles "grew up", as John Lennon put it. With charm and a wink, the guide tells stories and anecdotes of the Fab Four's wild Rock'n'Roll life as she leads you to all the original sites of early Beatles history - the clubs, photo locations, hidden backyards, seedy lodgings. There is no place in the world where the Beatles played more than in Hamburg! This whirlwind tour will showcase many Fab Four highlights over the course of two exciting hours.