FIRST-CLASS | PRIVATE-GUIDED: You're invited to discover the best of Lithuania and Latvia on this privately-guided program which showcases Vilnius and Riga - two gorgeous capitals that have maintained a low profile in the international travel scene - accented by exciting countryside excursions dotted throughout. 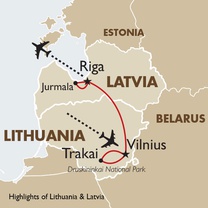 This 6-day trip begins in the Lithuanian capital of Vilnius, staying in the stunning Baroque former residence of the noble Pacai family. Then spend two additional nights in Riga, enjoying all Latvia has to offer.

Settle into Vilnius on your first day and acquaint yourself with Lithuania. A private guide meets you for an excursion to Druskininkai National Park and Grutas Park. A sculpture park with controversial holdovers from the Soviet era is the centrepiece of Grutas Park, a unique and sometimes confronting look at Lithuanian life under Soviet rule. After lunch, enjoy a spa break at Druskininkai, with time to explore the attractive town centre before returning to Vilnius. Lithuania is also a crossroad of lesser known cultures including the Karaite, who brought their traditional cuisine from Crimea to Lithuania. Learn more about them in Trakai near Lake Galve, and explore their culinary traditions through a cooking class.

Your accommodation in Riga is in a 400-year old boutique property in the centre of Riga’s old town, a short walk from the city’s famed Art Nouveau buildings. It’s the perfect base for exploring this charismatic city. Pass through the Swedish Gate, see the colourful House of the Blackheads, and don’t forget to look up to glimpse the feline guardians of Cat House, A half day tour takes you to Jurmala, Riga’s favourite summertime beach resort.

This stunning Baroque palace and former residence of the noble Lithuanian Pacai family dates back to 1677. In its palace days, it witnessed the times of Lithuanian-Polish Commonwealth, the rule of Russian tsars and Napoleon who famously addressed the Vilnius townsfolk from the balcony in 1812.

Having undergone a complete renovation in 2018, the hotel combines the noble traditions of earlier centuries, its bon-vivant lifestyle and historical architecture with vibrant modern design. It enjoys the most sought-after location in the heart of the Old Town, its main entrance being right on Didzioji Street, an elegant street filled with high-end boutiques, restaurants and embassies. The stately facade of the property, with its famous balcony, faces the street and the key landmarks of the city are, literally, a couple of minutes away.

The hotel's public spaces and rooms are handsomely designed in a blend of deep grey walls and tufted leather finishes, surprising guests with wall portions of original bricks and barn timber and patches of ancient frescoes. This is the perfect place for couples seeking contemporary, five-star luxury in an authentic historical building.

Enjoy a private day excursion that combines a theme park based on Soviet-era 'exhibits' with a visit to Lithuania's principal health resort, paired with truly wonderful scenic stops on the way. Ideally, you should let your guide pick you up from your hotel in Vilnius by 9am and take you on a lovely drive to your first stop, the Merkine Observation Tower. The tower has an intriguing structure: even though made of metal, it seems to become one with the surrounding forest, as if to blend in with the canopies of the trees. From the top, it offers breathtaking vistas of the seemingly endless twists and turns of the Neman River and closer by, part of the Old Town of Merkine and the bridge across the river.

Your drive continues to Dzukija National Park, which includes Cepkeliai Marsh, the largest swamp in Lithuania. Where time and weather permit, you will have a chance to explore part of the marsh on foot. Then it's time to see Grutas Park, possibly the world's most controversial socialist sculpture park, sometimes referred to as 'Stalin World', which is definitely not its official designation. A quick note about the park's creation: At the end of the Cold War and the break-up of the communist regimes in Eastern Europe, countries were left with those regimes' legacy by way of sculptures and statues. In most places, the radical solution was to get rid of them. So too in post-Soviet Lithuania. Some statues were destroyed, simply moved out of general view, or relocated to other places, even to Budapest. A private businessman and millionaire, mushroom magnate Viliumas Malinauskas, had the idea of rescuing these unwanted works and putting them together on his estate in a remote corner of the country. They became the backbone of what is today Grutas Park. The exposition, consisting of 86 statues by 46 different sculptors, have been distributed thoughtfully across 20 hectares of forest with many features that re-create Soviet Gulag prison camps: wooden paths, guard towers, and barbed-wire fences. As soon as you arrive at the entrance, you're greeted by a mock watchtower and barbed wire. Past the ticket office is a short freight train, meant to evoke memories of deportations. Prepare for an unexpected and bizarre moment when you see animals such as a zebra and a kangaroo roams around in a pen opposite the first giant statue by a pond.

The museum, however, brings you back to reality. The exhibits can be graphic, though, as the park is also geared toward family outings, reaches beyond dark tourism. For countries grappling with their unsavoury the park offers an alternative model to city museums or the destruction of historical artifacts.

Lunch (not included) can be either at the park or the spa town of Druskininkai, your last stop before returning to Vilnius. Deriving its name from the Lithuanian word for salt, today's Druskininkai is an international, year-round, mineral water, mud and climate therapy resort. Host to some startlingly unique architecture, you can see a 19th-century wooden Russian Orthodox church as well as a handful of experimental Soviet-era hotels and sanatoria. The town can also claim two past great artistic residents in the sculptor Jacques Lipchitz and the artist and composer Mikalojus Konstantinas Ciurlionis.

After a brief stay in town, you have a couple of hours to reflect on the day while driving back to Vilnius. This excursion is perfect for travelers interested in more recent history but can also appeal to families with teenage children.

Excursion to the Medieval Capital of Lithuania with Kybyn Cooking Class

Discover the city that was Lithuania’s medieval capital at the end of the 14th century, when it was the largest country in Europe, on this private tour to Trakai. It’s a visually delightful place and home to the Karaite people, an ethnic minority with Turkic roots that brought their traditional cuisine from the Crimea, a taste of which is part of today’s experience.

Your day starts with your guide picking you up at your hotel in Vilnius for the short 45-minute drive. You’ll soon realize that three colors sum up the gorgeous national park that protects the city and its peninsula: the green of the forests, the blue of its 32 lakes and the red of the bricks with which Trakai’s famous Island Castle was built. The castle, surrounded by Lake Galvė, has 20 islands, and it is magnificent. The construction of the castle was started by Grand Duke Kęstutis of Lithuania, and completed by his son Vytautas in 1409; for a long time, the majestic castle served as a royal residence for the Grand Dukes of Lithuania. While its structure appears to be simple, it was considered a masterpiece of medieval defensive architecture and was the only castle built on water in Eastern Europe. You can enjoy walking around the ancient castle grounds and admire its austere interior or the many intriguing items on display in its museum. The close to 400,000 exhibits include collections of coins, medals, ancient maps, hunting trophies, dress jewelry, and valuable oil paintings.

The promised taste of traditional cuisine follows at a legendary restaurant, The Old Kybyn Inn. Open since 1979, it continues to cherish old Karaite traditions, especially the baking of Kybyns. Stuffed with anything from chopped mutton, beef, pork, mushrooms, vegetables and even chocolate this dish has retained its popularity since one of the Grand Dukes brought Karaites from the Crimea some 600 years ago. The restaurant was the first to get certification by the Culinary Heritage Fund for the authenticity of its recipes for Karaite bins. The fun part of this trip is when you fold and plait Lithuanian dough in the workshop to create your Kybyn, gaining an understanding of the somewhat curious cooking process.

After lunch, and before you return to Vilnius, you can enjoy a magnificent view over a landscape filled with forests and lakes, the majestic Trakai castle and other gems from the Hill of Angels. This area hosts over 40 magnificent sky-greeting wooden angels of all sizes as well as the oak road crosses with sculptures of saints on them. The oak angel sculptures were created by Lithuanian and foreign artists, joined in 2017 by the Angel of Librarians, which was made from metal. Today, the Hill of Angels is also referred to as the Path of the Millennium Signs, a place to enjoy the scenic beauty and appreciate the spirituality in the air. This is a great trip for families or couples of all ages.

The family-owned, boutique apartment hotel and restaurant Neiburgs is an Art Nouveau property located in the heart of Riga's Old Town. The Old Town was declared a UNESCO World Heritage Site, offering you an opportunity to explore the quiet beauty of the meandering streets and some of the most iconic buildings in the city. The stately Riga Cathedral is right next door, while many other key attractions are within a five-minute walk.

The hotel itself is an elegant fusion of the historical and modern. All apartments are elegantly furnished and offer breathtaking views of the Old Town and the left bank of the Daugava River. Filled with lots of light, each room has a personal touch, such as original graphic art by Katrina Neiburga. She is not only a representative of the family but a world-renowned, contemporary, multimedia art installation and set designer. This is a perfect choice for urban travelers of all ages that are looking for style blended with history.

Tour to Jurmala starts in Riga from hotel reception with private guide and after 20 minutes drive by car/minivan to Latvian favorite summer time vacation town of Jurmala, the vibrant Latvian sea resort, famous with its numerous fantasy-like wooden summer houses architecture on Jomas Street and strolls over 40 km near great sandy beach of Baltic Sea with its wooden, the SPA's and health temples which are facing the white beach, where historically rich and the aristocracy have come for more then a century, enjoyed the calm tranquility of this place and took a walk next to the beach with chance to finding the amber, later return back to Riga.