Highlights of Ljubljana and Lake Bled

FIRST-CLASS | PRIVATE-GUIDED: Visit Slovenia on a weeklong trip and immerse yourself in the spectacular scenery and warm, charismatic culture of this Adriatic gem. Stay in first-class accommodation, enjoying history, beer, and cycling tours. Then kick back as the time is yours beside the beautiful, cobalt-blue waters of Lake Bled. 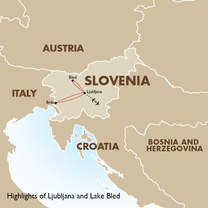 This 7-day trip takes you to the highlights of central Slovenia, focused on the beautiful capital, Ljubljana, and Lake Bled, one of the country’s greatest natural treasures.

Start with a half-day tour of the capital with a small group, learning about its 3,000 years of history and admiring its Baroque and Art Nouveau architecture. Visit the Central Market and enjoy a taste of local specialties in one of the city’s restaurants. Take in the view from Ljubljana Castle after riding its famous funicular. Then enjoy a half day Beer Experience, learning about the traditions of Slovenian brewing dating back to the 16th century. Taste seven different beers produced by the five local breweries.

Hipsters unite! It’s time for your Moustache Tour by Bicycle! Just kidding. Everyone is welcome on this biking history tour of Ljubljana. It’s just that many of the tour’s subjects were moustached famous men from the city’s history. Visit the room of architect Joze Plecnik, writer Ivan Cankar’s favourite bar, and a number of stops showcasing Slovenian delicacies and treats. The following day, enjoy a privately guided excursion to one of Slovenia’s most attractive regions, Goriska Brda. Enjoy the Mediterranean flavours unique to Slovenia, including its exceptional wines. Besides the spectacular scenery, this day is a foodie’s delight.

Then it’s on to Bled, for two nights in this picturesque lakeside region. Your time here is entirely at leisure, so take Bled at your own pace. Take a boat to the central island and ring the bell for luck, or hike to the top of Bled Castle for spectacular views before returning to Ljubljana for your onward journey.

Hotel Cubo is located in a historical building and is under protection of the Cultural Heritage of Slovenia. Long standing Luckmann dynasty has owned the building on the corner of Slovenska street since 1786. Now, the hotel is capable of providing all the services of large hotels, but with a distinct, intimate atmosphere that can only be created by a small property where the staff can pay special attention to each and every guest.
Restaurant Cubo located on Smartinska cesta has been one of the favourite spots for gourmet dinner or lunch for business guests, foodies and everyone appreciating a culinary art of combining selected dishes and culinary approaches from around the world, including those of traditional Slovenian cuisine.

This shared walking tour starts in front of the Town Hall, where your guide is waiting for you. During the summer, the meeting time is 10am. Ljubljana is easily one of Europe's best-kept secrets, looking back on a vibrant history that traces 3,000 years of Roman, Medieval, Baroque and Italian influences. Today, it is a friendly and cosmopolitan place and your tour takes in many of the major attractions over the next two hours. You'll see a lot of its unique architecture, much of it a legacy of the Baroque and Art Nouveau periods and, most notably, the work of the famous 20th-century architect Joze Plecnik.

One of the highlights is the Triple Bridge, the central part of three separate bridges, which is close to the bustling Ljubljana Central Market colonnade. Wandering the cobblestone streets of the Old Town reveals a bright cafe society with atmospheric bars and restaurants and you have an opportunity to some traditional Slovenian dishes as part of a brief tasting session in one of the city's restaurants.

From the Old Town, you connect to Ljubljana Castle riding on a modern and unobtrusively designed funicular. Built in the 15th century, this is the city's most impressive castle and while the views from the cable car are fabulous, wait until you reach the top and stand on the castle's ramparts. At the top of the viewing tower, they are even more beautiful.

This shared 'Beer Experience' offers you an opportunity to taste a variety of local beers while learning about Ljubljana's long tradition of brewing. The earliest known brewery in Ljubljana dates back to around 1592, and by 1796, the city had six breweries. Admittedly, there seems to have been some sort of lull in the 200 years between. In recent years, the popularity of craft beers made by different microbreweries in Ljubljana and surrounding areas has, however, seen rapid growth and received high marks from travellers. The tour promises a great evening of interesting conversation, cool facts and even greater beer.

During the tour, you'll visit five different drink outlets and taste seven different beers made by five different breweries, two based in Ljubljana and three in other parts of Central Slovenia. On top of that you'll visit the Brewery Museum, set up by the Pivovarna Union brewery, where the popular Union beer has been brewed since 1864, and round off your experience at the Pivnica Union pub. While the actual beers served might change, Mali Grad from a brewery in the town of Kamnik and an IPA from the Human Fish Brewery received notable mentions. Anyone who has visited Slovenia's amazing Postojna Cave, knows of course that the human fish is also a unique resident of the cave, namely the olm, an aquatic salamander.

During the summer the tour starts at 6:00pm at the Slovenian Tourist Information Centre on Krekov trg 10, Ljubljana. Please note, this tour is only suitable for people aged 18 and over. This is an excursion promising a lot fun. It will, naturally, appeal to anyone interested in the world of beer.

Architect Joze Plecnik, writer Ivan Cankar and painter Rihard Jakopic, were daring men in their own way, and mustachioed. By all accounts, they also rode bicycles. On this privately guided bicycle tour through Ljubljana, you'll examine some of its secrets through the lives of the three men who left their mark on Ljubljana and Slovenia as great artists. The Moustache Tour includes visits to the architect's visionary room, the writer's favourite bar and the painter's National Gallery while the atmosphere of an authentic retro barbershop somehow swirls above and around it the entire time.

Also included are three 'clues' from each of the historical men for you to discover, as well as traditional Slovenian refreshments (including a slice of potica, a kind of nut roll pastry, and coffee or tea) and a mysterious 'mustachioed' surprise at the International Centre of Graphic Arts. Apart from these very unique stops you are, of course, going to see Ljubljana's cobblestoned Old Town, picturesque bridges and intriguing sculptures of dragons.

The official word is that you don't have to have a moustache to take the tour. This is an exceptionally unique tour that should appeal to travellers interested in alternative ways to explore a city.

Enjoy a day travelling on a privately guided excursion admiring wonderful scenery and tasting excellent wines. Your first stop is at the vineyards of the Lisjak family, in the heart of the Karst area, and growers of fine red Refosco grapes from which Teran, a superlative wine, is produced. You are going to try some of that together with a taste of delicious prosciutto. From here you continue to the Brda region, one of Slovenia's best wine regions with a fairy tale landscape of rolling hills and delightfully quaint villages. The entire area is a foodies paradise, with Mediterranean flavours being prevalent through the use of great olive oils, excellent fresh herbs and, of course, outstanding wines. At some stage you have an opportunity to climb the unusual panoramic tower in Gonjace offering, on a fine day, amazing views over the countryside as far as the bay of Trieste. Next to the tower is a memorial dedicated to those who died during WWII on the banks of the Soca River. On to the magnificent village of Smartno, an architectural jewel as well as a cultural monument. It's uniquely beautiful as a whole but you should also pay attention to its many exquisite details. Enjoy a liquor tasting followed by lunch in one of Slovenia’s most fabulous villas. There's one last wine tasting at the vineyard of Marjan Simcic, a family estate that has been growing grapes for five generations. Before your return to Ljubljana you will have a chance to stop along the stunning Soca River. This tour will, especially, appeal to foodies of all ages.

Developed on the foundations of more than 100 years of tradition, which began in 1908. Jozef Berc, became the owner of the farm estate. Today, the farm has been converted into a friendly boutique hotel, which is managed by the third generation of the family. Penzion Berc is situated in a quiet location in the middle of a dynamic and beautiful Bled landscape, which rises to the mighty and beautiful Julian Alps in the east. The hotel is only a 3-minute walk away - and a walk to Lake Bled takes the same. Bled city center is one of the most beautiful and oldest tourist resorts in Slovenia.

Prices are "from" per person based on twin/double shared accommodation and for travel in low season. Seasonal surcharges and blackout dates may apply. Limited seat/spaces and all pricing is subject to change and availability. Rates for single or triple travellers are available on request - please inquire.